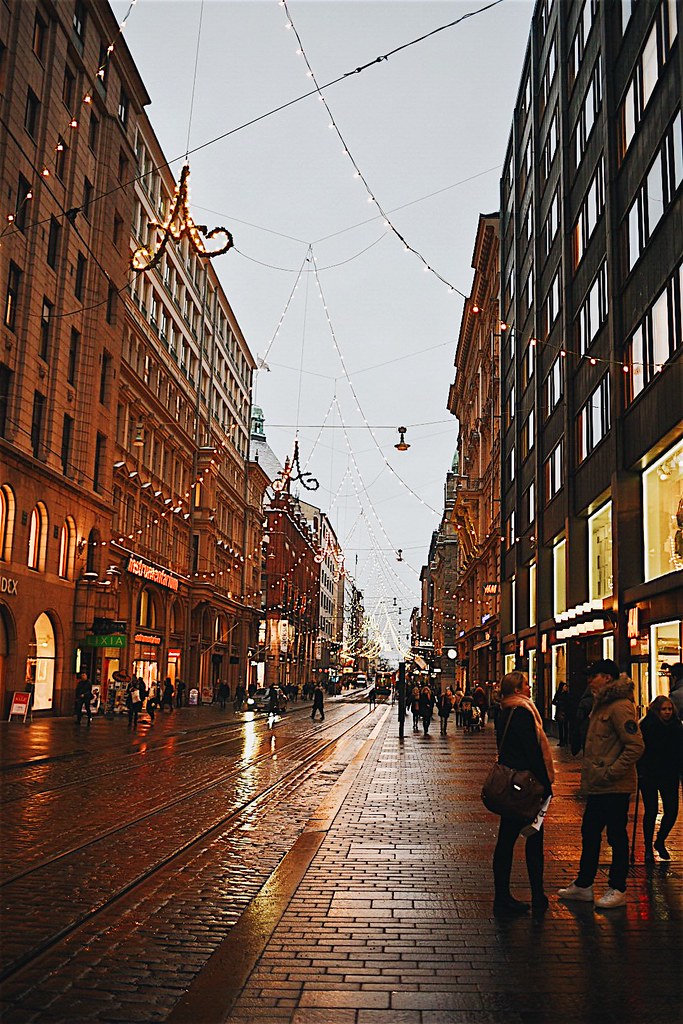 Helsinki, Finland
All photos taken with the Nikon D750 on a 35f1.8 lens

It’s only February, but 2018 is already shaping up to be the year of amazing meals. I am thinking in particular, today, of a wintery night in Helsinki dining in the softly lit Restaurant Krog Roba, a newish restaurant attached to Hotel Lilla Roberts of the Small Luxury Hotel group. It’s where the hotel’s daily breakfast was served so we were already acquainted with its cozy interior, and we returned one evening of our trip to try out their dinner menu, which turned out to be the best meal I personally had on this trip.

If you’re into seafood, Helsinki is going to be paradise for you. It goes without saying that everything is fresh, but you dont understand how fresh till you bite into your first lightly seared slice of salmon. Holy Smokes. That’s where it’s at. It’s not just the quality of ingredients, though, it’s also the care with which each dish is lovingly prepared. We actually ran into Karri Knaapila, the chef of Restaurant Krog Roba, on our first day in Helsinki at the fish market getting fish for his restaurant. I had the chance to chat with him for a bit before he rushed back to the restaurant, and he briefly explained his fish marination process to me. I must admit that I had no clue what he was talking about (except that it involved juniper berries and fennel seeds) because I am not well versed in cooking matters, but the way he spoke about his fish reminded me of the way my boyfriend talks about his favourite soccer team – with unparalleled love and affection. Alrighty, then. 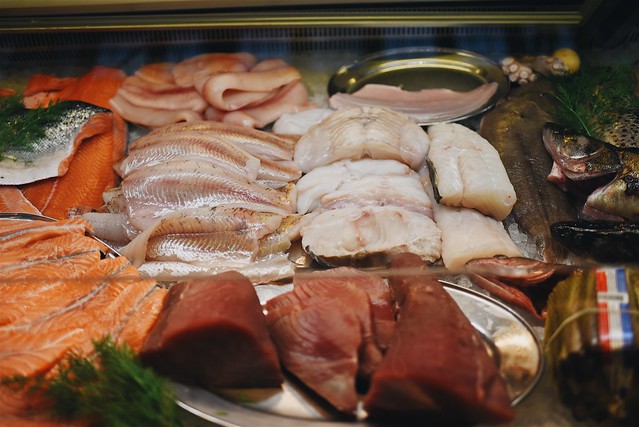 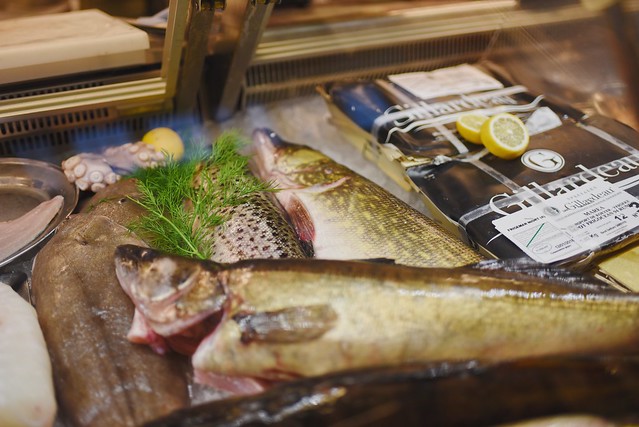 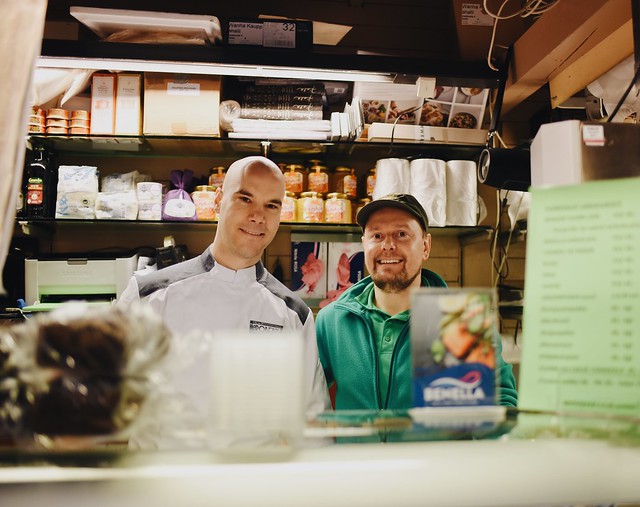 Chef Karri and his buddy from one of the fish market’s wholesaler stores – E. Eriksson. The chef swore that this was the best place to get fish – all the fish he uses in the restaurant is sourced from E. Eriksson!

On to our dinner itself, unequivocally the best meal I had in Helsinki. For context, we dined at two michelin starred restaurants in Helsinki, so we did have excellent meals throughout our trip. The Fins really know their way around food (on the other hand, my one brush with non-finnish food was a journey in disappointment). The point is, it wasn’t even that the michelin starred restaurants weren’t good – it was that our dinner at Krog Roba was so good that it eclipsed the other two for me. I dont think I am alone in this opinion either – the people sitting around me, a couple of which were pretty involved in the food scene, all seemed mega impressed with this meal.

I realised during the trip that white-tablecloth dining in Helsinki tends to be very tight and detailed, with a preference for three or four course meals over a longer dalliance of five to eight courses that many other cultures like. Krog Roba’s dinner menu is a four course affair – appetiser, salad, fish, dessert. I believe we had a special media arrangement since we were hosted by the hotel, but all these items should be available for ala carte dining as well. 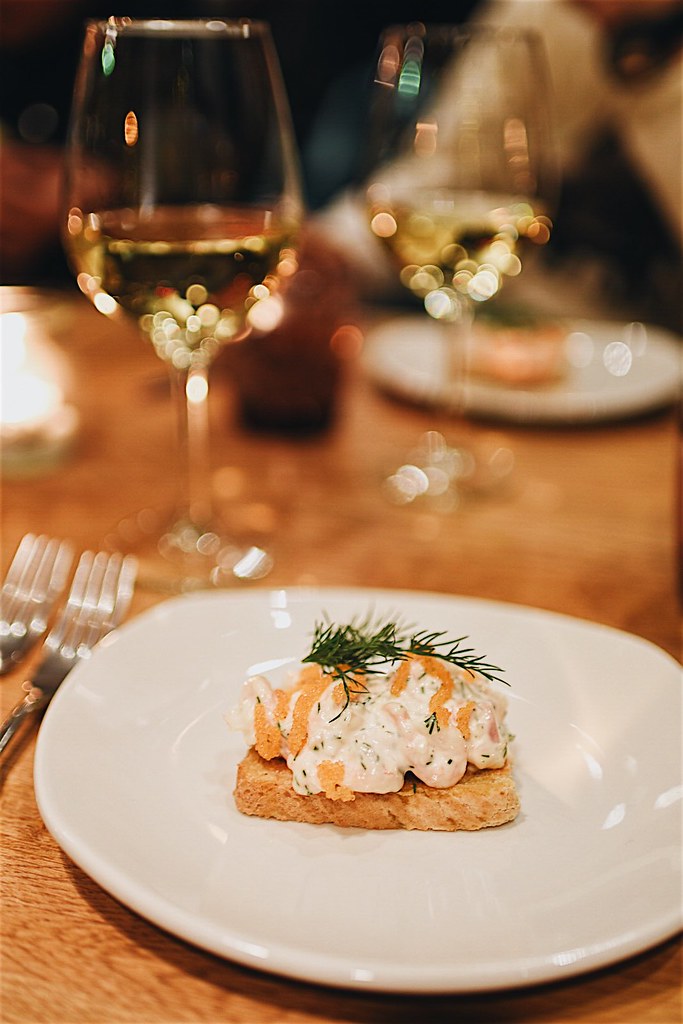 Appetiser:
Toast skagen with hand peeled shrimps. This is a classic Nordic appetiser, a kind of smørrebrød (open faced sandwich), and a great way to start dinner. The dish is infused and topped with dill, a recurring ingredient throughout the meal. I was wondering why the Fins love dill so much (literally, you hardly go a meal without having it in some form) and after talking to a couple of locals I figured that its equal parts the availability of the herb and equal parts health benefits. Dill is really good for your immunity system, and is known to boost digestion, help with insomnia, ease cramps, manage insulin levels, and so on. This makes a lot of sense once you take into account the fact that the Fins are some of the healthiest people in the world – and they all look mad young. I hung out with about three mothers who were twice my age but looked barely four years older than me. It was ridiculous. I am eating dill nonstop from now on.

Oh. And the toast bears a mention. The bread is IMPECCABLE. 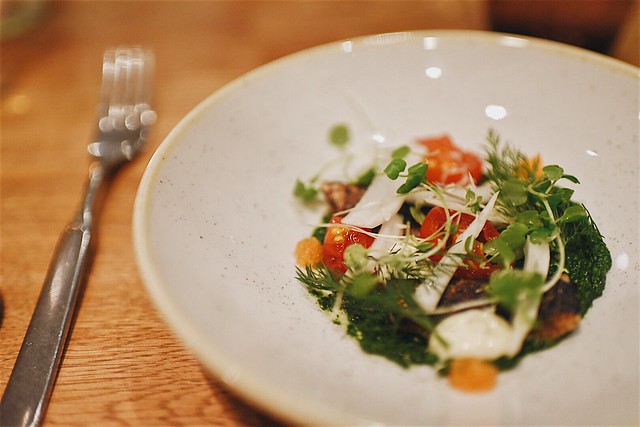 Starter 2:
This is mad fresh.
Sugar salted white fish, dill pesto and vendace roe – this is kind of like a salad, I guess, though they officially call it an appetiser. I am extremely partial to anything with pesto in it, because pesto is MAJOR YUMZ and also, I suspect, because good pesto is not easily available in Singapore. Therefore I get very excited whenever I see pesto in eateries abroad – in America, I sometimes ask for a side of pesto with my eggs even if my dish wasn’t originally supposed to come with pesto. And just a quick call back to the earlier ramble re: health benefits of dill, here we have dill pesto.

It goes extremely well with the sliced tomatoes, a heathy variation on the frenchfries-and-vanilla-ice-cream situation, if you will. And then there’s the cold water white fish, which was also very, very good. I was confused at first because my understanding of white fish is that it is a group of fish, not just one specific fish, but when I asked them it seems white fish is just this fish they always eat? I’m still a bit unclear as to what this means, but I suspect there’s a type of fish from Finland that they just colloquially label white fish. Anyway, the fish is sugar salted to make the meat firmer and thicker, then the top of the fish is lightly flamed just before serving which gives the fish skin an intensely delicious flavor. I was a bit sad that this dish was over so soon, but I guess that’s the whole point of a starter. 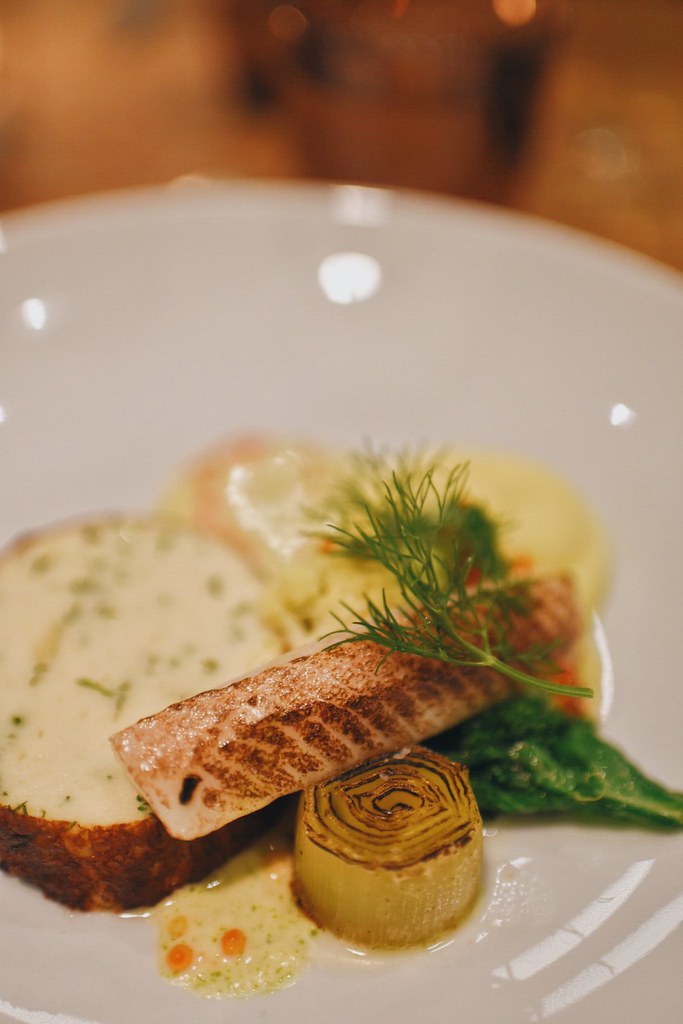 This is the chef’s signature dish. I actually dont think I’ve had Pike before Helsinki. Pike is a kind of freshwater fish which the locals call the ‘monster of the lakes’ – Chef Karri actually pointed out a Pikefish to me in the market, and it was huge. Pike and Salmon are what Lapland is known for, fishing wise, and Pike in particular is Krog Roba’s signature ingredient. In this dish, the slice of pike is seared, then served with pike fishcake, which is minced with cream and egg, then seasoned with dill and lemon to make a literal fish cake. This is so different from anything we have in Singapore! I ran a search on it later on, and realised that it’s uncommon because it’s infamously hard to cook – which is a pity, because when it’s done right the way Krog Roba does it, it’s delicious.

It’s also interesting that the same fish is done two ways in one dish, which really shows the skill of the chef in using different permutations to bring out the flavours of the Pike. As a fish, it’s not as fatty as, say, salmon, but it still has a very clean, mild taste, firm and slightly chewy, which I assume is what makes it so versatile. In any case, I’m glad I had it here, because it was a super first experience with Pike. 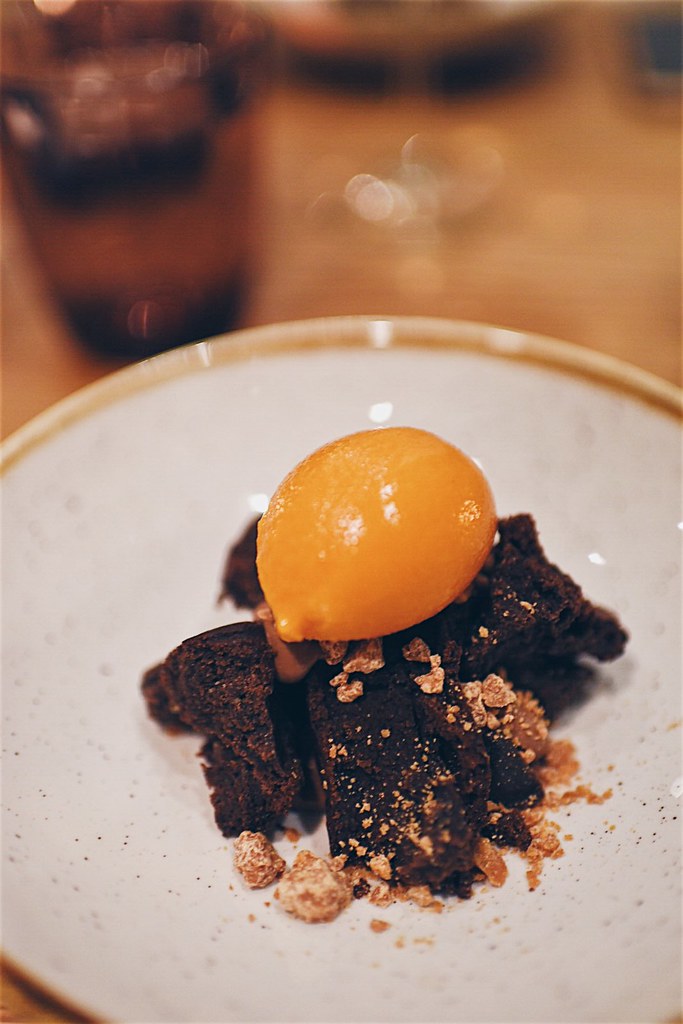 Dessert:
Chocolate cake with sea buckthorn sorbet. I’m not a huge dessert person but this was SO good! Theres not that much I can say about chocolate cake that hasn’t already been said – this one is more like a dense brownie than a cake, really, and it’s a solidly yummy one at that. But the real genius is in pairing it with sea buckthorn sorbet. Sea buckthorn is something you’re unlikely to have ever tried before – I’ve never even seen it used in anything, and I dont think it’s popularly used in most places. In any case, my first encounter with sea buckthorn was in Helsinki. And what an encounter! In line with the city’s health is wealth mentality, Helsinki LOVES sea buckthorn. It’s used in juices, energy shots, eaten as is, used as toppings for desserts, blended into ice cream.. mainly because the berries are insanely high in vitamin C. One of our tour guides said she freezes the berries and pops a couple each morning, and she hasn’t fallen sick in five years. That’s insane. I mean, if you think about how freaking cold Helsinki is, that really is insane. 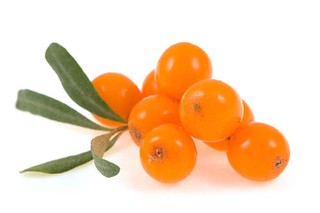 These are sea buckthorn berries

The berries, though, are mad sour. This is actually very pleasant for me because I dont have a sweet tooth, and I love the biting taste of sourish berries and fruits. But I might be alone on this – many of the other people in our group blinked very hard when they first popped a berry, and then visibly got a bit red. Also, when I went to the market alone to try and buy a bottle of sea buckthorn juice home, the shopkeeper looked at my obvious tourist-asian aesthetic and tried to warn me away from it. Only after reassuring her that I’d tried it several times and liked it did she feel happy to make the sale, which left me both pleased with my purchase and mega impressed by her sales ethic!

But I digress. The point is that, given the extreme, extreme sour-ness of sea buckthorn, one can only (rightly) imagine the kick that a sea buckthorn flavoured sorbet will have. I greatly enjoyed this: I dont have much of a sweet tooth, so I think I could eat this all day. Even better is the fact that this portion of sorbet contains all the vitamins one might need for a day – imagine being told that your daily vitamin shot came in this form!! The sorbet also complements the dark chocolate cake beautifully, and ended the meal off on a satisfied, refreshed note. 🙂

And that concluded dinner. The best meal I had in Helsinki, too. I thought about it afterwards, why this meal impressed me so much, and I think it’s partly the freshness of ingredients (both in terms of literal freshness and freshness to me, so many things i tried were brand new to my palate) and partly the extreme care and detail with which each dish was prepared. None of the ingredients or garnishes used were superfluous, and they all obviously served some kind of purpose, either in terms of complementing/enhancing the other flavours in the dish or in terms of boosting certain healthy agendas. And yet in all this, taste was never compromised – all four dishes felt like the perfect materialisation of what the recipes called for, absolutely compact and delicious. I know it’s a weird parallel to make, but for me, the meal was like reading a really good academic argument – totally tight, beautifully composed, and enriching. Is it a weird parallel to make? Aish. Who cares. That was what it was like for me. Find your own parallel, if needed.

The ala carte menu changes seasonally, four times a year, so these exact items may not be available if you drop by – but my experience at Krog Roba for multiple breakfasts and this amazing dinner gives me confidence that the restaurant generally serves excellent food all year round. x