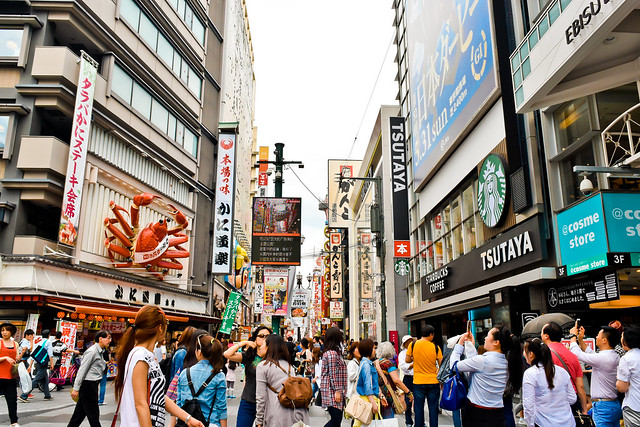 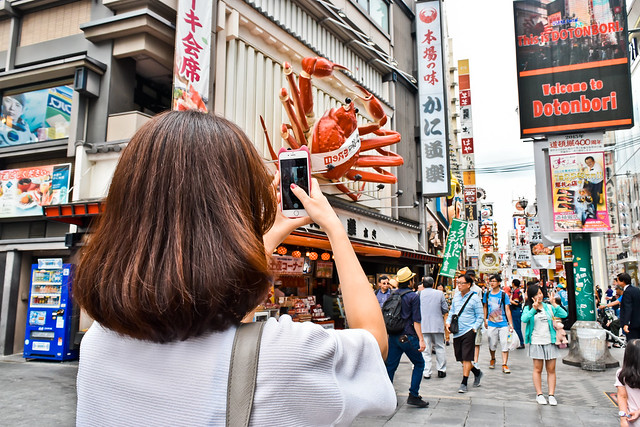 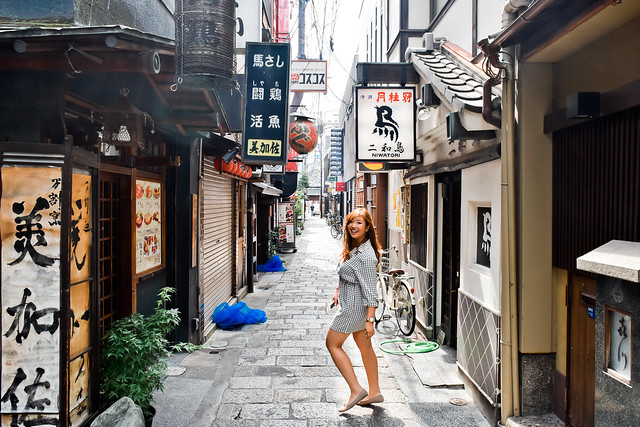 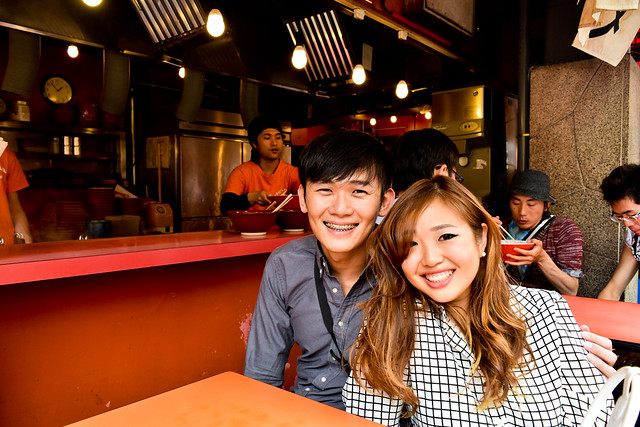 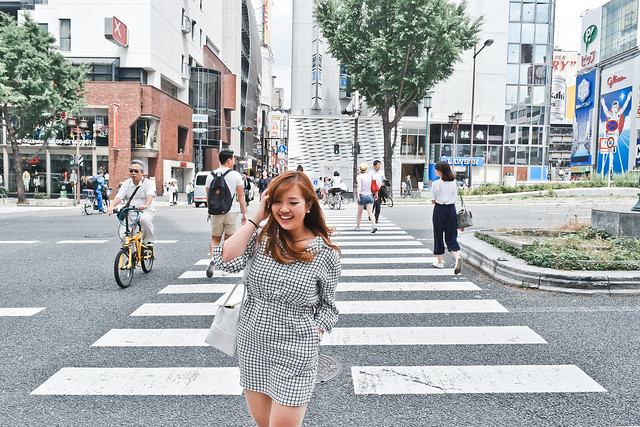 Osaka, Japan.
All photos taken with the Nikon D5500
Osaka is weird. It’s no Tokyo, that’s to be sure, but neither is it stuffed and sewn with culture, like Kyoto. Instead, walking along the streets of Osaka, giant plastic figurines pour out of the side of buildings and reach down to you, crawling out of windows and smiling creepily at the passerbys down below. Quirky is one word to describe it. Weird is another.

Either way, I liked it. I think I would be hard pressed to find a place I didn’t like – as far as things go, I’m a relatively easy traveller, generally happy as long as I’m safe and the place has some sort of distinctive character. I didn’t fall in love with Osaka the same way I did Tokyo, but a strong liking is good in anyone’s books, mine included. 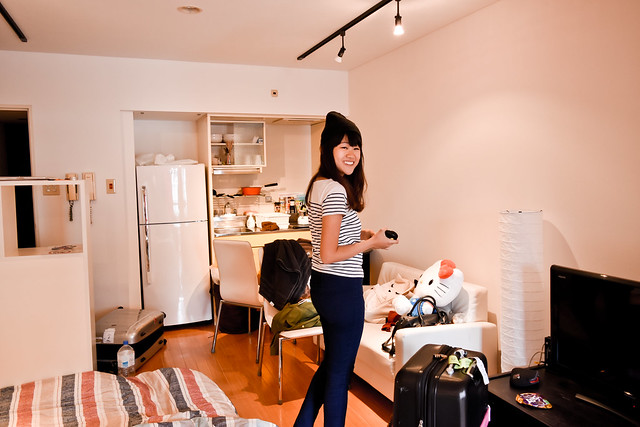 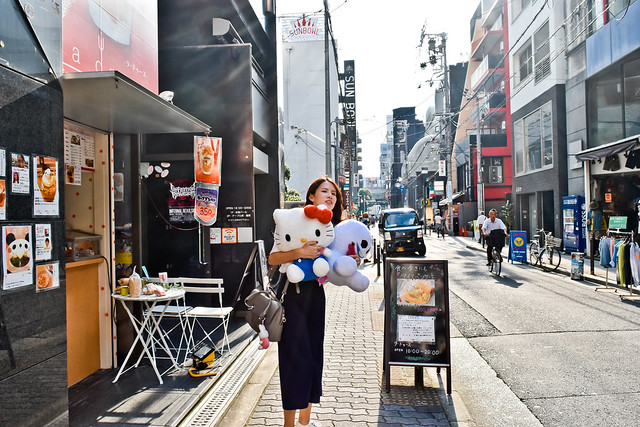 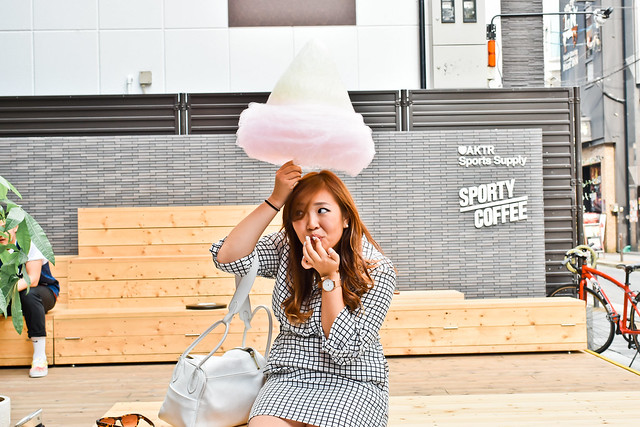 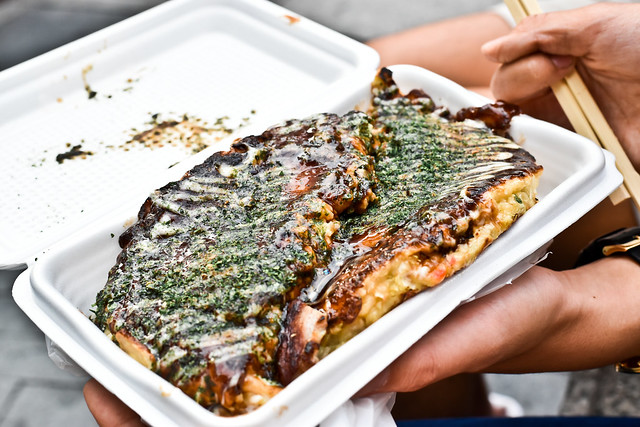 We picked an apartment on Airbnb as usual, and stayed in the centre of Namba, the main shopping district in Osaka where things happen, where the weirdness centers.

If location is key, the apartment we stayed in was the listing to end all listings. For a location as perfect as this, I would have been happy with even the most pared down of apartments – but it was a major plus that the apartment was cozy, comfortable, and borderline luxurious for a self sufficient studio in the city centre. 10/10 would recommend. 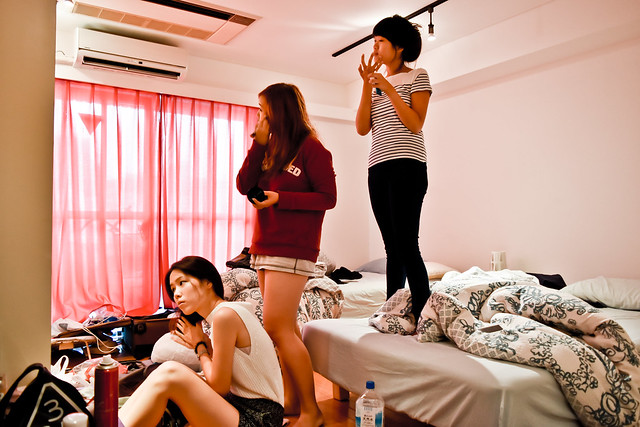 Us girls getting our make up done in the mornings
The place comfortably fit the five of us, and was smack in the centre of the city. I dont think I can stress enough how convenient the place was, and how crucial convenience is to picking accommodation on trips. At every hour we could leave the apartment and there would be something to do along the streets downstairs – we could karaoke, we could bowl, we could snack, we could do a ton of things. It was incredible. We were never bored in Osaka – but then again, I think it’s impossible to be bored in Japan, ever. The place is a hotpot of entertainment, every corner eager to please. 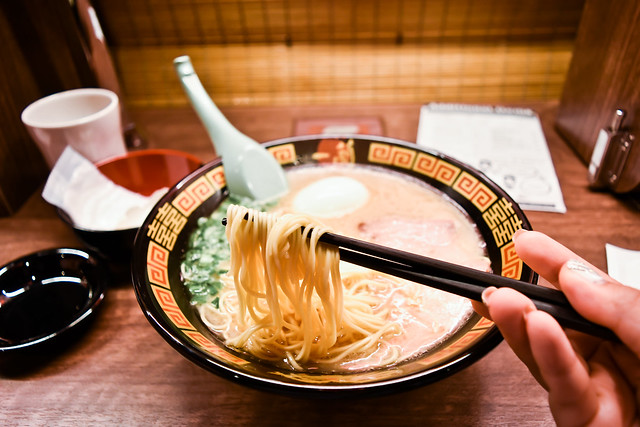 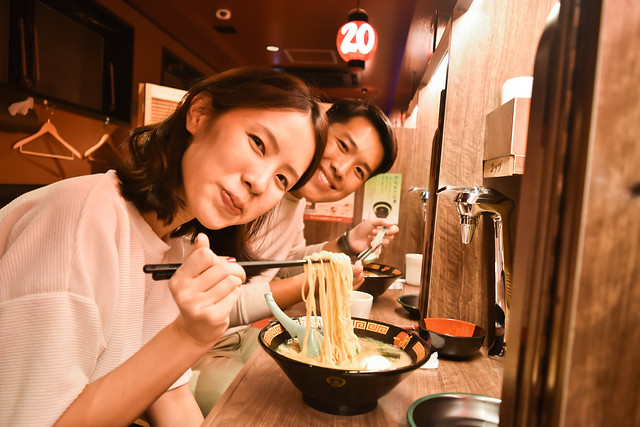 There was an Ichiran near our place, which was awesome 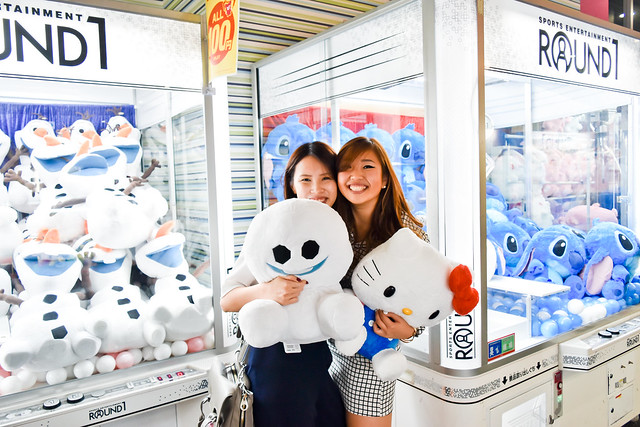 Osaka was also the place where I had my virgin success at the Claw Machine – the first day we touched down, burning time while waiting for Penny to join us (she was coming from a different part of Japan), we walked into one of the many arcades that litter the streets of Osaka. Initially we were just going to try once just for the sake of it, because we were in Japan, but as I was walking out someone at the next machine won.. which meant the machines weren’t rigged!!!

Thus began the demise of my life savings.

Just kidding. I spent a good hour there clunking away at various machines, and finally won a giant Hello Kitty plushie which now sits proudly on my bed at home because it is the result of a LIFETIME of failed attempts at Claw Machines. I know I spent over 1000 yen but under 2000, which meant that the Hello Kitty plush cost me about 20SGD, and that’s totally ok with me because it also comes packaged with the sweet, sweet taste of success.

So if nothing else, I remember Osaka for this: validation and assurance that I do have minor successes in life 😀 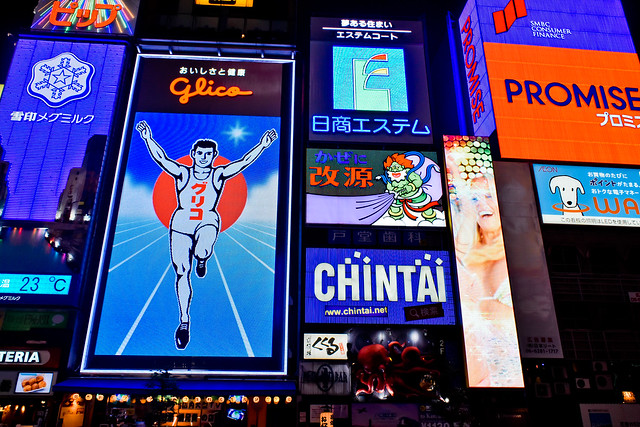 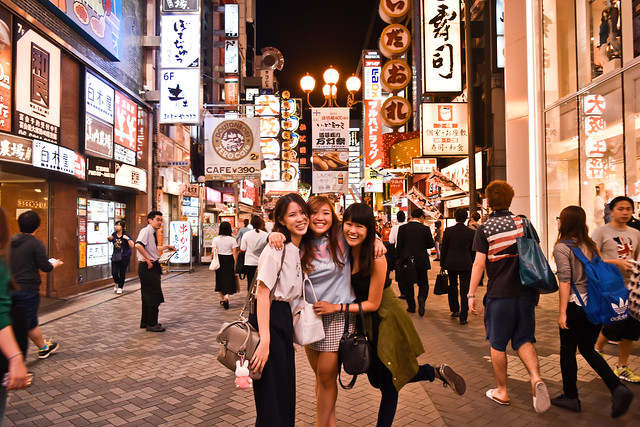 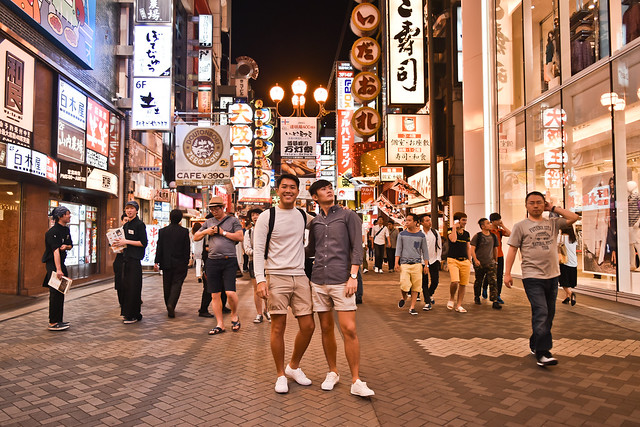 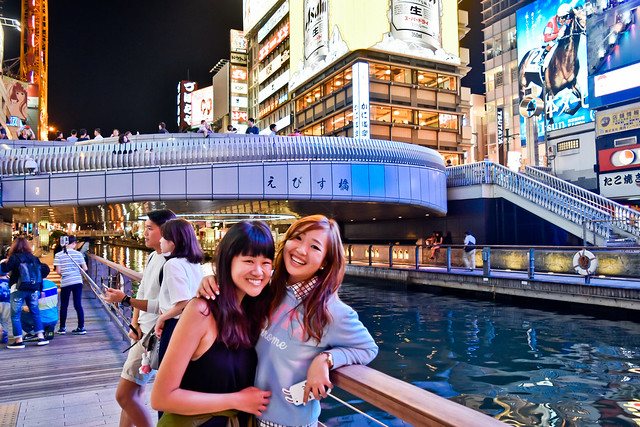 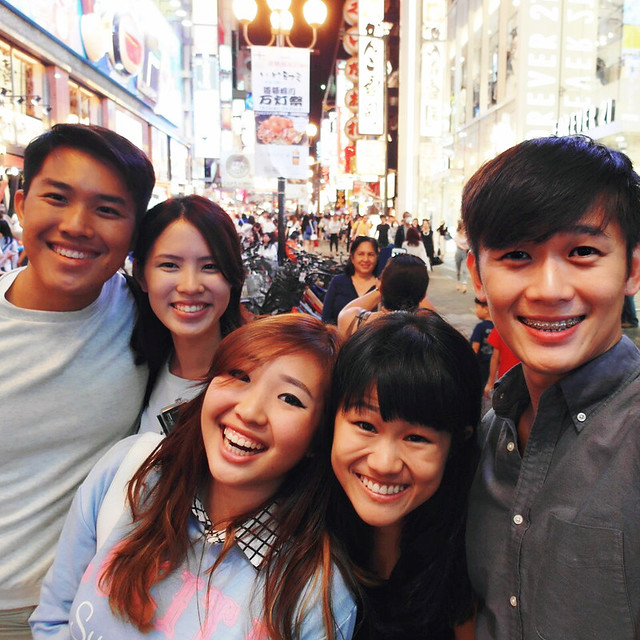 Namba at night
On retrospect, I think the city reminded me a little of a mix of Tokyo and Seoul. Obviously Japanese, but pace-wise similar to the capital of South Korea. Growing up on a diet of Asian teledramas has resulted in me putting asian cities on a sort of pedestal when it comes to nighttime scenes – walking happily down glowing streets, stalls steaming with various smells and bustling with cheerful noise on both sides, people generally being happy to be where they are, couples eating mochi, bright eyes reflecting the city lights all around. I love Asia, I love Asia at night, and I’m glad to say that Osaka was the same for me. 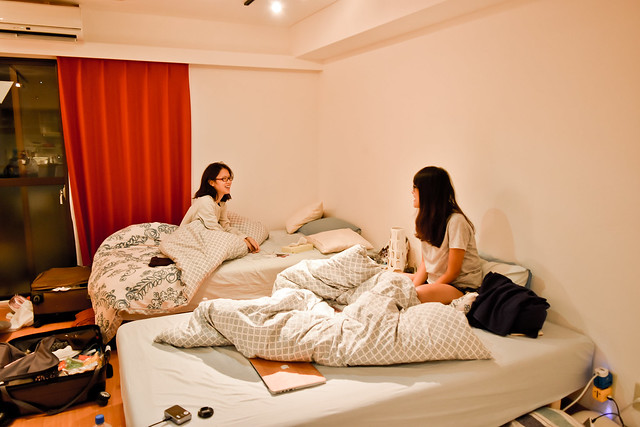 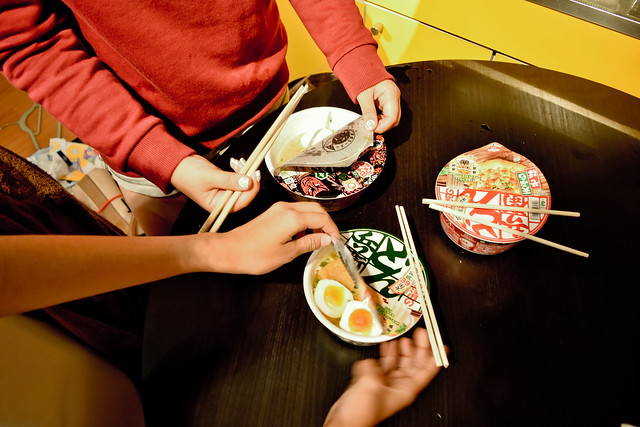 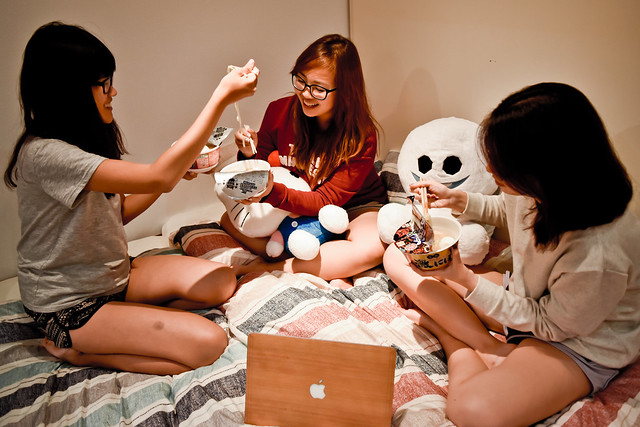 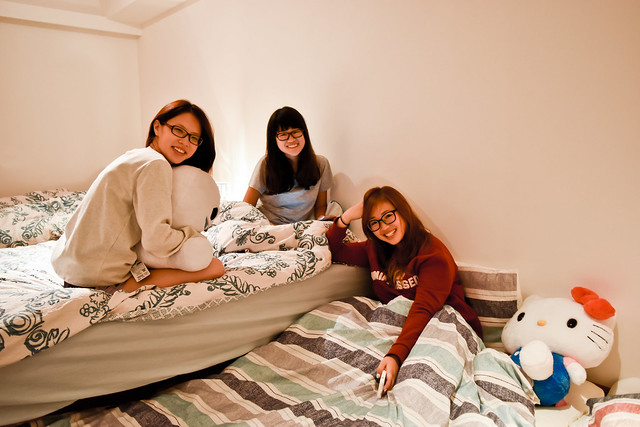 cozy nights in our airbnb place
Another thing – growing up, I was never allowed to have sleepovers, either at my friends places or mine. All class chalets ran till 10pm for me, after which I had to make my way home. Osaka for me was additionally special because it ran like a giant girly sleepover – even with the two boys there, we had a lot of fun just rolling around and having heart to hearts that ran late into the night. Huge props to the company and setting – I dont think I could have done Osaka any better, bookmarking the end of my undergraduate life with the people who’ve been there throughout. x 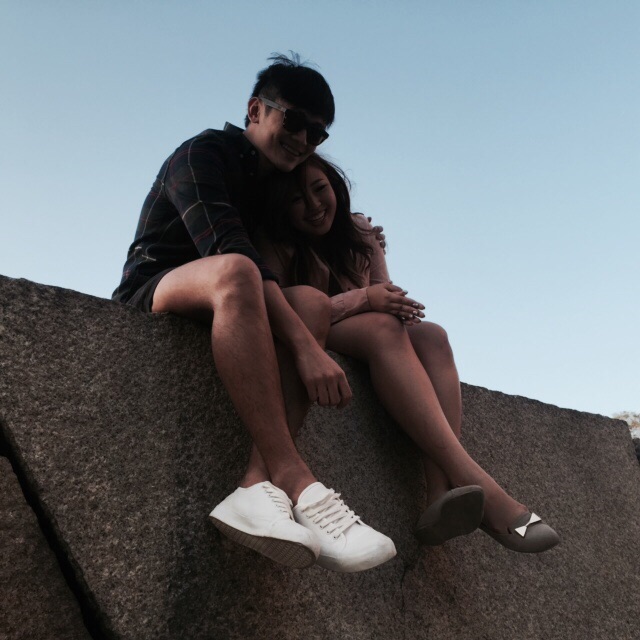 Thank you Airbnb Singapore for the perfect apartment – all of us adored it to no end!