moving is, not to put too fine a point on it, bloody stressful. over the summer i had to mindmap my way through a three-way move, my life’s possessions triangulating between NYC, Singapore, and the Bay Area, living largely out of a suitcase. the number of excel sheets i had to make, seriously. and dont even get me started on visa and administrative issues! so much homework to be done, except then the stakes are that if you get it wrong you might get deported, ha ha ha.

i probably shouldn’t joke about that lmao.

I finally found a place and signed a lease, which honestly, is an amazing feeling. Despite moving around so much, I like having a place to nest in, to call home. I like putting things on the walls and having my notes be scattered haphazardly while working, and being able to go to bed and wake up and find them in exactly the same order of chaos as they were the night before. I like living with my partner, who dithers around the house in his own happy routine, the both of us mindlessly stopping for a hug as our paths cross in this mostly-square apartment before continuing on to whatever we were doing before — him, drawing, me, reading or writing, usually. And I love this apartment — it feels like the best kind of cliche; we viewed so many places, but when we walked in to this one, we just knew. 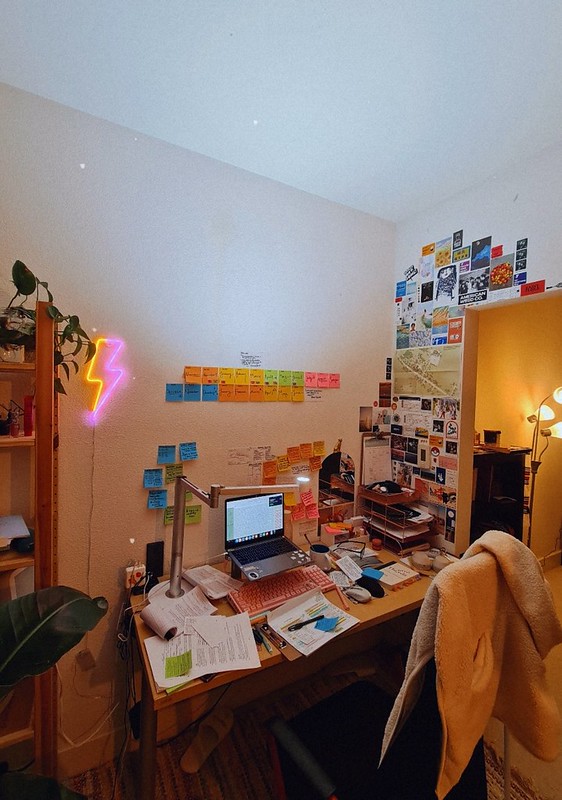 I also got to work immediately setting up my work cave. After working off a tiny desk for years… i nearly cried when I scored this baby. 30 bucks secondhand (it used to be a craft table for a woman who does a lot of work with… yarn), this baby is all fake wood and 60 inches long! Which I filled up right away of course. I’m in a fever for desk space the way some people are for romance or the smell of soft leather. When Shane and I settle into a permanent home someday I shall have a desk that stretches from wall to wall.

– the shower water comes out hot immediately. For the first time in three years I’m not doing that strange naked hoppy freezing dance while waiting for the water to heat up
– no bugs. though this might be more of a California thing.
– in-unit washer dryer! turns out i dont hate doing laundry, i just hate trudging through the filthy streets of manhattan with a sack of clothes over my shoulder while knowing that the lint in the laundromat’s washer hasn’t been cleared in probably eight and a half years
– all the furniture is exactly where i decided it would be. after living with three boys, all of whom had a vote in all things home-related, it’s really nice to just make a decision (the correct decision) on how far the dining should sit from the wall and have that be it. and i haven’t stubbed my toe on a random table or chair corner, once.
– many power outlets. like there’s one every five steps, which seems excessive even to me.
– so much natural light! part of why my rent was so low in NYC was because my room — the cheapest in the house — had zero natural light. it was like living in a little electronically lit cave. sometimes i would knock on the boys’ doors and ask to sit in their expensive sunlight for a bit and they would joke about charging me rent and i would laugh and not pay it.
– the elevator moves really fast
– there’s a roof! which I’ve been to like, all of two times.