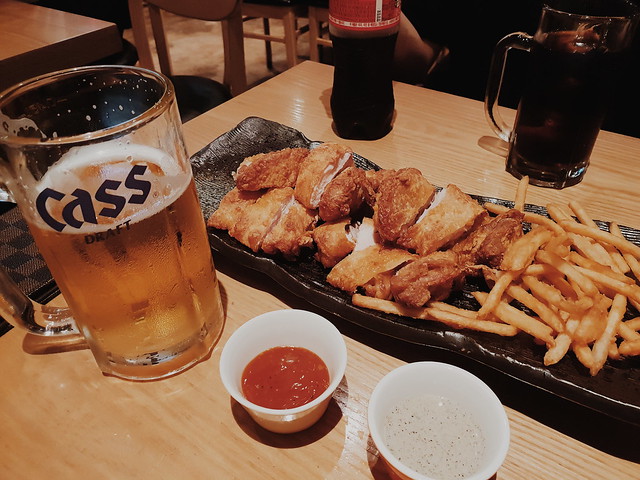 Seoul, South Korea
All photos in this post taken on the Samsung S9
Is it totally excessive if my first post about Korea this year is about fried chicken? Is that terrible? Does it really matter? Here are the questions I preoccupy myself with, these days. Anyway, anyway. I just had to jot this down before time passes and weathers away the intensity of my current emotion, and I start to second guess myself and wonder if I really meant it when i thought one fine evening in myeong dong that it’s true, all that they say about knowing it’s love when you find it, like how after six trips to seoul i have finally found and fallen in love with the best fried chicken i have ever had in korea.

The name is Noona Hol Dak Oven Chicken and Beer, and the game is oven baked crispy chicken. Martin and I were wandering the streets of korea looking for a quick dinner so we could get back to work, it was an unfocused sort of wondering, guided by a general trust in the infallible quality of korean food. We were talking about something idealistic and dreamy, like how this trip was kind of exactly like what our future lives would be like if we moved abroad for work and became housemates – meals together, and then working on our individual projects silently in each other’s company. We were marvelling in the delights of adult friendships that weren’t bound by institutionalised obligations (school, work); the pure joy of comfortable companionship. We looked up and found ourselves in front of Noona Hol Dak.

Noona means older sister in Korean he said, with a sense of epiphany.
I said, Maybe this is like one of those themed maid cafes in Japan and some noona will give us chicken 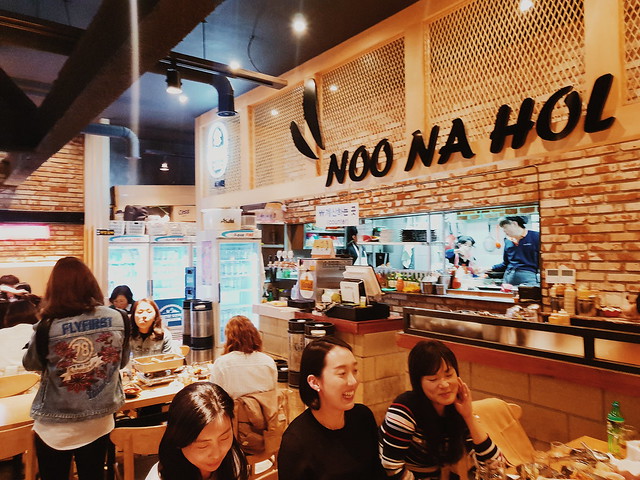 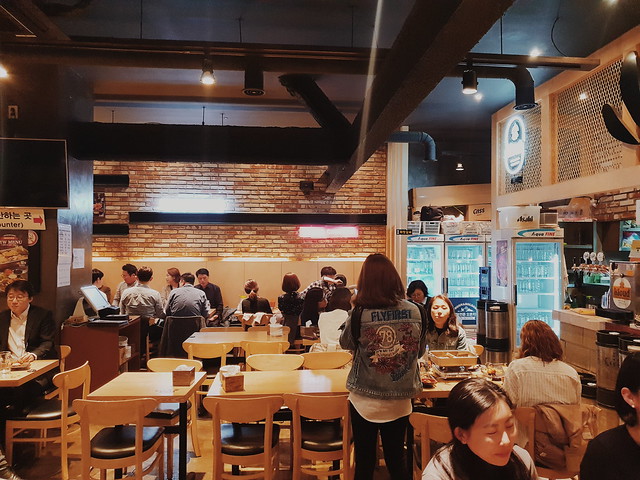 Super bustling place even though it was past prime dinnertime
The place was buzzing, tipsy korean businessmen were shouting happily at noisy sorority girls, office ladies were trying to get the server’s attention, some kid was looking for the ketchup tray. And above all, the crackling of fried chicken skin being bitten into, everywhere. Martin turned to me: this place looks amazing. I nodded, taking credit for the place as if I made the chicken myself: thanks, I know.

We ordered the most basic thing on the menu, a plate of boneless crispy chicken to share. I had a beer, as I do. Martin had a coke after trying to ask for a coke zero and giving up after failing to communicate exactly what a coke zero was. No one in Korea knows what coke zero is, he complained, normal coke is so unhealthy and I stared at him. Martin, I said, we’re in a fried chicken joint.

More ineffectual conversation that I don’t remember, etcetera etcetera. If we had said anything of importance in between ordering our food and it’s arrival, neither of us remember the details: everything was overshadowed by the arrival of the chicken, which was squarely planted on our table by a korean uncle (there goes the noona concept). I took a bite and I think I blanked out for a bit. When I remembered where I was, we were already halfway though the plate. I’m confused, I said, with reverence, by how ridiculously good this is. Martin didn’t reply: he was chowing down. 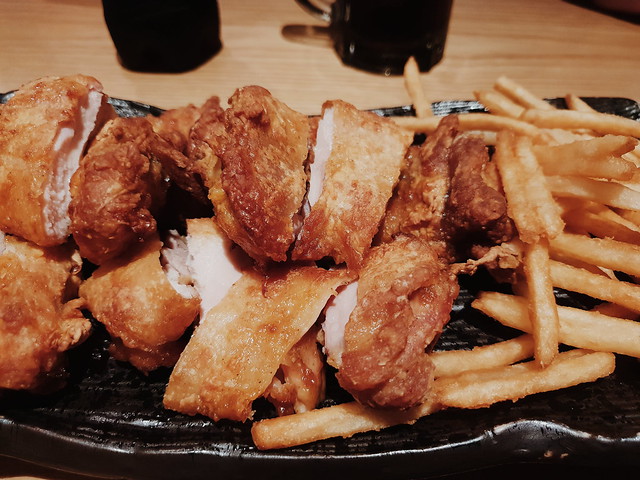 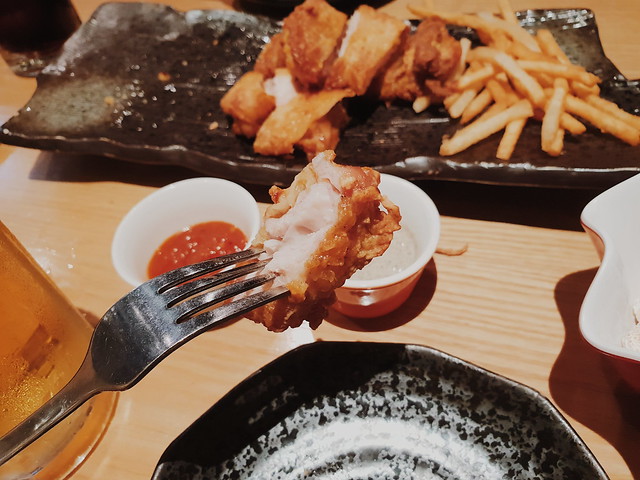 national jewel of korea
It’s hard for me to explain why food is so good when it is. I have a million and one ways to complain about bad food, but when it’s good, I’m usually just stunned into silence. I dont know the specifics of food science, I dont know what makes it specifically good. For this dish, it might have been just the fact that something so simple was so damned well done. The chicken was juicy and tender, the skin was crisp and cracklin. The fact that it was baked gave it the illusion of being healthier than straight up fried chicken (though i have my doubts about the truth of this hypothesis), and after we were done with the meal, neither of us felt stuffed nor guilty. We left the restaurant feeling pretty proud of ourselves, in fact, for having a satisfying meal that wasn’t excessively filling.

I’ve had fried chicken in korea before, obviously, but for some reason I have never been rendered this speechless by a plate of chicken. I have spent the past few hours wondering on and off why I was so impressed by this: I think perhaps it is because it hits the sweet spot between incredible food and a good price point (if it were a hundred dollar meal, would I feel the same way? Who knows – but I suspect my own principles won’t allow me to ever pay a hundred bucks for fried chicken). The entire meal – oven fried chicken, a beer, a coke, cost a total of 23,000 won. Writing that down now, I feel an unreasonable sense of pride, I am so pleased with myself for paying essentially twelve singapore dollars for my share of a damned good meal. Am I hyping this up too much? Am I setting everyone else up for disappointment? Doesn’t matter right now – in this current narrative, the best chicken I’ve ever had still blows my mind. Yum, essentially. Yum and yum.