#2121| “Coco” is the most important animated film this year

When I was 10, I was sitting in a dark theatre with my parents, two hours into a movie, and I heard a sniff. Scrap that: I turned around in my seat and the entire row behind me was a hot mess. Tissues were out, tears were streaming, some people were openly bawling. I looked up: my mother was next to me, staring straight ahead, eyes glistening. I think it might have been the first time I saw my mother cry. The year was 2002, the movie – I not Stupid by Singaporean filmmaker Jack Neo.

Since then I have bawled at many movies, but no movie has had the same effect on me: entire rows behind me, eyes wet, openly crying, all of us sitting in the dark and communal in a kind of vulnerable, open emotion. That is – not until Coco.

I was in San Fran for the Coco Country day last month, an immersive full day experience at Pixar Studios Emeryville dedicated to understanding the process behind the art, research, and animation, as well as running interviews with pixar employees and the filmmakers. I got very excited over the technical aspects of the film there – the art direction is brilliant, the film is a visual spectacle, and the fact that it was created by the same team that brought us the Toy Story franchise was also very promising. They had just finished the final version of the film the friday before I reached, and so we watched a 20 minute screening whilst there, which was just enough to confirm the above: gorgeous, vibrant, engaging, etcetera.

But when I watched the movie in its entirety back in Singapore? I was blown away. 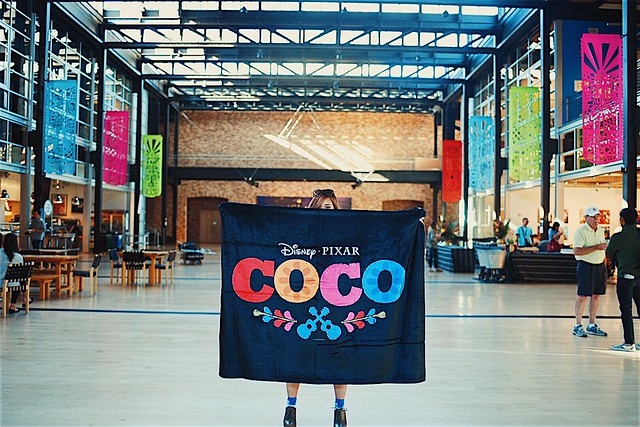 The best Pixar films in my opinion have always been able to operate on two levels – the first being a straightforward (yet enchanting) story, the second being a unique ability to offer insight into some aspect of human nature. The Toy Story franchise explored the parent-child bond, Wall-E commented on the human tendency towards unchecked excess and its consequences, and UP was a touching ode to the process of ageing. All of them also operate at a basic level of technical excellence, dont get me wrong, with cinematic technique that classify them more as animated films than simply being cartoons. But they’ve always been able to tap on a deep emotional and dramatic vein, and that is what has made the most successful of their films so iconic during their Golden Age.

And at the end of Coco, I found myself wondering if this might just be the film to bring the Golden Age of Pixar back.

The film is set against the annual Mexican celebration Día de los Muertos, or Day of the Dead, which is a celebration of life, and a display of respect and love for deceased family members. It’s a day of family festivities, and in this particular story, we follow twelve year old aspiring musician Miguel Rivera growing up in a family which sees music as a curse (this is explained at the film’s beginning with some exposition about his great great grandfather walking out on them to pursue a musician’s life). Despite this, Miguel makes the decision to pursue his passion for music, and things get a little complicated when he steals a famous musician’s guitar and gets transported to the actual land of the dead. His hero’s journey, then, is figuring out how to return to the land of the living by obtaining the blessing of his idol, a (dead) suave musician who uses too much hair gel, before the sun rises and he’s stuck in the land of the dead forever. 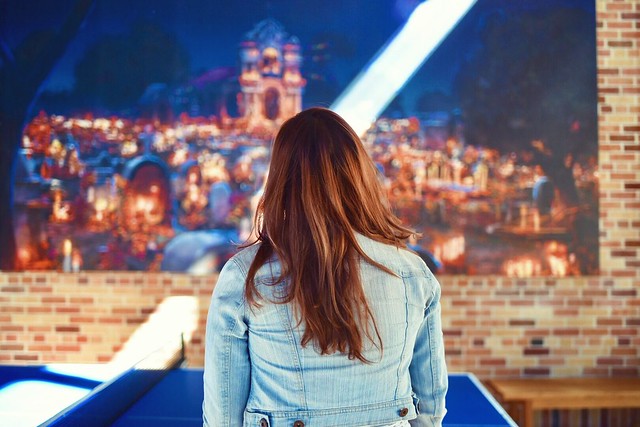 When watching any film, the first thing that strikes an audience is the technical proficiency of the storytelling, and Coco is a visual feast. A good 70% of the movie takes place in the land of the dead – who knew animated skeletons could look so expressive? – which gives the filmmakers space to be visually creative with the rules of the underworld, and the result is a dazzlingly rendered cinematic universe. The graphics are accompanied by a solid soundtrack – Disney Pixar for some reason won’t officially call it a musical film, but that’s what it is to me. The soundtrack is fantastic (scores by Michael Giacchino – Ratatouille, Inside out, Zootopia, Doctor Strange, Rogue One, Spider-Man: Homecoming, UP, and so on) and it really shows off amazing vocal range from the cast. Goosebumps when they break out into song, all around. The story itself is also compelling – it’s the classic chase-your-dream story, with heavy emphasis on familial love. This recurring theme of familial love turns out to be the strongest emotional bloodline for Coco, and different iterations of this resonate throughout the movie – the overwhelming love that teeters on suffocating, the idea that family knows best, and the young protagonist’s struggle between finding his individuality while balancing his love and respect for family. At the end of the day, the cumulation of all these things climax in a beautifully emotional sequence that will play your heartstrings like a fiddle. And as the credits roll, you think, damn, Pixar has done it again.

So on that level, the film is already a triumph. It is emotional and beautiful and yes, it will probably make you cry.

But on another level, the film centers itself as iconic in today’s world because there is no considering Coco without a subtle nod towards the political situation in the West right now. In a time when the real world threatens to build walls, Coco’s animated world sings it down, Jericho-style. This is the first film Pixar has released since Trump became president, and while it doesn’t directly comment on politics (how can art, really?), it’s a film designed to make you fall in love with Mexico and it’s rich culture. Disney’s recent movement towards a more diverse, inclusive storytelling world has never been as straightforwardly laid on the table as it has been with Coco, and yet, the filmic universe surreptitiously charms the viewer into being immersed into a world where the humanity of interpersonal relationships is key. When the film concludes and we are left with the hot mess of today, you can’t help but feel a sense of nostalgia for the animated world you were invited to participate in for a short moment. And if anyone really needs it spelt out, director Lee Unkrich has famously called the movie “A love letter to Mexico.”

You can feel it whilst in the film, too. Coco is the first Disney Pixar film to feature an all-Latino cast, but beyond the voice actors themselves, the set designers, show runners, and technical designers all hail from various backgrounds, and all of them emanate immense pride at being part of this project. The film itself is a celebration of Mexican culture – beyond the obvious reference to the biggest annual Mexican celebration, the film highlights other aspects of Mexican culture as well: the traditional ofrenda (family altars that welcome the spirits of your loved ones back to the land of the living), the recurring image of the magnolia (a mexican flower) as a bridge between the land of the living and dead, the heavily featured Alebrijes (colourful fantasy Mexican spirit animals), and even the protagonist’s animal sidekick that isn’t randomly chosen – it’s a breed of Mexican hairless dog called the Xoloitzcuintli. There is an insane amount of care that has obviously gone into making sure the film represents the culture and celebration accurately (Disney hired cultural consultants, and the filmmakers made multiple trips to Mexico for research), and even then, Lee is quick to state that he is not trying to make “the definitive Mexican movie” – he’s just telling one good story, and hopefully more will follow. 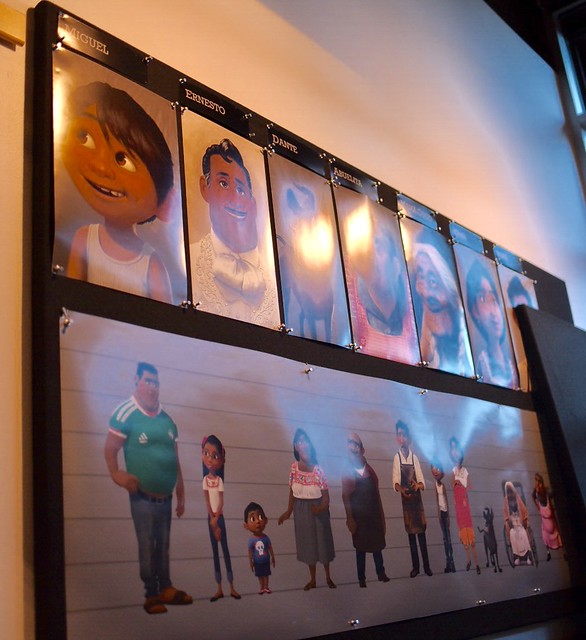 Character design for Coco, pasted on the walls of one of their meeting rooms

As an audience member born and based in Singapore, the amount of contact I have had with Mexico to date remains minimal and firmly limited to the F&B realm. Coco dazzled me with it’s fully realised and vibrant universe – and I enjoyed it so much that it made Mexico, a place I’d never been to before, seem so real to me that I felt close enough to reach out and join the Rivera family’s group hug. And I can only imagine how important the film must be for Latino children all across the world. Pixar’s greatest strength has always been the creation of emotional empathy while making a larger point on humanity (read: the hidden message in pixar films), and now they are using this empathy as a means of showing solidarity in a divisive time. I am here for it is what I am saying.

Coco is not the first film about Mexican culture – Daniel Craig’s SPECTRE 007 opens with a Day of the Dead sequence shot, Once Upon a Time in Mexico (2003) has a scene sequence featuring the festival, and 20th Century Fox’s 2014 animated film The Book of Life also gravitates around Dia de los Muertos – but the fact that it’s Disney Pixar doing it does make a strong statement that immediately cements the film as iconic. Here’s to hoping Coco opens the floodgates for more films celebrating different cultures to take centerstage, but for right now: may we all sign off on this love letter to Mexico.