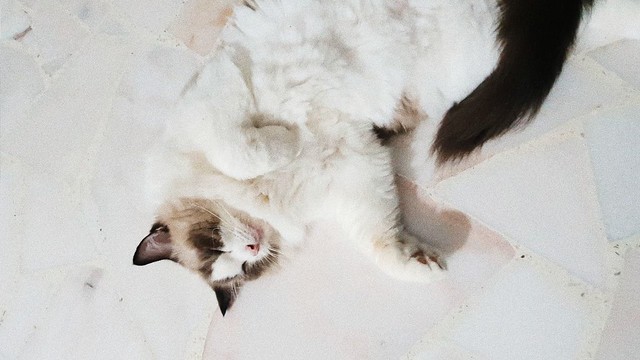 I’m not an insecure person but with Athena, I always wonder. My boyfriend’s brother keeps sending me articles that supposedly prove the evil nature of cats. Apparently they mew to imitate baby noises. Apparently they know it tugs on human heartstrings. Apparently they dont make that sound at any other animal. What do you what do you what do you make of that. Well the honest truth is I don’t like babies, I find them scary, but when Athena mews I come bounding. Her affection feels like currency on a volatile stock market. I’m always trying to hug her and she’s always giving me the side eye. But one day she came and sat on my lap when working and I nearly peed myself in wonder. She loves me! I hissed. Shane took his phone out to capture the moment but she had already walked away. We joke that she hates everyone. That actually she doesn’t, that this is just her face. That actually isn’t she the same breed as grumpy cat. That actually isn’t she the cutest thing you’ve ever seen, so cute that when she looks at you you just want to curl up and die, that when she gives up walking halfway because she is too lazy and flops sideways on the floor it’s the most adorable thing in the world, that when she gets scared by her own reflection in the mirror it’s the funniest thing, so funny you can’t stop laughing, for hours and hours and hours. What do you make of that. Is she a smart cat or a stupid one we can’t even tell. Athena keeps eating plastic and I don’t know what to do about it.