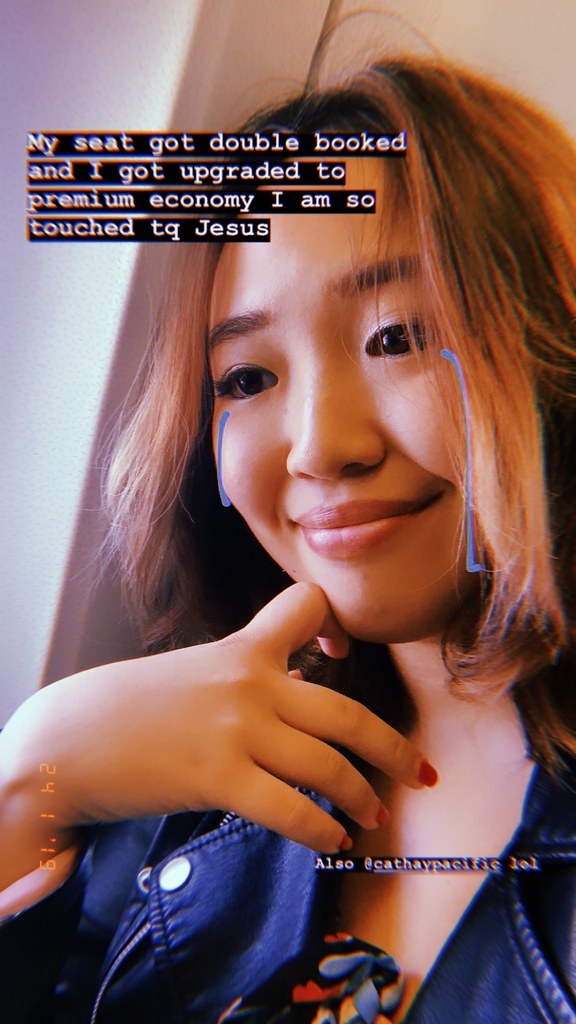 So I want to tell you guys about that time I got upgraded at the gate for a flight, which was approximately two hours ago. I always find that I feel the immense need to write about my air journeys and possibly it’s because of the bubbly solitude of flights that creates more space in my head to fill with thoughts and random observations which sometimes includes the throwaway musing that actually i am the most talkative person in the world, except usually 90% of it sits in my cranium and doesn’t leak down to my mouth. And that was a thought that also occured to me today as I was sipping on my house red wine in premium economy which was chilled although red wine shouldn’t really be chilled, but which was very sweet anyway because it had been enhanced with the delicious knowledge that it was premium economy wine which i had done absolutely nothing to deserve but was being given anyway.

But I’m getting ahead of myself. I was walking to the gate in a sort of grumpy mood because our flight had been delayed and the grumpiness was equal parts because it had been delayed and because i was not surprised that it had. Indeed, I have taken more delayed than undelayed flights on Cathay, for a Cathay flight to be delayed has become sort of routine. In fact, the last time I was in hong kong, the flight home was cancelled and it was because they had misplaced their aircraft and it never arrived. So I had to stay in the airport hotel unable to sleep because I was anxious about being bumped to the morning flight which of course led to me oversleeping and almost missing my morning flight. Also, when I was 18, I had taken a Cathay flight which had been delayed five hours because there had been a security threat on board and they had to get the police to come escort him off and this was right after I had seen a documentary on 911 so it was very dramatic and I was sure that would have been the end of me. Which it wasnt, but all this is to say that my impression of Cathay Pacific has been less than stellar.

I thought about whether to include that whole spiel as it seems ungrateful to rag on an airline that had upgraded (spoiler!) me to premium economy but then I thought, it’s all true what I feel about cathay and anyway even people can do both great and annoying things, what more airplane carriers. So they’d not be mutually exclusive. Anyway as I appraoched the gate and scanned my boarding pass, the machine emitted an alarming bleep and the stewardess took my passport and struck out my pass and gave me another one. And I couldnt help noticing that the new boarding pass she gave me had been pre printed already and was lying on the gate counter so this all seemed very premeditated.

why are you giving me a new pass? I asked her, and she was all like, so your seat has been changed. And this made me even grumpier because it seemed to me evidence of an overbooked flight, but then she raised her very perfectly manicured eyebrow and pointed at my new boarding pass which now said premium economy and suddenly all my grumpy feelings evaporated from my being and floated up to who knows where.

It seems prudent to contextualise my excitement: being randomly upgraded has always been one of my life dreams. People dream of buying cars and houses, but not I. I just want to be the subject of a random airline upgrade and also to watch Sierra Boggess and Ramin Karimloo do the live duet from The Point of No Return at least once in my lifetime. The second will never happen it seems, since Sierra has gone on to greater things, and who knows where Ramin is now, probably fronting Jesus Christ Superstar on some stage in Osaka. And the first has stubbornly refused to happen. Until now.

I have been upgraded once, just once before. This happened on ANA on the way back from Tokyo some years ago, where I’d been sent for work. My sister had come along with me on that trip, and the system hadn’t registered that we were passengers so it had given our seats away. The woman at the counter had looked very stressed about this and apologised so many times, she was the picture of Japanese Anxiety which if you’ve read Amelie Nothomb’s Fear and Trembling you’ll know exactly what I mean. Her anxiety was creating anxiety in me so to calm her down I pretended to be ~super calm~ and I said: please dont worry about it at all to which she said I’m SO SORRY and I said dont worry please and we seemed to be caught in this endless loop of mutual reassurance until she went aha! and put us on Premium Economy. And I was so excited I wanted to pee myself. She seemed really pleased to have found a solution too. In fact the only person who didn’t seem pleased was my sister who didnt understand how significant this was for me, to have been upgraded, even if it weren’t a random upgrade but rather, a sort of very luxurious apology for a minor inconveneince. She just went, so it’s like the same, but with bigger seats? which made me wonder seriously how we could have been related at all.

But no, this was my first time being truly randomly upgraded and I felt the very precient click of things falling into place and my life dreams being held gently and allowed to take flight. I got to my seat and there was so much space in it I could actually cross my legs and read my book quite comfortably. And of course, there was this wonderful sunset throwing golden dusty light into the cabin and it all seemed very cinematic and beautiful.

Because I was so excitable I spent a lot of time poking around which greatly annoyed the lady next to me who had obviously paid actual money to be there. I guess my behavior was what you’d associate with someone who’s soul truly belongs in Economy. I made my chair go up and down and messed with the drink holder and asked for blankets and water and looked through all the movie selections even though I dont watch movies on flights. I was a little bit too obvious staring at my row mate’s tv screen because she spent an hour watching the advertisement for the Hong Kong Airport over and over again!!!! Instead of an actual movie! Like, lady, you just came from the airport. It was alright. Wait till you see Changi Airport.

Perhaps the most amazing thing even to myself was what transpired when mealtime rolled around. For reasons like nausea and stuff I dont really eat on airplanes, I find it an awful experience. Firstly, motion sickness. Secondly, the food’s always very whatever. Thirdly, if you say yes to a meal, it stays in front of you for hours and they dont take back the tray for what feels like forever and you cant really do anything else with the space being occupied in front of you, not even get up and go to the toilet or reach for your bags, and all you can do is regret saying yes to the meal. But when the stewardess asked me about my meal choice I actually said, without hesitation, that yes I’d like the lobster sauce pasta please, which amazed even me.

It’s funny that they called it lobster sauce pasta because obviously there was nothing in there that was even pretending to be lobster meat, it was just pasta with prawns covered in lobster flavored sauce. But it was delicious. I was doing a lot of thinking while eating, I was thinking things like i cant believe im eating on a plane! and this stuff is delicious! and is this really delicious or am i just thinking it is because I am happy about being upgraded? And I also asked for a glass of red wine and felt very fancy about the whole thing. I finished the pasta even though I wasnt hungry, it felt only right. And then the stewardess gave me some strawberry ice cream and I was like do you have the adult flavors? and she looked at me and she was like, this is the adult flavor. Anyway it was very good. 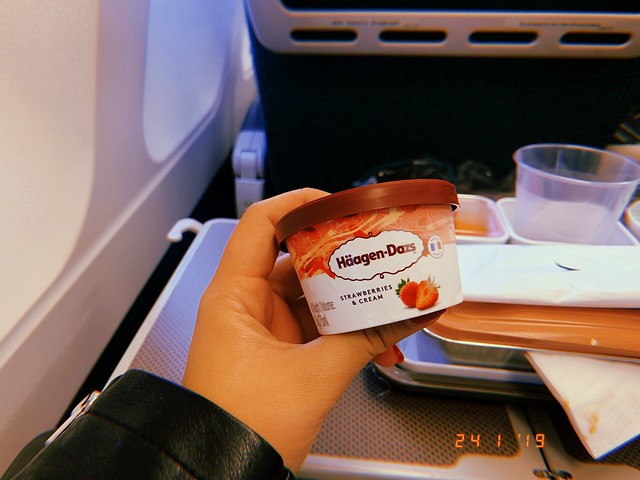 Good.
It was so good that as I was eating my meal one of the thoughts that flashed in my head was I should write all these things down before I forget so once they took my tray away I got my laptop out and started tap tap tapping away. So in the present, the present of writing this post, I am actually still in the air, hovering somewhere above Indonesia or Malaysia. I’ve probably ruined dinner for myself but I feel no regret whatsoever. In fact, I think I may have another glass of red. This entire business of sitting in 32A when I belonged in 42C has greatly improved my outlook on the airline, even though (or perhaps especially because) it happened so randomly, with no expectations, no obligations, and probably occured due to a mistake on someone’s part when doling out seat allocations behind a computer screen. And yet it has revealed so much not just about the airline, but about me, to myself. More and more thoughts are bubbling in the forefront of my mind, about the lady next to me, the seat recline, the ingredients in that overwhelmingly orange lobster sauce. But the loudest one is this: how amenable I am, how easily I sway once shown the tiniest bit of kindness. I am perhaps not as firmly rooted in my opinions as I assumed I was before.