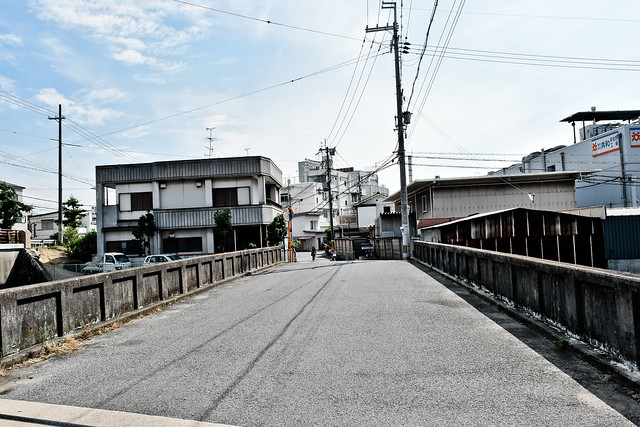 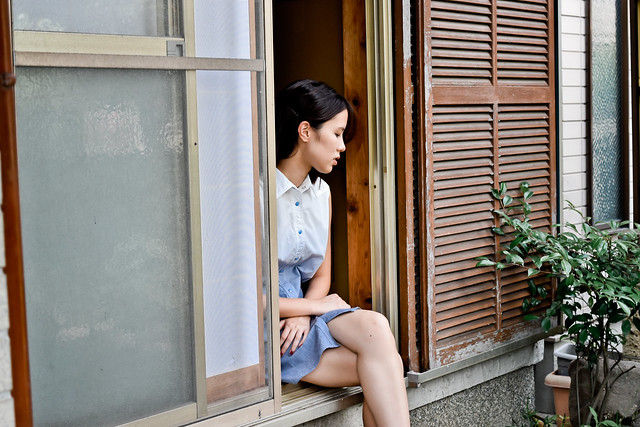 Osaka, Japan.
airbnb.com/jemma
All photos taken with the Nikon D5500
The stuff my childhood was made of: Spirited Away, Howl’s Moving Castle, Laputa, My Neighbour Totoro, and so on.. there’s something about Studio Ghibli’s charm that endured all the way through till adulthood. A friend of mine wrote her thesis on how Miyazaki specialises in creating fairytales for adults, so maybe there’s something to that. Still, I’m getting carried away..

We spent one night in Osaka of transitory nature, an in-between night after the bulk of our Japan trip was done. Post Kyoto, one night in Osaka while preparing for our early morning flight out of Osaka’s Kansai International Airport. And one night out of the city centre, where living in a Miyazakian creation was suddenly and completely possible. We booked a huge traditional Japanese mansion in the outskirts near the airport on airbnb for a fraction of the price it would have been in the city centre. Just for scale – it was about $65 for a huge house catered for eleven people – and there were only three of us. Not the kind of place you would book for the entirety of your trip (the journey to the city centre would have been about half an hour each day), but the kind of place you stay in for experience’s sake. To be honest, I dont think we were expecting much of the place given that it was more of a stopover night for us, but once again Japan turned around and surprised us, as it does.

Where do we begin? Firstly, the mansion was situated in a quiet suburb, the kind of place you imagine families reside away from the dust and noise of traffic and towns. Walking to our place, we barely saw anyone, and then out of nowhere, like in a pop up book, a bright and completely random soft serve stand: 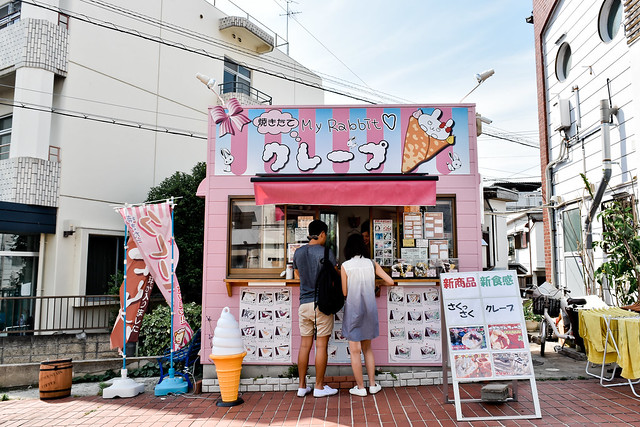 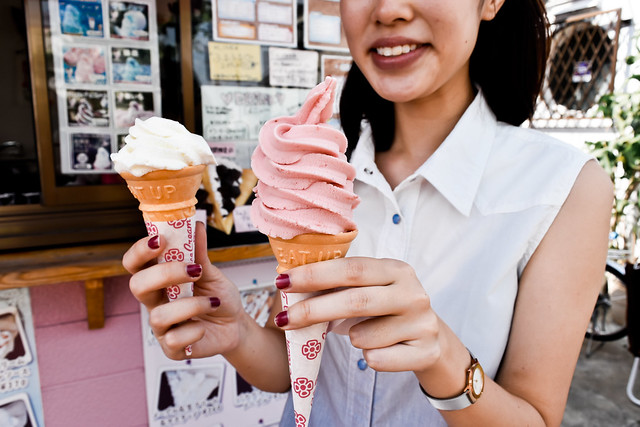 Of course we bought our strawberry soft serve cones. I dont think anyone could pass by the ice cream stand and not buy anything – and we were as interesting to them as they were to us, the schoolgirls manning the booth got incredibly excited when they heard that we were from Singapore and demanded a selfie. I know – what? Already the place was starting to take on a dreamy sort of quality, the type of haze you get while watching a Ghibli film roll on..

We turned in after the soft serve stand and crossed a bridge where a dozen little turtles were sunbathing. When we got excited and started calling out to each other to point out the turtles, the tiny fellas rolled over and dropped into the stream as though they couldnt be bothered with us humans and our disruptive noises. I think that was it, really, the entire time we were in the suburbs I felt as though we were just visitors to a sleepy little set that couldnt be bothered with our existence. It was pleasantly calming. 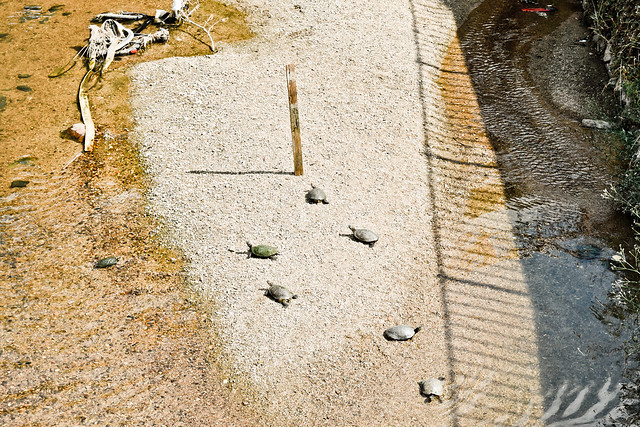 The turtles came back after an hour or so..
We reached our mansion soon enough. When I say mansion, I do mean: 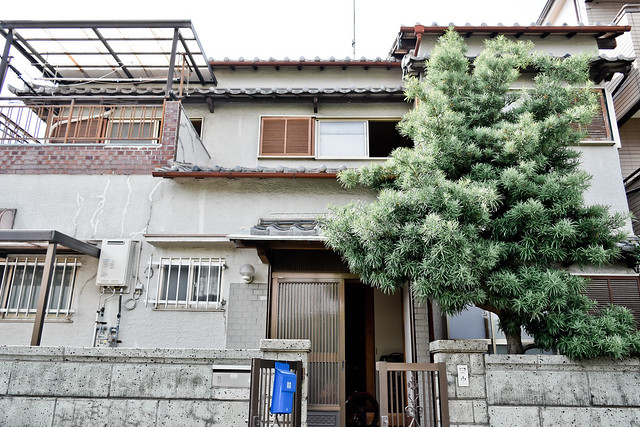 The place was huge – it must have had seven different rooms across two floors. It was the kind of house you see in scenes right out of My Neighbour Totoro, with animated children running across the house scattering giggling dust bunnies everywhere. In other words: I loved it.

When we reached, our host was happily hacking away at a tree growing out of the garden. “It’s out of order,” he explained cheerfully, then let us in the door while hacking at more branches. “I’ll be done in half an hour, then I’ll be on my way. Just close the door behind you when you want to check out tomorrow.”

He looked confused for a moment, then shrugged. “You can leave the key in the mailbox if it makes you feel better.” Obviously neighbourhood safety wasn’t a major concern in these parts. I shook my city-bred head and tried to get used to the confidence of sleepy towns. 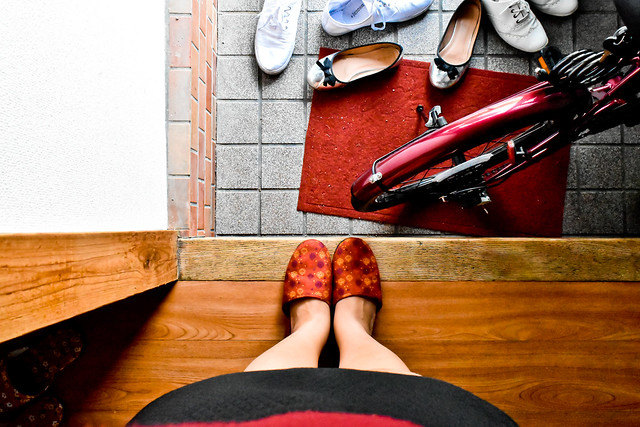 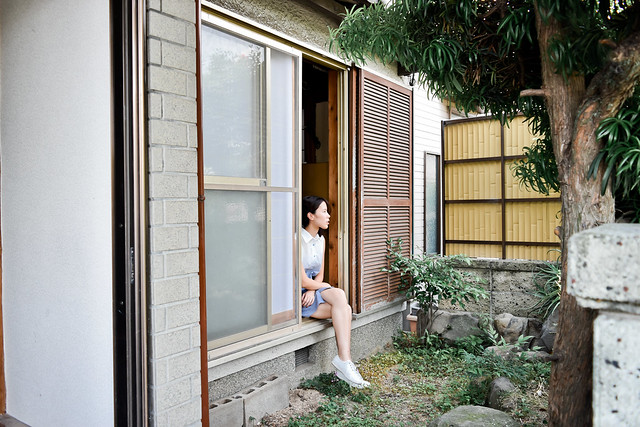 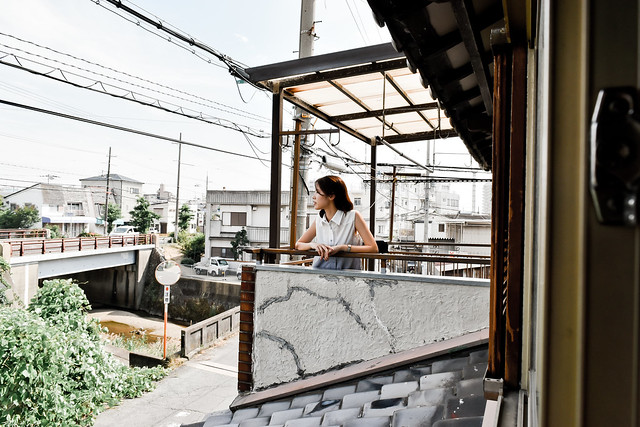 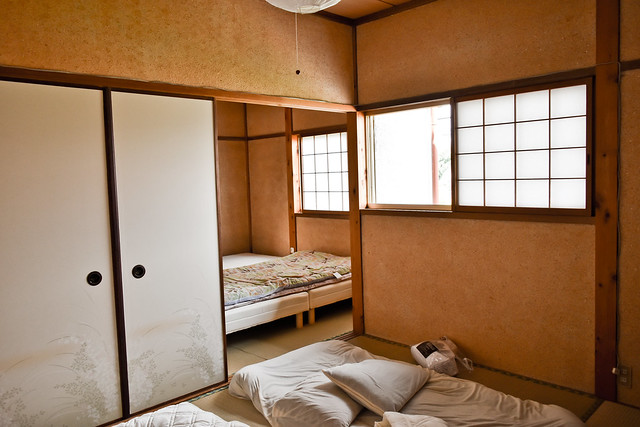 It was like nothing I’d ever experienced. Even when staying in quiet towns across New Zealand, I’d never been afforded access to such a luxurious expanse of space. I think it might even have been a bit of a waste, having just the three of us stay – we barely touched the second floor. And so traditional! Before, we’d lived in snatches of tradition in rectangular apartments atop the city centre. But here, this was the real deal.

There wasn’t much to do in the suburbs, and even the train station seemed like a bit of an afterthought. However, when booking the place, we did some preliminary online scouting and realised that it was barely a couple of train stops away from the Rinku Outlet Village, which was right in between our apartment and the airport, so after checking in comfortably, we headed off to take a train to the outlet village. 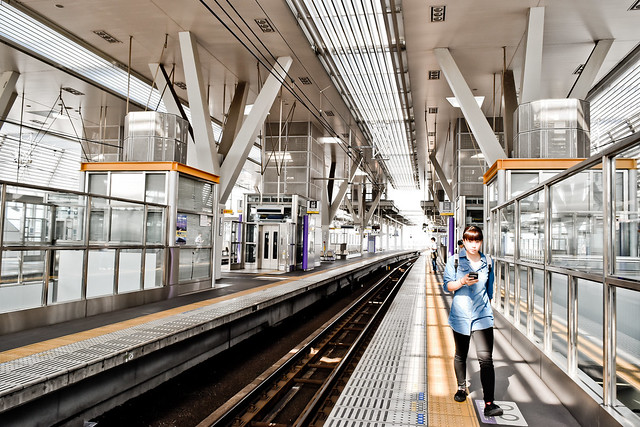 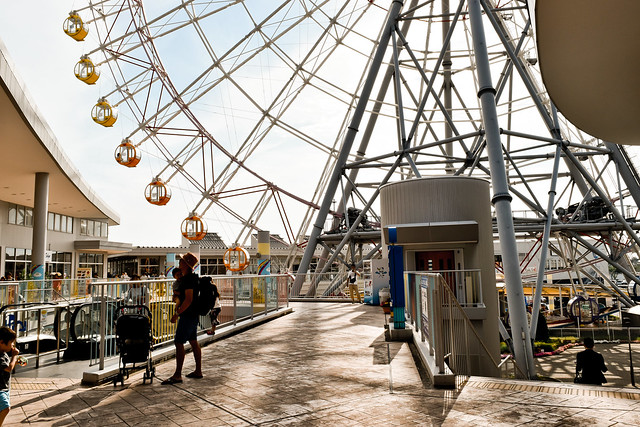 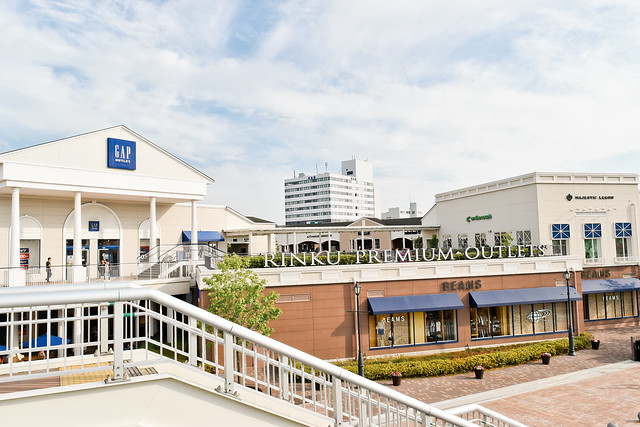 Now, I’ve been to outlet villages all over the world, so I think I’m more or less qualified to say that the Japanese, once again, have taken this as a sort of challenge to out-awesome all the other outlet villages in the world. Most outlet villages just consist a huge compound or space with “houses” playing store to different brands. The Rinku Outlet Village in Osaka had electronic children playpens, giant food compounds, a ferris wheel, and yes – a village of outlet stores. It was insane. 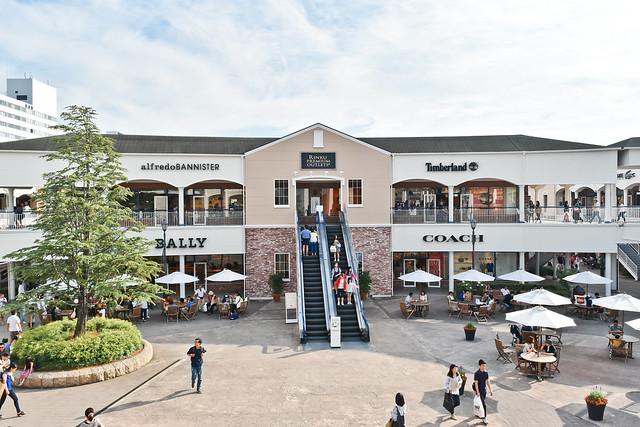 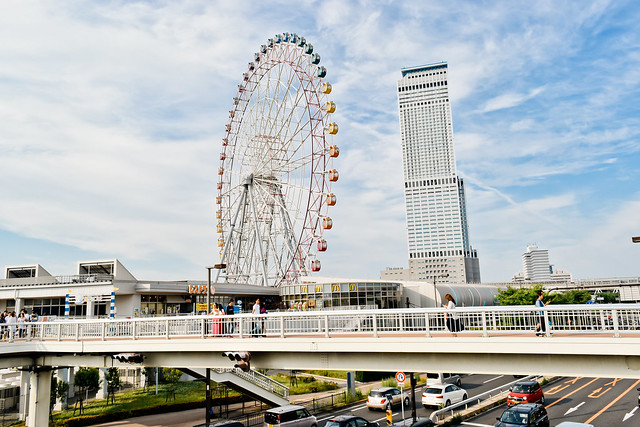 Why do you need a ferris wheel in an outlet shopping mall?!? Beats me.
It seems like they took the idea of a village to mean family amusement park. And the best things is, the place was huge and accessible. I dont mean location wise, though it’s relatively easy to get to by train. I mean in terms of purchasing power. I dont usually enjoy outlet shopping because I’m not crazy into luxury items, and discounted luxury goods is basically still a really expensive bag that makes no sense to me. At the Rinku outlet village, though…

I dont even think I’ve ever bought so many things at an outlet compound before. There’s a huge GU there, which is basically the Japanese version of H&M on a budget. Quality of the clothes are great, the styles are timeless, and the clothes are – lets face it – unreasonably cheap for what you get. The other outlet stores go beyond the ordinary chain brands and include plenty of Japanese designers, which Candice loved. And if you got tired of shopping, the food options were so much better than any other outlet compounds I’ve been to: the queue for Godiva snacks snaked round and round. 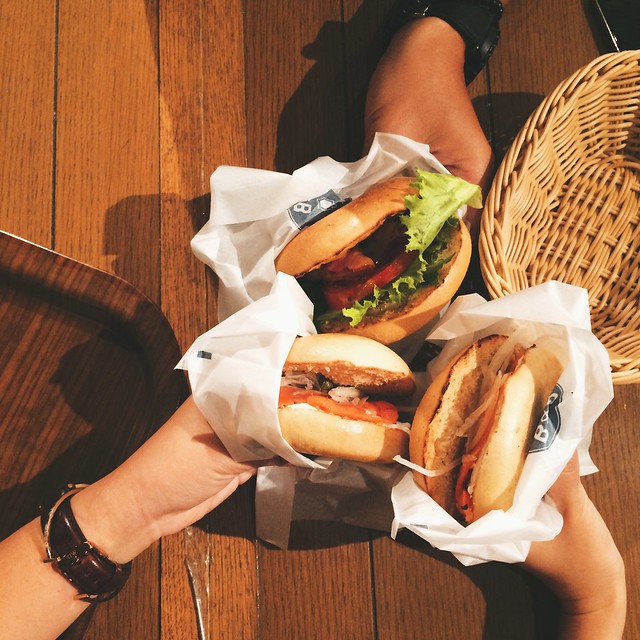 Us though, we went for Bagel & Bagel, a chain bagel eatery in Japan serving INCREDIBLE burger style bagels. The cream cheese used in the bagels.. were something else. 100% recommended.

We stayed all the way till nightfall. Rinku is situated at the edge of Osaka, I think, so if you walk all the way to the end of the shops and lean over the railing you can see the sun setting slowly over the sea. While waiting for Edwin to buy up his sports gear, I settled against a railing and watched. A few more stragglers wandered over. In the end, about fifteen of us stood there, watching the sun spill over the sea in slow motion. And you know what the incredible thing was? Not one of us took out a smartphone or camera to snap a picture. 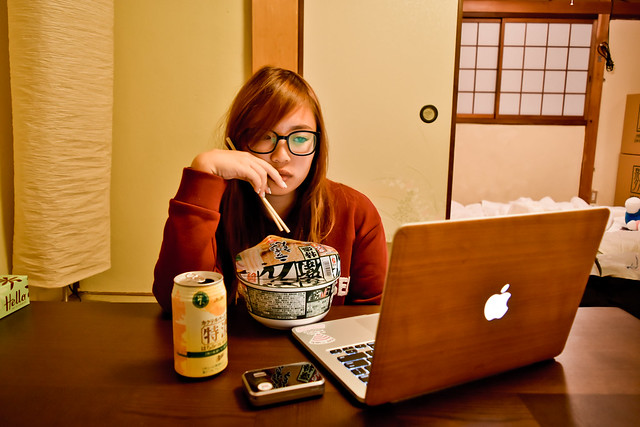 At the end of the day there we were, back in our apartment, having our last bowl of Japanese instant noodles and partaking in our last cans of shared fizzy beers. As most trips conclude, there’s always a lingering vibe reeking the absence of closure, last gasps of a country lamenting not enough time spent there. This time, however, we eased into our leaving through our transitory night in the Osaka outskirts. A bittersweet sense pervaded the house – but it was time to go home, and we were ready.

All apartments on this trip and more available at airbnb.com/jemma
x
♥jem