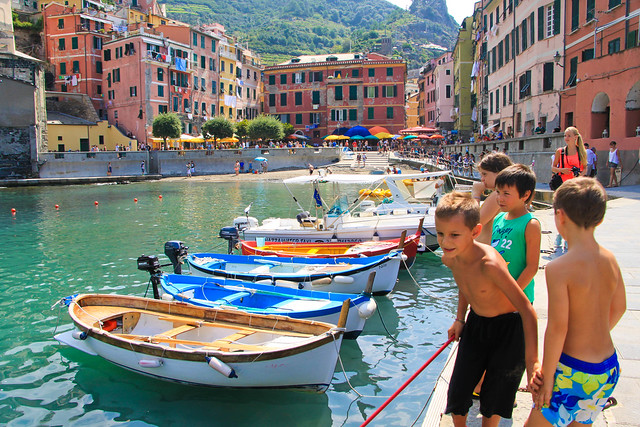 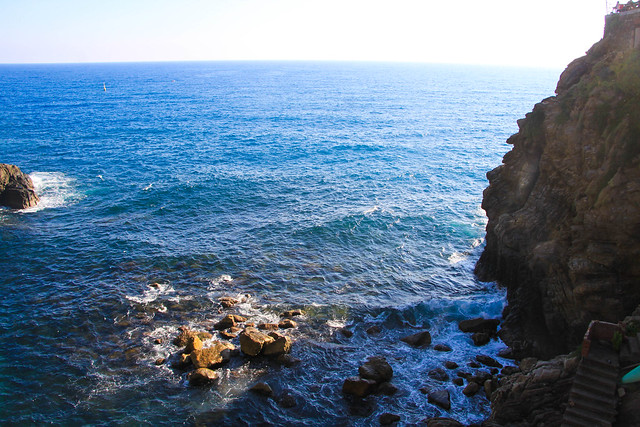 Cinque Terre, Italy.
Finally – my last post on Cinque Terre, the third and final one wrapping up the hot and colourful tourist trap that had us so besotted. Take a minute to read part one and two if you haven’t, but otherwise, here we go: Vernazza and Monterosso, Cinque Terre!

First up, Vernazza. Vernazza is the fourth town in the quintet along the Cinque Terre Train Line, and the only one with a natural harbour. Boats are tied to the sidewalk, bobbing along the water in a cheerful Venetian style, and the town melts straight into the sea. All of Cinque Terre’s towns thread the same theme – colourful, vibrant houses, bustling italian life, and a strange slash deliberate aversion to motorised vehicles, lending it a quaint sort of vibe. They all incorporate the sea in some way or other – it seems to me that Europeans, Italians in particular, are drawn to water. You’d think that these shared qualities make the towns indistinguishable from one another, but that’s not the case: I found myself liking Manarola the best, followed by our star of the day, Vernazza. 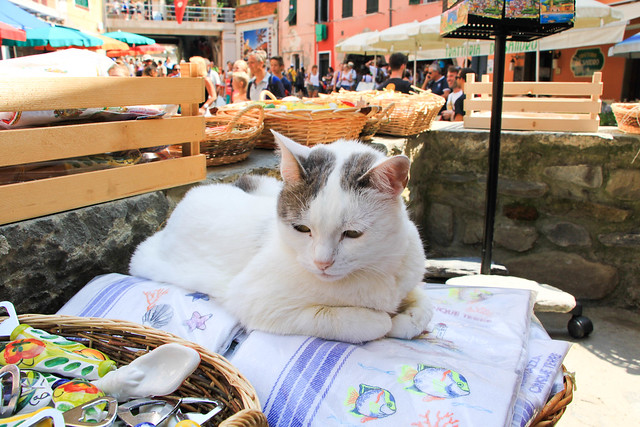 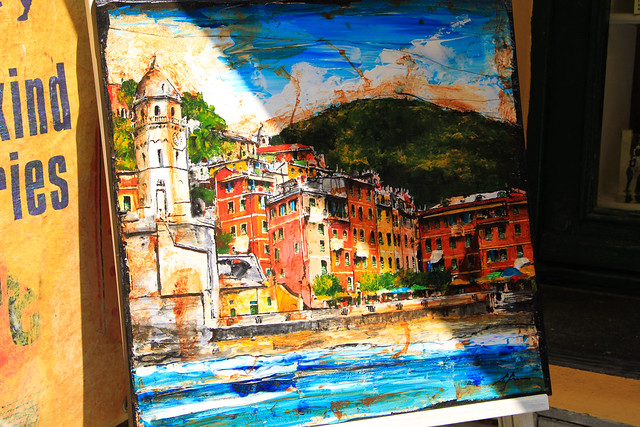 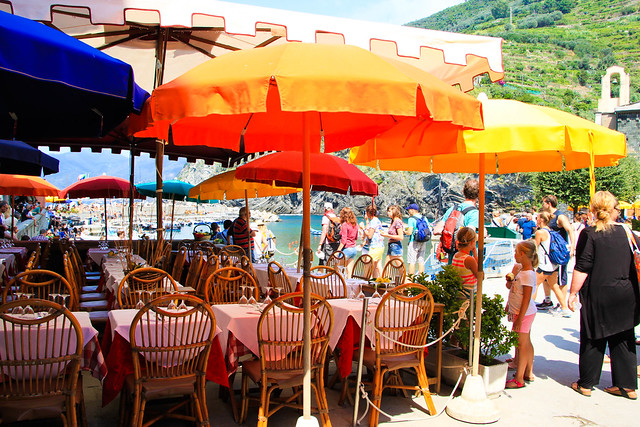 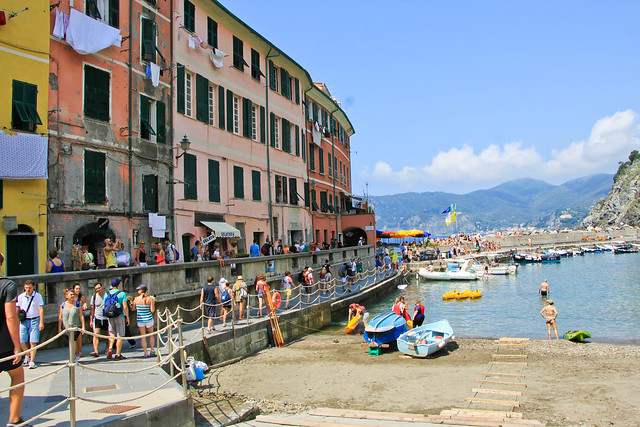 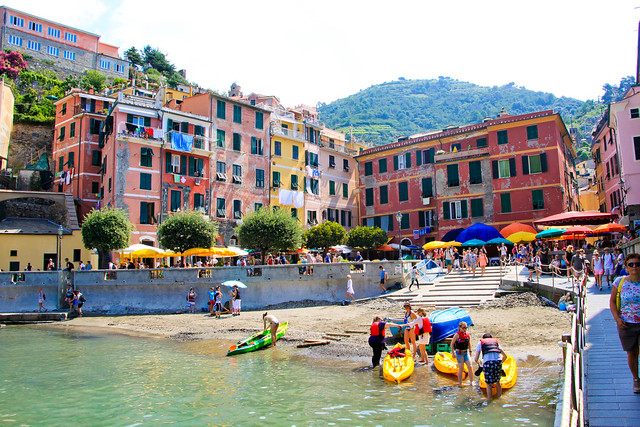 The Italian way of life can really drive you crazy if you’re the Type A sort who needs everything in order and accordance to a plan. But even though I’m mildly compulsive-obsessive at the best of times, I found myself unwinding slowly in Italy, and learning to go with the flow. We alighted in Vernazza with a throng of tourists and pushed our way to the main road, where the human traffic eased a little. One thing you realise in Cinque Terre – you tend to just make your way from wherever you are to the water, and when you reach the sea you feel something click into place: here we are.

We naively planned our day in the way that would land us in Vernazza around lunchtime, thinking that we’d just scope the place and flounce into any restaurant that looked nice. Once there, I ran a check on foursquare (again) and found that the top restaurant in Vernazza then was a clifftop restaurant called Belforte, right by the water. Perfection! We walked in and requested a table. They stared at us, possibly holding in their laughter.

Turns out it was pre-booked a month in advance – you need reservations if you want to get in on the best of everything in Italy. The boyfriend and I exchanged a glance: we had no reservations, and we were leaving Cinque Terre… tomorrow. Some of it must have shown on our faces, because the laughing chefs told us to speak to the owner, a woman with folded arms and ferocious hair, stationed by the entrance of the restaurant.

“The restaurant opens at one for lunch,” she said as we approached her, probably assuming we had a reservation and like the annoying tourists we were, wanted to eat now.

“No, we don’t have a reservation.. but we heard this was the best place in Vernazza and we leave tomorrow and it’s our first time in Cinque Terre and..”

She walked away from us, evidently having heard enough of our wheedling. We shrugged: at least we tried.

“Anchovy basket?” I asked, thinking of the cheap fast food we’d seen on the streets of Riomaggore.

But before he could reply, the owner walked back out.

“In,” she said, “they’ll show you to a table. But you have to finish eating by one, when our restaurant opens. Si?”

Thus began our second most impressive meal in Cinque Terre, the first being Billy’s back in Manarola.

Have you ever had an entire restaurant cordoned off for your good self to dine in private? Neither have I. The chefs, still amused by the naive tourists who tried wandering in without a reservation, sauntered out to read us the menu and to show us basically what we would be eating… live. 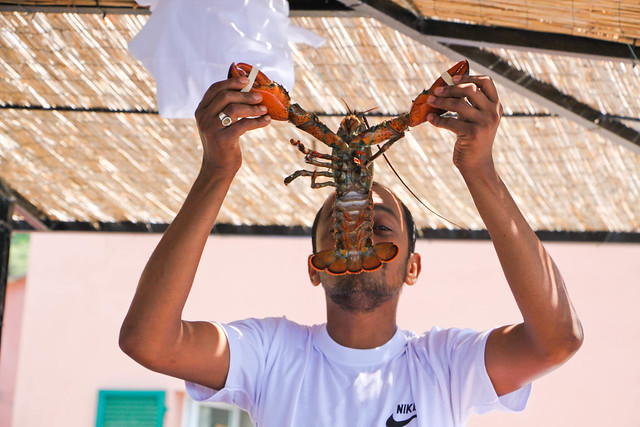 It felt like they’d decided to spontaneously accept us as one of them – the entire meal, they were jokey, casual, intimate, and I couldnt shake the feeling of fondness that emanated from them, smiling at two lovebirds dining alone, speechless at the entire situation. We couldnt understand much from them beyond the English-translated menu, but I felt connected to them. Does that make sense? No? That’s okay.. 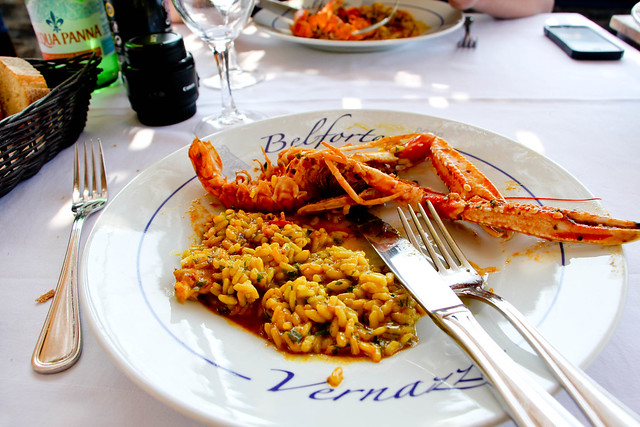 Thanks to the amazing foursquare (I know it sounds like it, but I swear I’m not affiliated to foursquare, I just use it a lot lol), we had their recommended dish, the Lobster Risotto. I still dream about it till this day. Sometimes, when we’re just bored and doing nothing, I ask the boyfriend – Remember that Risotto we had in Vernazza? And we both sigh happily, content to let it occupy our minds. 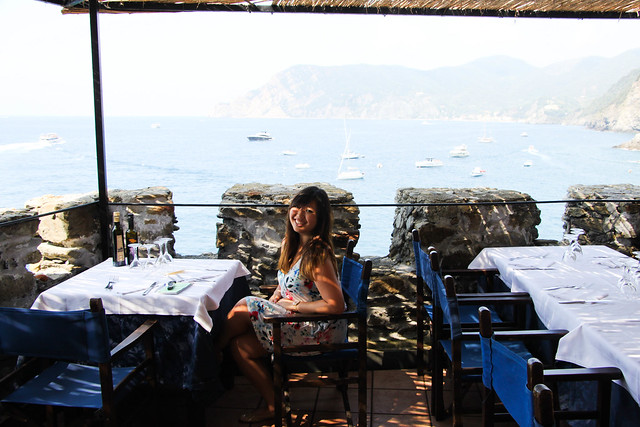 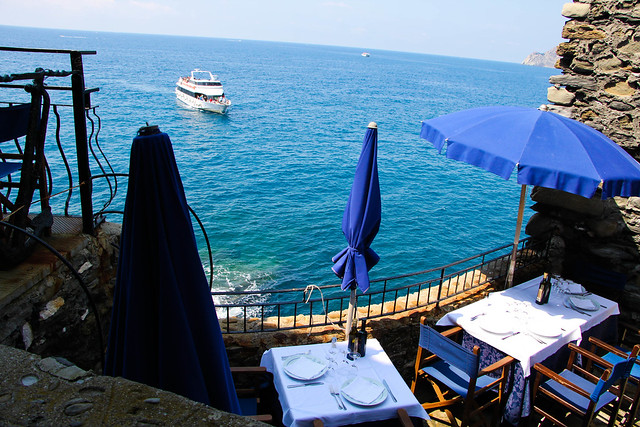 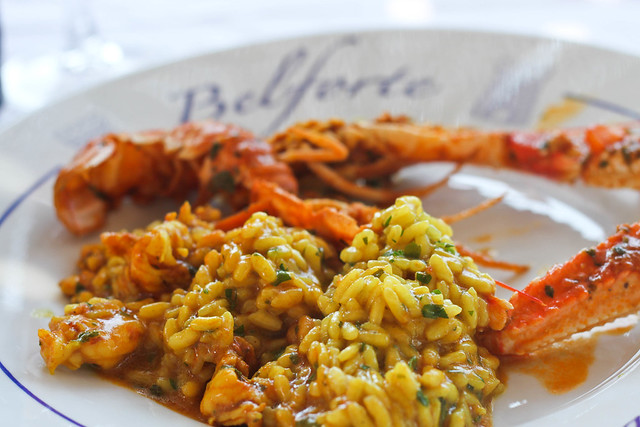 And the setting! If only we had natural rock formations you could carve restaurants out of back home, hanging over the sea to allow alfresco dining to the drifting sounds of waves crashing. I feel like behind every great meal is the careful curation of setting, the implicit understanding that a meal is very much an experience over just an exercise in swallowing. It’s a lot easier to get right in the romantic city of Cinque Terre, but still, Belforte had it hands down.

We ate leisurely enough and left at one as promised: it’s easy to finish your meal fast when you’re the only table the kitchen is cooking for. As we left, we located the owner again and started thanking her profusely, but she waved us away and smiled indulgently. Enjoy Italy, she shrugged, by now a familiar chorus to us. It seems that’s all the Italians wanted us to do: enjoy Italy. Generously.

After lunch, we floated around Vernazza for awhile longer, popping by the little stores and smiling at the newly arrived lunch crowds, sated. I think this will always be Vernazza to me: a lazy, beautiful town that winked at us when no one was looking. 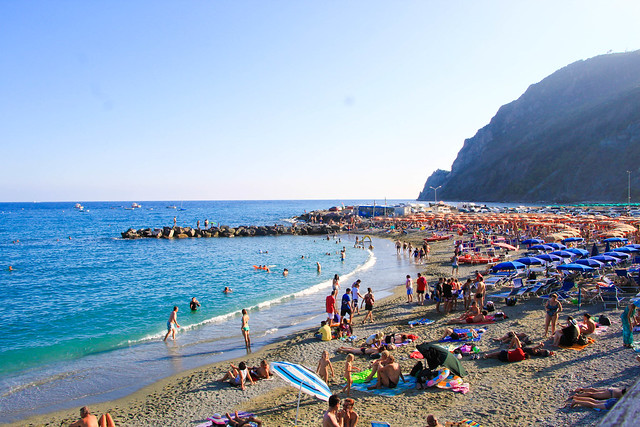 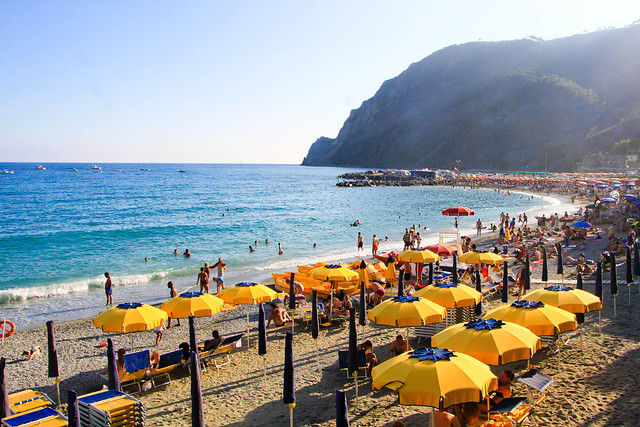 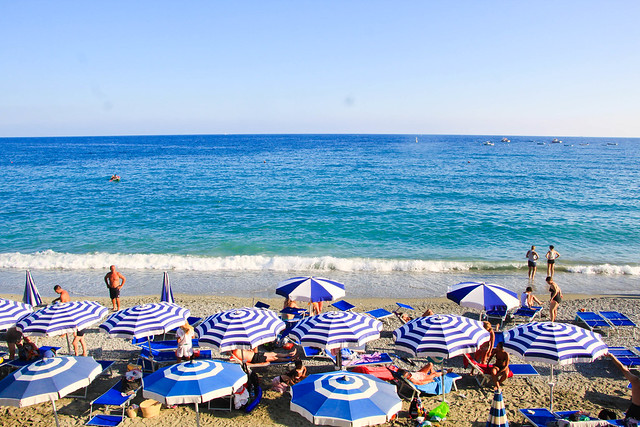 Wit that, we headed to Monterosso. Of the five towns, Monterosso is probably the least like Cinque Terre – I felt like we were playing a game of spot the odd one out. The colour clusters in Monterosso came mainly from its beach umbrellas: it’s a town dedicated to the beach, the entire thing running parallel to a giant stretch of umbrella-ed sand.

It was a hit with many of the tourists – you can tell by the sheer number of occupied beach umbrellas – but it wasn’t for me. It was too crowded, too obviously geared towards the commercial, and I’d come to Cinque Terre to see other things anyway. If I’d wanted the beach I’d have returned to Barcelona. Such is the contrary nature of man – to begrudge a place if it’s not tourist-friendly enough, yet to develop aversion to it if it too obviously is. Well.

We left after the hour was up – the train arrived to take us back to our favourite town, Manarola, and we spent the rest of the day splashing around in the natural rock pools, screaming in half-fear as children flung themselves off cliffs into the water. After that, you already know how it goes – unwinding with a glass of red, lying on our backs on the rocks trying to dry off, watching the sun make it’s slow orange descent. Waiting for the stars to reemerge, then making the slow jaunt back to the apartment.

Cinque Terre in my heart is second only to Ponza, but nevertheless I adored it in the way you know you must when stepping off the train onto the colourful streets. Would I go back? Probably – to the three favourites, Manarola, Vernazza, Riomaggore. It’s funny how a place I couldnt even pronounce properly etched itself so deeply into my heart, but it did.

So, to wrap things up. Is Cinque Terre, proudly declared tourist trap of the world, spirit animal of instagrammers everywhere, and bucket list destination worth all the hype?

Yes. Yes it is. Unapologetically so.

Thank you for being so beautiful, Cinque Terre. I look forward to my next strawberry daiquiri over your breakwaters one day, hopefully sooner than later x