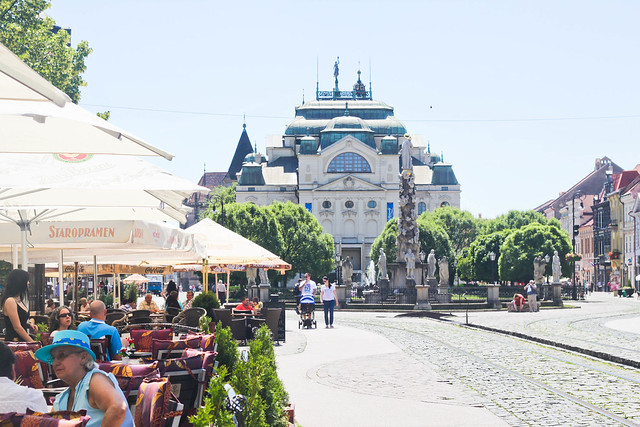 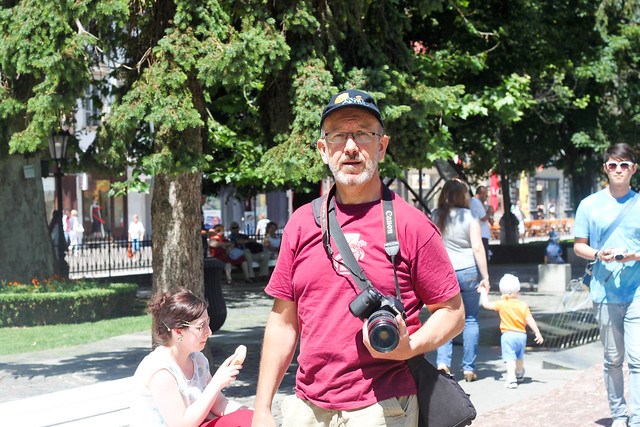 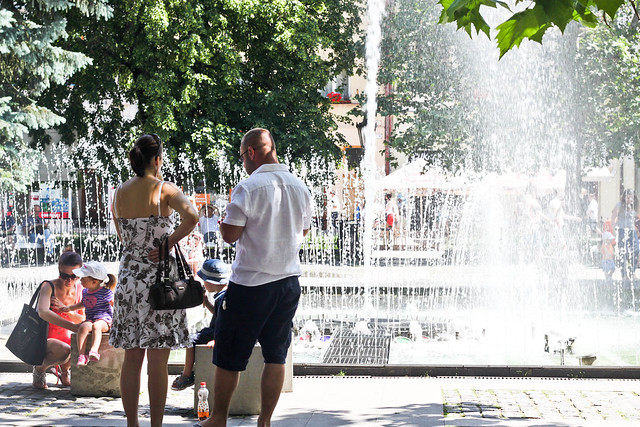 Košice, Slovakia.
*Giveaway: Read till the end of the post to find out how to win $100 shopping vouchers in exchange for sharing your unique travel stories and pictures with me!*

When one says Slovakia, you think Bratislava, and for good reason too. It’s the capital of Slovakia, tourist-friendly, pretty. Everyone who’s been there adores it. You have to go they say, it’s so charming. But charming isn’t what we’re after. We spun the globe and it landed on Slovakia’s second largest city: Košice.

I’ve blogged briefly about my three week duffel-packing trip through Easternish Europe: Praha, Košice, Budapest, Istanbul, Paris. The rationale we were operating on was alternating touristy / experience / touristy / experience centered destinations, and Slovakia was our second stop after the supremely touristy and beautiful Prague. We decided on Košice (pronounced: Koh-shit-zer) primarily because we wanted to see the famous Domica caves that trace the border of Slovakia and Hungary, and then decided to go all out and wing it, so I put in an open call for couchsurfing hosts in Košice while planning for the trip and within a couple of days Gejza sent me a message.

For those of you who aren’t familiar with couchsurfing, you can refer to my Broke Student’s Guide to Couchsurfing here. Although I’ve done it several times, it’s always an intensely different experience each time. My first time, the host in Salzburg told me we were going picnicking which in his books meant hiking up Mt Anif for a good few hours. In a dress. Couchsurfing is full of characters, is what I am saying. This time, Gezja offered us a place in his cabin in the woods outside the main city of Košice.

“It’s called Diana,” he explained, “and there’s no electricity or running water. But if you’re willing to rough it out, we’ll build fires, cook, and I’ll drive you to the caves.”

He seemed friendly enough, was extremely helpful in advising us on which train tickets would give us the best value, and I knew that getting to the caves which were really far out would be difficult on our own, so we shrugged and went for it. And I have to say – Thank God we did. On retrospect, this leg of our trip would have been impossible without a local to guide us, and Gezja was incredibly enthused to have us, which meant we did so much more than we possibly would have if we’d come the regular tourist hotel/tour way!

The first morning we trained in, we spent in the main city itself helping out at Gezja’s photography exhibition in the town square. 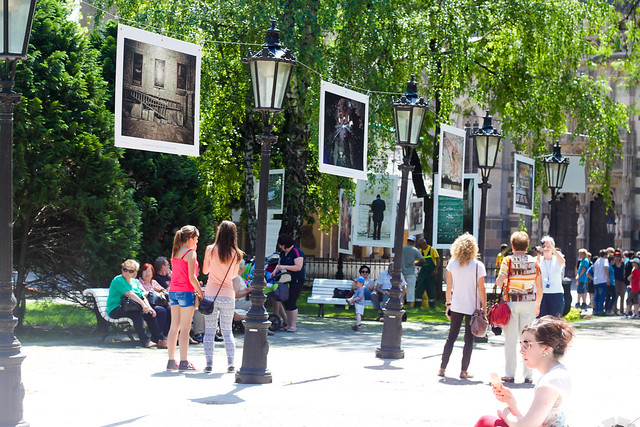 I know. How artsy. It turns out he was publishing a photography book in collaboration with a few other photographers and writers on the history of the city. It was insane. 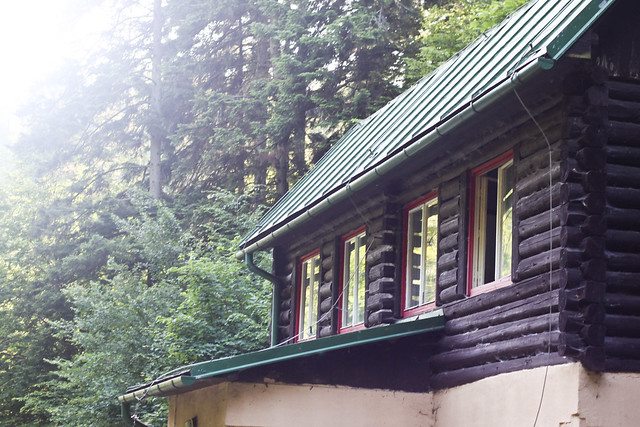 Cabin in the woods.

I think I didn’t really believe him when he said there was no electricity or running water till I reached the Diana. The entire place was pitch dark even in daylight – the first things we did were to open all the windows and light candles everywhere. Let me be frank: it was not luxurious. Our sleeping quarters were wooden bunk bed frames with sleeping bags flung over, and there was a consistent chilly draft running through the first floor that meant we could actually chill butter and sausages by leaving them out overnight. Gejza preempted us as much via our pre-trip chats, but even then he seemed a little embarrassed when we stepped in.

“It’s really old,” he started to say, but we quickly shook our heads. It had character. It was new (to me) and therefore exciting. And I loved it. 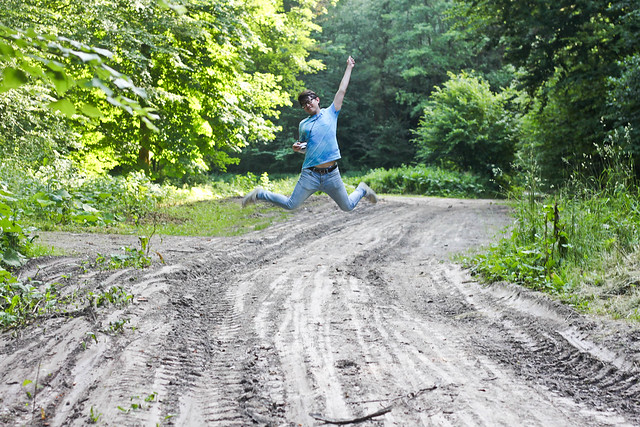 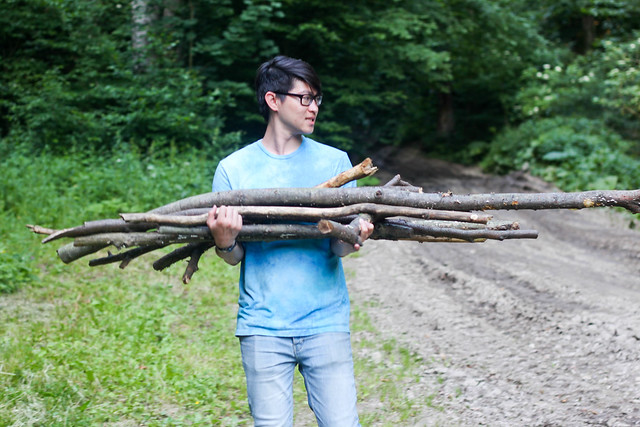 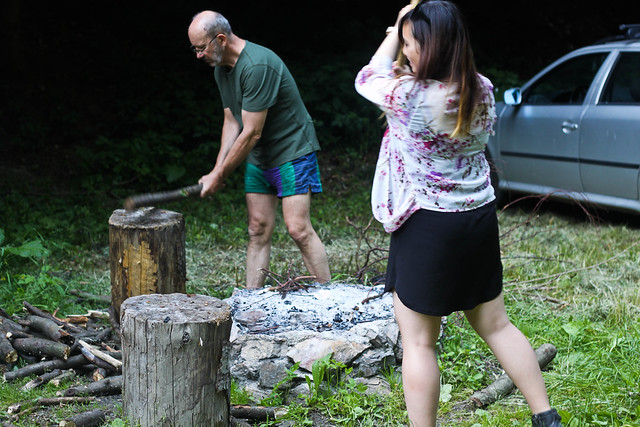 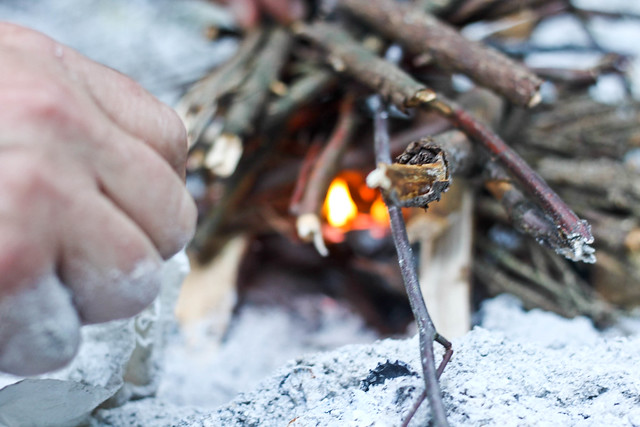 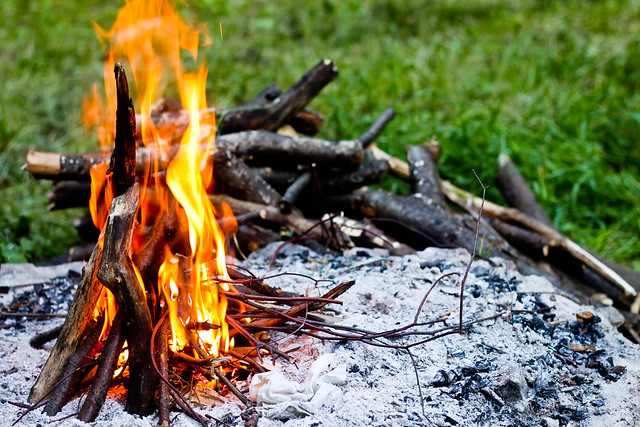 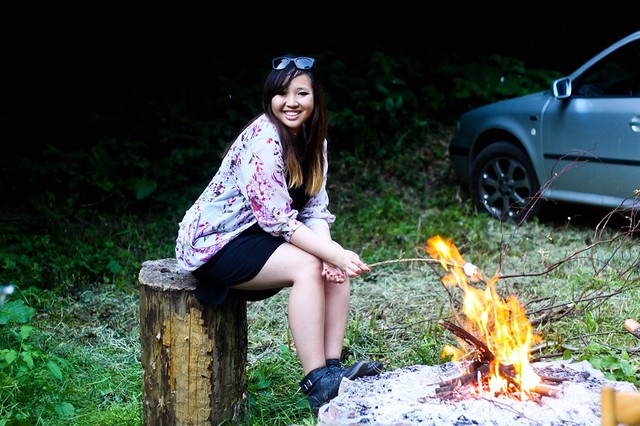 In this way the next few days passed. In the daytime we’d do something new – go caving, hiking, canoeing. In the evenings we’d gather and chop firewood, start a fire, and cook on the open flame while Gejza got out his guitar and settled back to tell us stories. 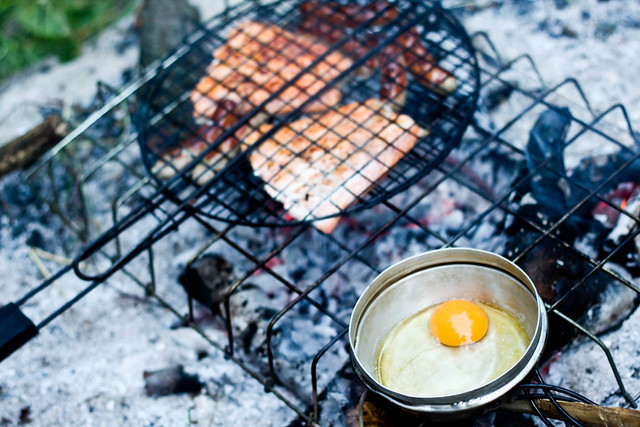 Trying to fry an egg in a tin cover

It was incredible. Gejza turned out to be obsessed with nature – he could pick out a berry from a bush and tell you if it was edible, in the mornings he handed us leaves that’d release mint when chewed on as a way of cleaning your teeth. He boiled tea from flowers he randomly plucked from the forest and could tell you if it was going to rain, or hail, just by sniffing the air. It was like living with Bear Grylls. And each night, when the sun started to set, we’d take turns to head to the stream and bathe in ice cold water. I did say – there was no running water in the cabin. I’m telling you, there is no experience quite like stripping naked and drenching yourself in ice cold water while hoping not to get stung by a water insect or cut by sharp leaves. It didn’t exactly help, but right before I went to bathe the first night I asked Gejza about the wildlife in the area and he cheerfully replied:

“Oh, there’s a family of wolves that live somewhere behind the cabin. But they’re shy, I shouldn’t think you’d get to see them.”

So make that an attempt to scrub yourself clean while naked, shivering, and harboring paranoid visions of exposing your bare bum to a hungry wolf. I didn’t actually see any while I was there, and I still can’t decide if that’s a pity or a blessing.

Guess what I did see though? 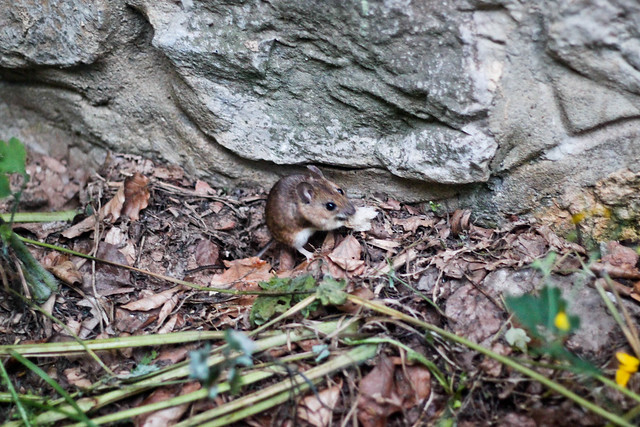 Mice. Oh, mice! Let me tell you about the mice. First – they were adorable. You just wanted to scoop them up and play with them. The first time I saw one I nearly expired in excitement. Second – they were everywhere, and they just wanted your food. We spent most of our time trying to save our food from being stolen the minute we cooked them off the fire. It was very infuriating because you’d be frustrated and trying hard not to laugh at the same time. 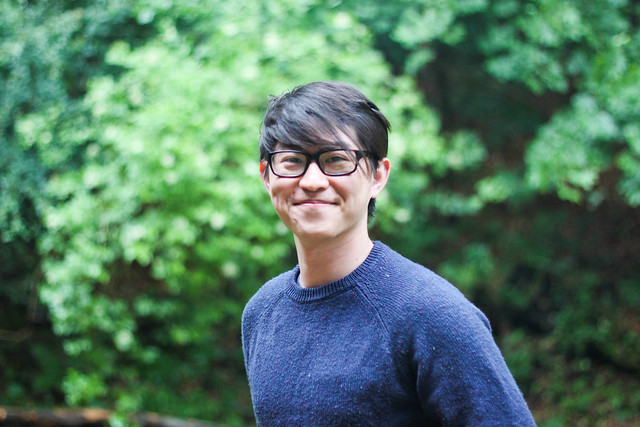 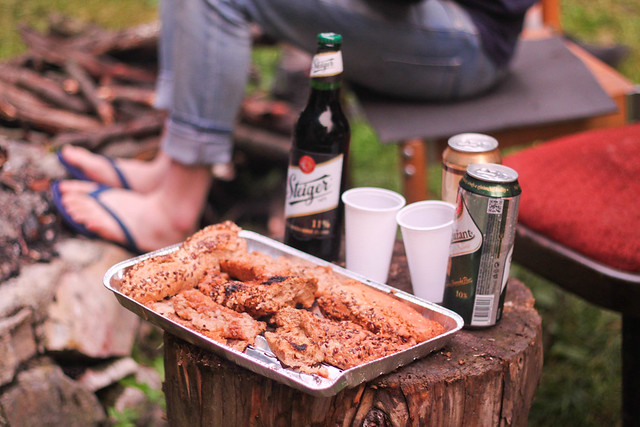 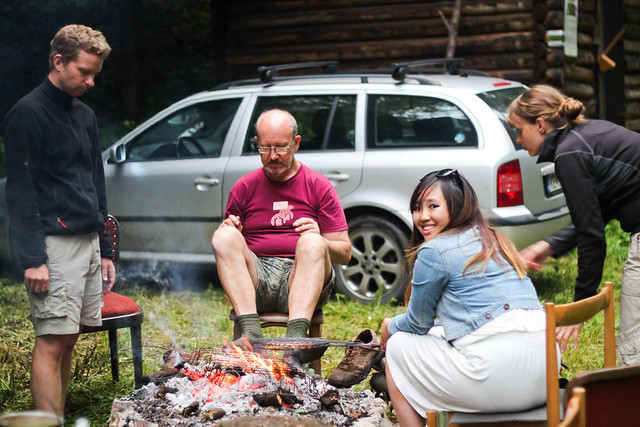 On some evenings, other couchsurfers would drop by and stay a night or just cook with us and swap stories. Pictured above are two Russian couchsurfers who sold everything and bought a rickety car they’re living out of right now. They started from Russia and were planning to end up in China. I have no idea if they finally made it but I hope so. 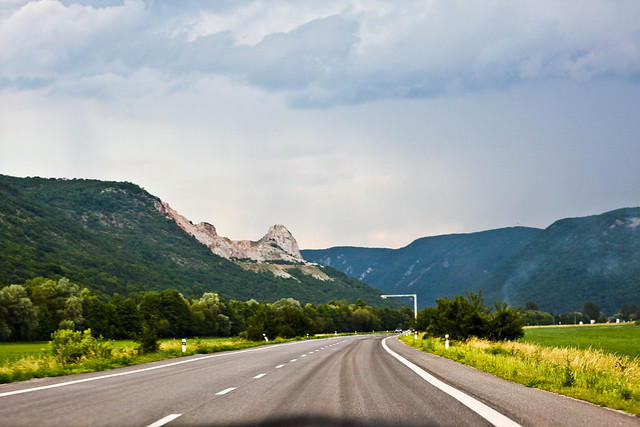 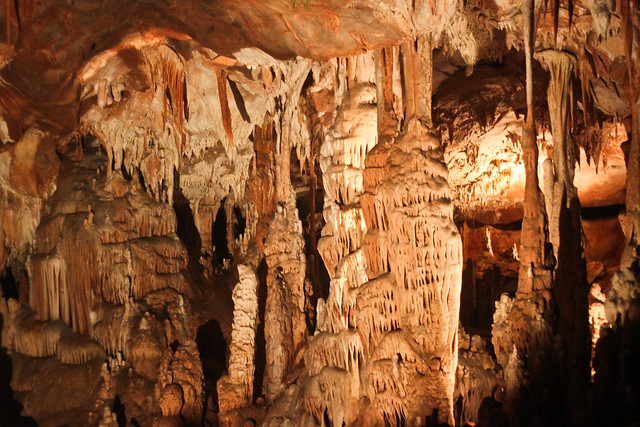 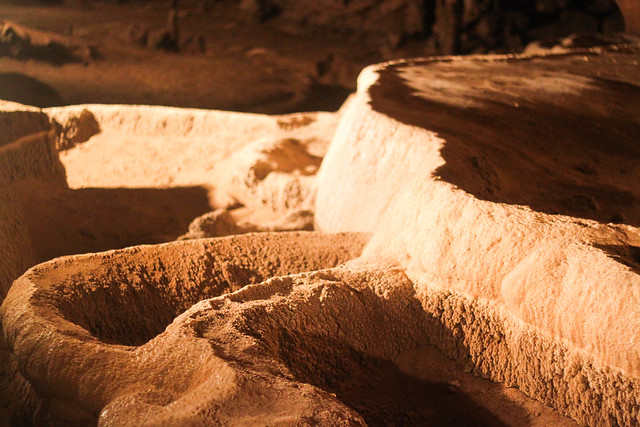 Of course, the whole reason we were in Slovakia was for the caves, though it was easy to forget that while getting caught up in the whole Girl vs Wild experience. The morning of Day Two (and when I say morning I mean day break, as in, 6am) Gejza drove us a good way out to the borders where we went caving. On our last day, Gejza proposed we hike up to castle ruins on a faraway mountain.

“It’s a three to four hour hike, but the view is great.”

My heart sank. The heat was still unforgiving, I had blisters everywhere, and after five months in Europe I’d had just about enough of castles and castle views, which despite what the locals tell you, I promise are all about the same. At the same time, I didn’t want to be rude to someone who had gone out of his way to be incredibly hospitable to us. Something must have shown on my face, because Gejza paused and said: 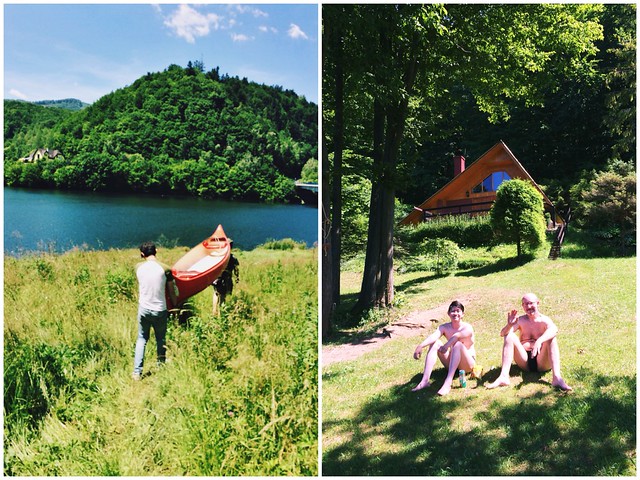 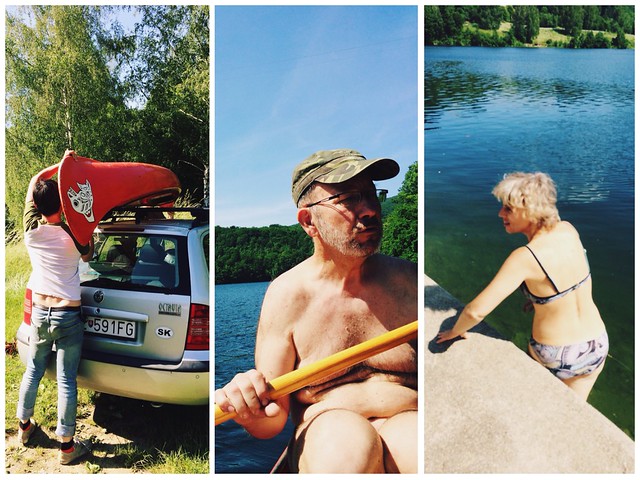 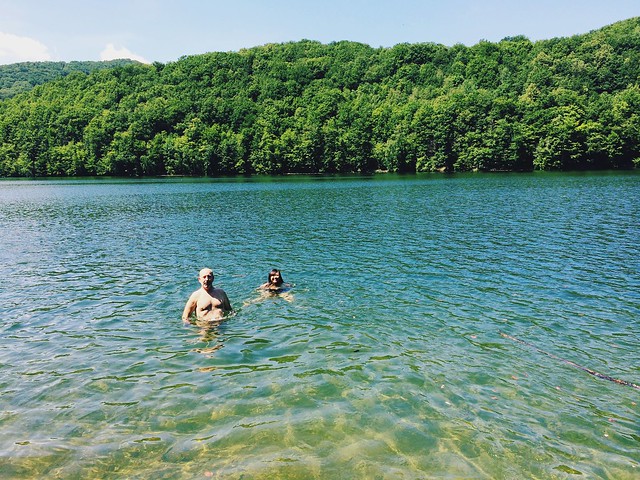 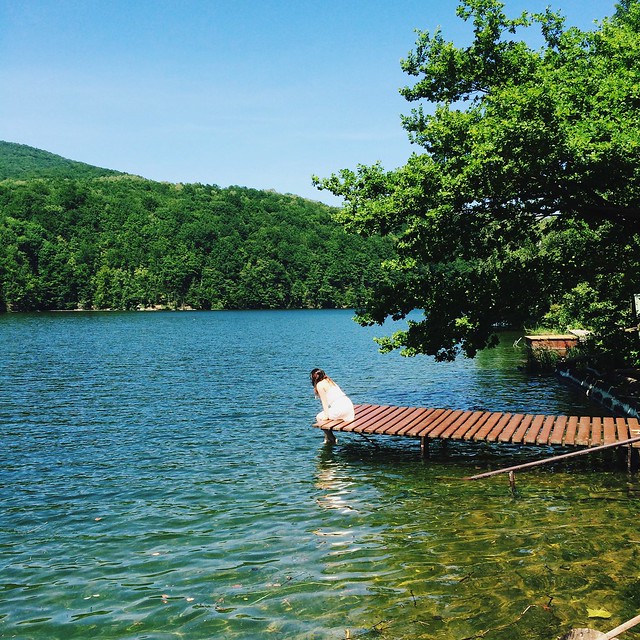 Photos taken on my phone because I didn’t want to risk bringing my DSLR down onto the canoe.

Plunging straight into the icy waters of the open Slovak lake while slow roasting in the heat, I thought to myself this would have been impossible if we’d just booked a hotel and trip advisor-ed our way around like we usually did. I’m not going to pretend that I’ll camp my way through countries from now on – I’ve never had a shower so sweet as the heated power jet of water the first bath I took in Budapest – but I can safely say that it was one of the most memorable experiences I’ve had.. ever. On our last day, Gejza drove us to the train station at 5am to catch our train to Hungary and gave us a hug before leaving – pressed up against the train window I thought it’d be the last I heard of him, given how he takes in couchsurfers so regularly we mustn’t have stood out particularly from his last or next. However, a couple of days later I got a couchsurfing notification that he’d left a message on my profile:

From Gejza RNDR.Legen
Kosice, Slovakia
Jem and Shane arrived to explore the wild east, hopefully they found it :)) They survived without complain the lack of shower in the forest and enjoyed all attractions offered, besides that they are talented singers of difficult songs :)), after 3 days spent together I can easily call them friends

And I thought to myself: friends. I don’t know if I’ll ever return to Slovakia or see Gejza again, but it was an incredible experience and I left with both a major case of de-princessifying and great memories of how hospitable and kind complete strangers can be. Many people have been to Slovakia, but an experience like this? Priceless. 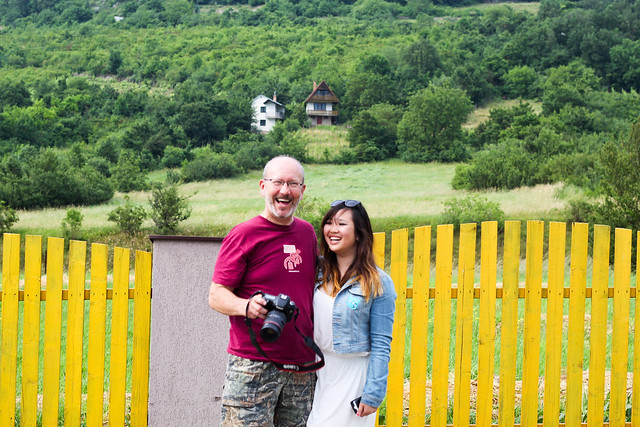 So, that’s my story. Now let me hear yours. When I told the Travel Made Different team from NTUC Income about the story of my Slovakian adventure, they got super excited. No hot water? Really? And – building a fire? Have you done it before? No? That’s… Amazing. The thing is, quite often, you’ll come across special moments that are out of the ordinary while you’re travelling. And it’s moments like these that make your experiences uniquely different from everyone else’s.

We were talking about the idea of travel’s relativity and the way individuals interact with different places to create a completely unique travel experience from the next person’s. Having traveled quite a bit over the past year, I’ve always tried to live like a local (successfully or unsuccessfully, only time will tell) and not like a tourist, and I think Slovakia was as close as I came. But it doesn’t matter where your travels have taken you, everyone has their fair share of travel stories to tell. Last week I watched one of my friends plunge off an insane cliff in South Africa via insta-video. The same week, another friend posted a selfie in Rome. First solo trip.. ever! the caption read, and I think to myself, traveling solo? That’s a story to tell, right there.

Whatever it is, the Travel Made Different team wants to collate stories – see Instagram-worthy shots of all these unforgettable travel experiences – and they’re now running a campaign to incentivize everyone to story swap. Share with them what made your holidays different and they’ll reward you for it – with $4000 worth of shopping vouchers in total to be won.

From now till 31st December 2014, they’ll be giving away $100 shopping vouchers to 40 @TravelMadeDifferent followers with amazing ‘Same Same But Different’ (or #SSBD, as we like to call it) travel experiences, so submit your entry now – details as follows:

Contest ends 31st December 2014, so make sure you send in your entries before then!

I’ve already shared my story with you. Now it’s your turn to talk. I’ll be personally involved in picking winners as well, so I do want to hear all about your travel experiences and stories!

And with that – go forth and travel. There never has been a better time to quote Wilderness Explorer Russell, but:

ADVENTURE IS OUT THERE.
(caw, caw, caw!)