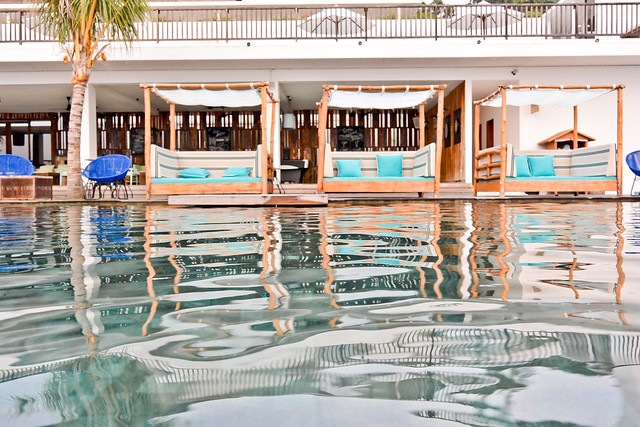 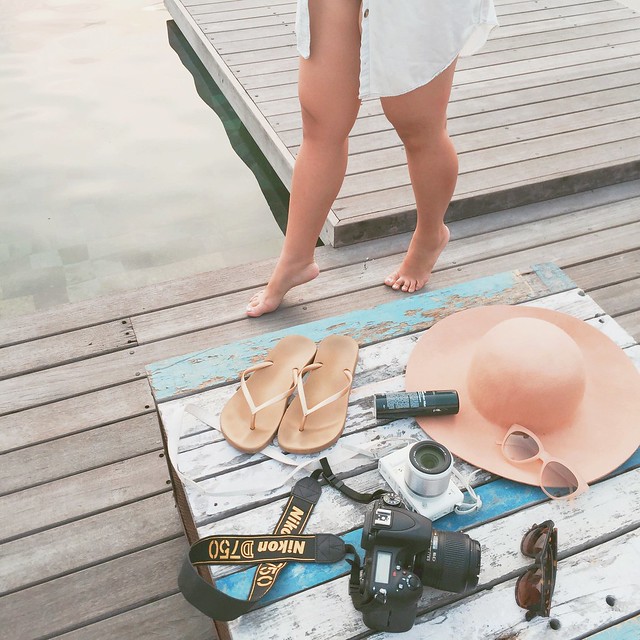 Those of you who’ve been with me for awhile will be familiar with my first brush at holiday-proof photography via waterproof, shockproof, kidproof and ie. lifeproof camera the Nikon AW120. Remember the drama that was Krabi, Underwater? Fish in our faces… and all that jazz.

In August we did Montigo, Batam, a resort that’s gained a bit of a rep as an instagram resort, famous for its multiple infinity pools. I loaned yet another underwater camera from Nikon, the Nikon AW1 – an interchangeable lens camera that also does good underwater. It’s very similar to the J1-3 series in terms of physical appearance, and basically is an amped up, rugged version of the other semi-pro cameras. Inspired by Kimcamjones’s underwater photography series, we headed to one of the many Montigo pools, ready to try our hand at the same..

They’re no Kimcamjones shots, but I’m pretty pleased with the pictures! To create the visuals we did above, here are some things one should take note of:

1. Set your camera to burst mode.
This is so you can capture the entire sequence of the dive without missing a single moment. I was pretty happy to note that the camera has incredibly fast burst and focus capabilities. 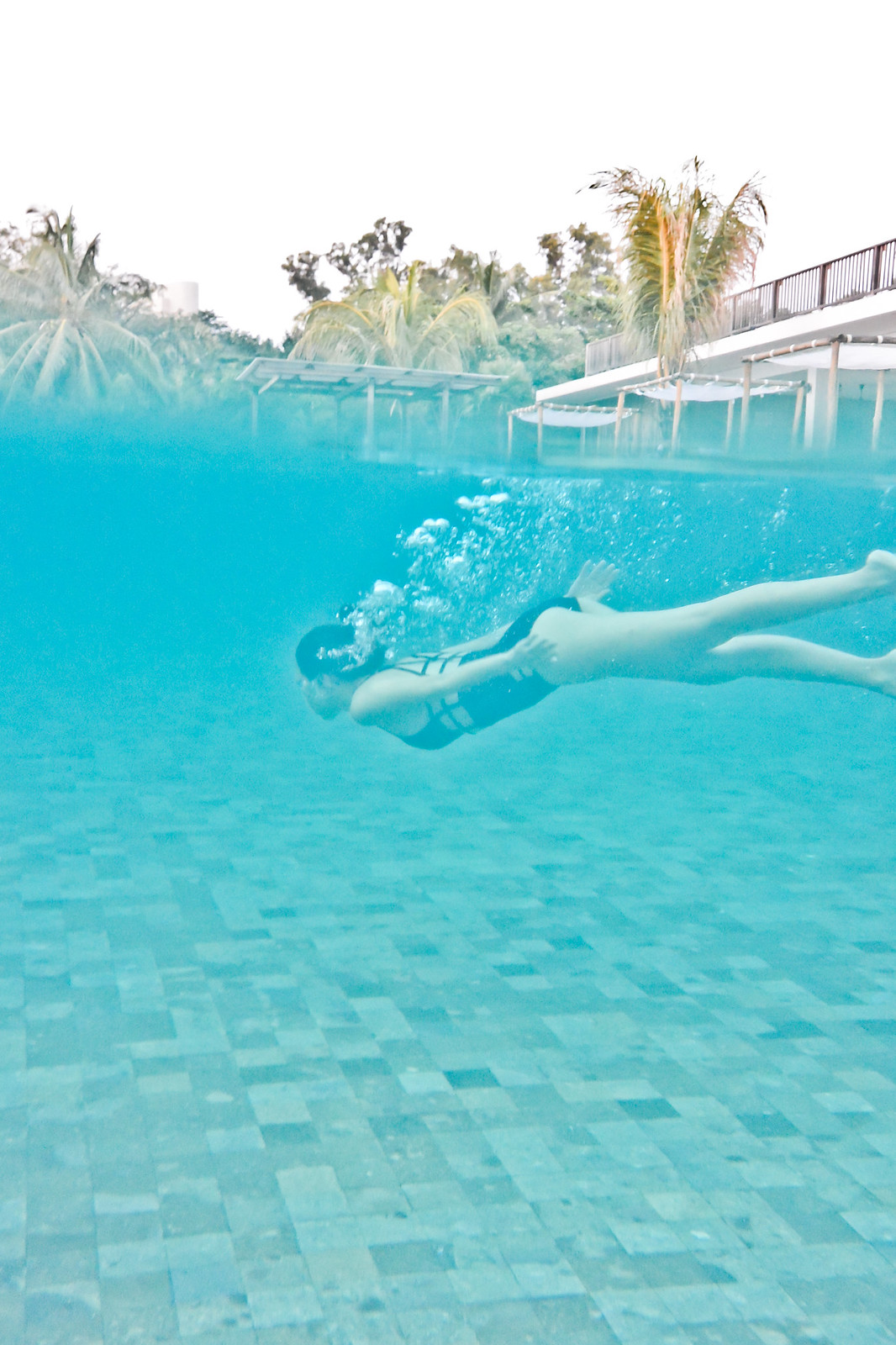 2. If you want the half-half effect, capturing both above and underwater, then you’ll have to play around with the lens until you get it half-submerged just right.
This is pure trial and error, there’s no particular technique to it.

3. Posturing and bubbles
Get whoever you’re shooting to swim down and diagonally towards you, and to keep breathing bubbles out the entire time because bubbles make any picture look better. Write that down, it’s a rule. 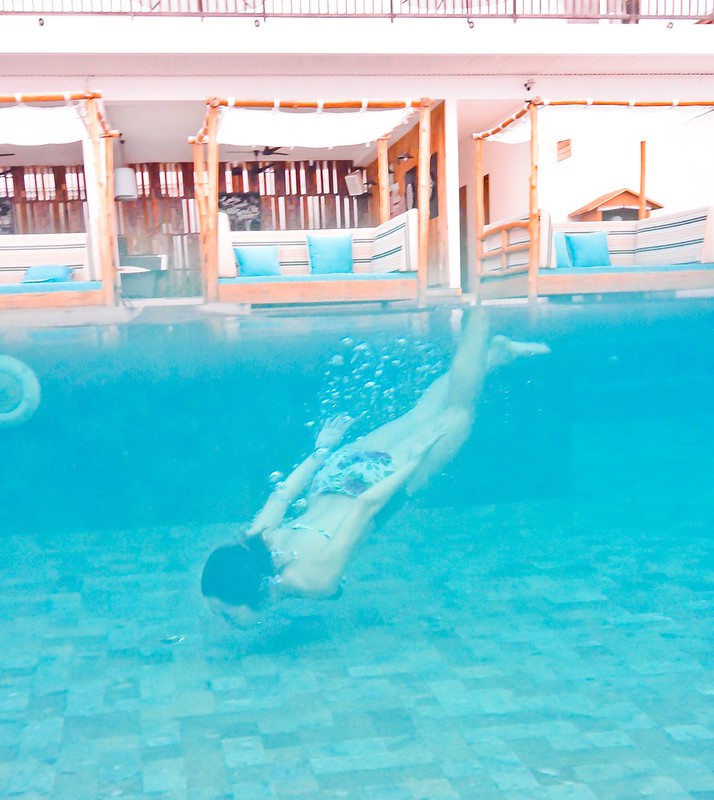 We basically set it to Auto mode because when you’re shooting underwater movement, you dont have the luxury of changing your settings per shot, and also because we’re not experts at photography haha. I’m sure someone more well versed at photography could do it, but this worked best for me. Another thing that helped was the continual autofocus on the camera – that ensured all photos turned out sharp even with motion capture.

Another thing about waterproof cameras, of course, is that you can shoot near or in water bodies without being afraid of getting your camera ruined. The AW1 is also shock-proof, which means it handles knocks a lot better than most cameras, useful for people who dont want to have to worry excessively about scratches or damage from daily use.

Let it be said first that by the time these images were shot, I’d been shooting on my new baby the Nikon D750 for about a month. The D750 is a wonder to me, producing killer shot after killer shot, and it’s created a sort of standard in my head that other cameras try and fail to reach. It’s the same reason why I willingly lug it out day after day, when previously I was willing to occasionally settle for the random iPhone photo. Still, the D750 isn’t waterproof, so there was no standard for comparison there. The ability to take pictures underwater for any camera is a side feature, one that’s pretty cool and handy to have on holidays, but how often does one plunge into random bodies of water, photoshoot-ready anyway? 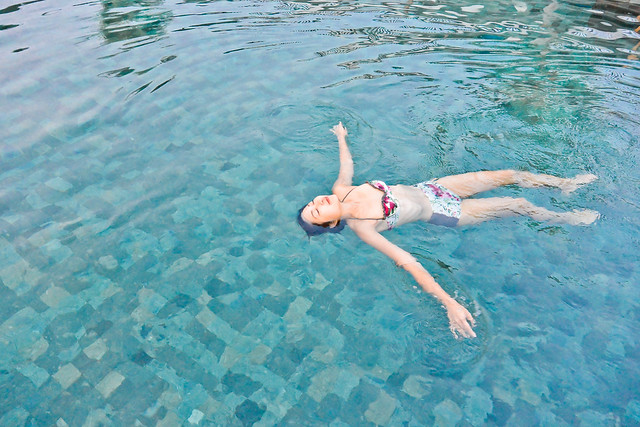 Which is why I’m happy to say that the AW1 takes swell pictures even independent of its waterproof feature, despite that being the first thing one notices about the camera. I dont think it’s fair to compare a prosumer camera to a full frame DSLR, even though I personally cant help it since my main camera is the D750. But in all objectivity, I think the camera produces pretty high quality images – and has the potential for more, given that it supports all regular 1 NIKKOR lenses and gives you more options to play around with (wide angle, fish eyed, prime lenses, etcetera..). The photos are also GPS-pinned, which is how you know it’s the type of rugged camera people bring around the world with them.. and one would expect nothing less of a shock proof, waterproof camera that’s also equipped to do well in the cold. 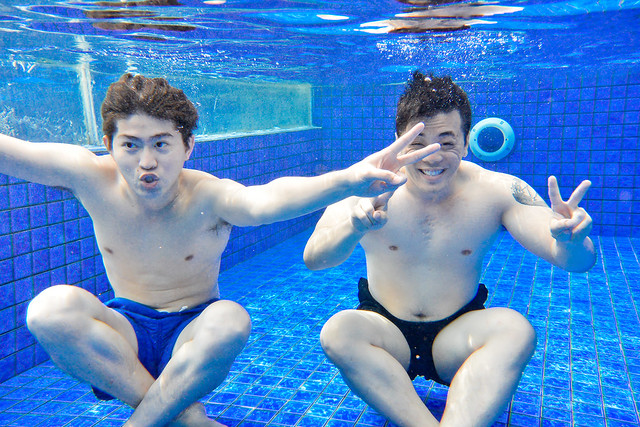 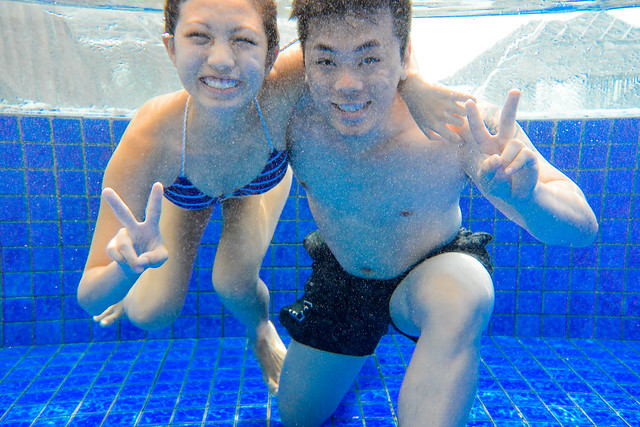 A couple of goofy shots in the Montigo private pools

I do think that with all its rugged-up features, some other things are traded off – for example, right now although the camera is compatible with all Nikkor 1 lenses, only 2 of the lenses are water and shock proof, which means that underwater you wont have the same option of wide angled or fisheyed pictures. A minor issue, really, but just something that cropped up over the course of use. The camera also doesn’t have as good control over the depth of field as what I’m used to – but, again, I’m used to shooting on a full-frame DSLR, so bear in mind that it’s not a fair comparison.

I guess the bottom line is that for DSLR folks, the camera’s ruggedness is cool but also a bit of a step down from DSLR pictures and controls. But for other people looking to purchase a camera that produces high quality images in many possible scenarios, then the AW1 might just be your thing.

Thank you for sending the AW1 over for my trip, Nikon SG! x