*Heads Up: Some of the pictures in this post may cause discomfort*

So, guys. Something I’ve kept a little quiet lately, but I went for an operation awhile ago to fix an ongoing issue I’d been having with my eyes. I didn’t want to talk about it until I was sure everything was ok and I wasn’t going to die of some sudden complication (melodramatic as always), but it’s been about a week now so here I am.

Longtime readers will know that my eyes have always been a bit messed up. For some reason they keep getting into scuffles, and I just thought they were overly sensitive, but then after The Accident last year end, we had them properly checked up to find out exactly what’s been going on.

I dont know how else to put this, so in the most layman of terms, here’s what the situation was:

Basically, my eyelashes are retarded and are growing the wrong way into my eyes. This means they’re perpetually scratching my cornea, causing scarring and hypersensitivity to external factors like the haze, or air pollutants, or dust, which is why my eyes always act up whenever there are strange weather conditions or if anything about my environment is vaguely out of the norm.

So far my contact lenses have been protecting my cornea from the lashes. But at the same time, my eyes are already prone to dryness and the contacts just make it drier. So that’s not good.

The proposed solution: operating on my lower lids to remove and pin back the skin so the lashes grow outwards, and then undergoing lasik. 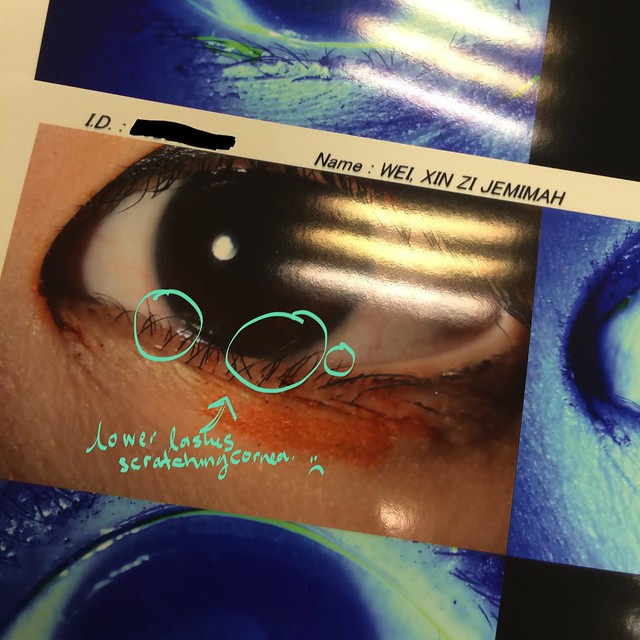 It was a horrible few weeks, I’m telling you. I was in the hospital nonstop for checkups, and I’m super icky about people coming near my eyes but I had to keep having iodine and whatnot dripped into it and it stung, and I had to do blood tests which meant needles and they actually had to pin me down because I AM TERRIFIED OF NEEDLES. And after the nurse took my blood she looked at me and said “Aren’t you twenty two why are you still so scared of needles?”

BECAUSE THE FEAR OF NEEDLES IS A LIFELONG FEAR, OKAY?

Yeah. So anyway after all the checks and being assured that there was no way around the op (“Can’t you just pluck out the lashes???” The answer was no.), I was scheduled for surgery on the 25th of June.

I’ve never even broken a bone before, so it was my first ever surgery and yes I was terrified! I worked myself up into this horrible paranoia that my face would be all swollen and puffy with thick black stitches on it – my friend Penny had to get her knee stitched after falling off a ladder and when I saw the pictures I nearly died. You can’t eat or drink the night before the operation so I was parched and dizzy while sitting in the hospital waiting to be called. And when I was lying on the bed being wheeled into the operating theatre I thought to myself goodbye sweet world, it’s been a good run.

Come to think of it, I may have panicked a tad too much. I was only authorised to undergo local anaesthesia but I was freaking out so much I think they just whacked the sedation because the last thing I remember I was being transferred from the trolley bed to the actual operating bed and then everything from then on was black. I slept like a baby though the whole thing, thank God. 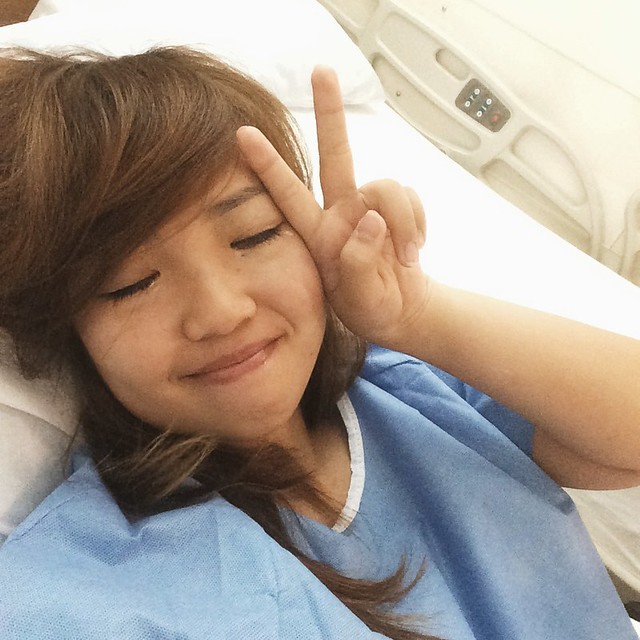 I don’t know how long I was in there but I woke up in a completely different room, freezing and hungry. Did you know you’re not allowed to wear a bra under the hospital gown?? In the air conditioned hospital?? Makes no sense, but ok. Someone noticed I was awake and ran to get the nurse, and she came back with hot milo which made me feel very very emotional, haha.

Then I asked for a mirror and I looked into it prepared for the worst and saw the line of small black threads criss crossing my lower lid and I thought well I look like frankenstein but thank God the thing’s not swollen. And then I dont remember much else of the day.

I think the sedation took ages to wear off because I was woozy pretty much all of that day and the couple of days after. On the plus side..

LASHES ARE NO LONGER SCRATCHING MY EYES

This is something that I’ve never felt before! If you look at the picture above, my lower lashes are actually growing outwards from my eyes like, uh, every single other normal human being. Cheers to never having to go to the hospital for stupid retarded eye-related issues again!!!!!

Right now I still look a bit like a stitched up mess, but I’m really hoping that they’ll heal properly and in time for London. Let me show you my close up frankenselfie: 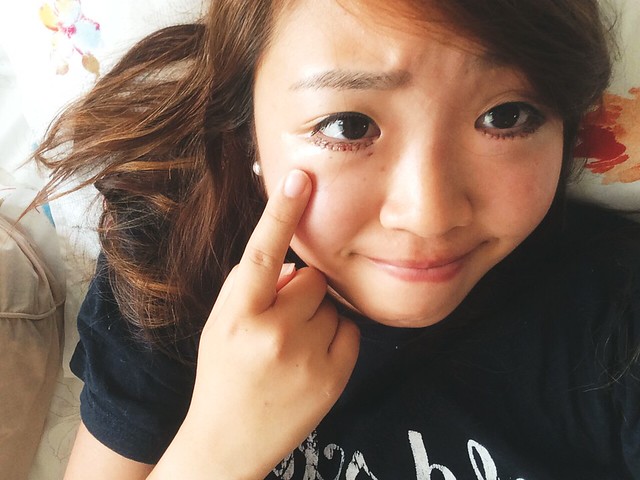 Had to remove my nail polish before the op because apparently your nails will indicate to the doctors if you’re going to die during the operation from an allergic reaction to whatever they’re doing.

This was day one, after the op. You can really see the stitches, and I’ve been told they look a bit like something goth japanese girls would deliberately do to themselves in the name of false lower lashes, and I’m totally okay with that. Dark purple bruises started appearing after day three, which apparently means it’s healing, so that’s great too.

The total cost of the operation was about 1.3k, which we paid for via medisave. Unfortunately because it’s a birth defect, I can’t claim insurance for it, but I’m just thankful it didn’t cost more.. The opportunity cost was a lot higher – two weeks of home arrest by doctors orders, which meant forgoing a bunch of campaign shoots and gigs. I tried to cram everything before then, which meant that the time in between Hong Kong ant the operation was a mad rush blur of shoots and green screens, but it was still a huge pinch. Two weeks of down time is seriously no joke if you’re a freelancer, which is basically what I’m loosely classified as, I guess.

So yes, I’ve been staying home the last week or so, which has given me some much needed rest, but which has also driven me nearly up the wall in boredom. Summer is really the worst time possible to be out of action, but it is what it is I suppose, and it is a small price to pay for good health in return. So pray for me, you guys, I hope to be out and about not a day later than two weeks from my operation date, and I really really hope the recovery process goes smoothly 🙂