#1945 | The Broke Student’s Guide To: Shopping Abroad from Home with Airfrov 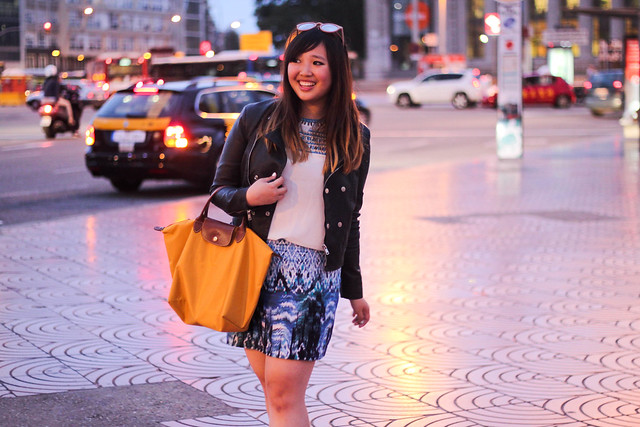 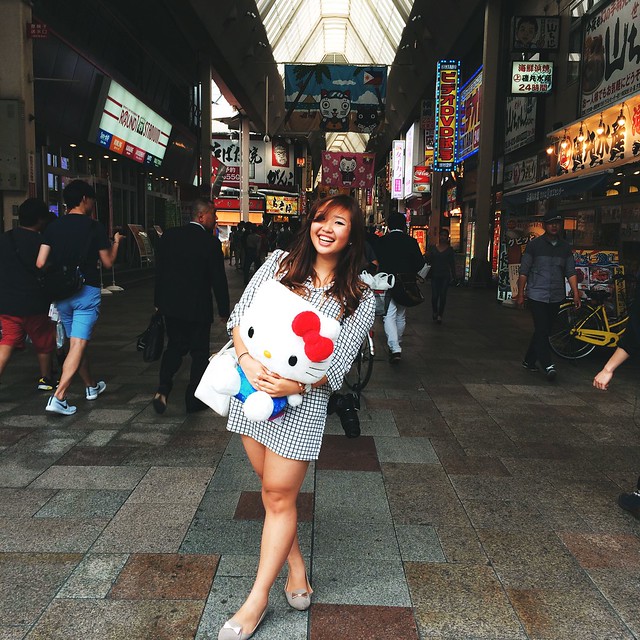 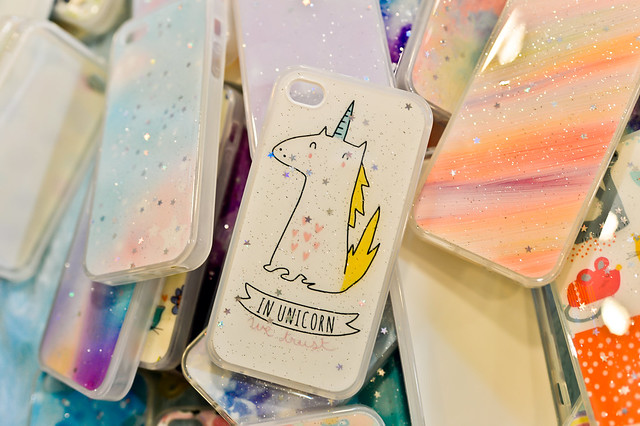 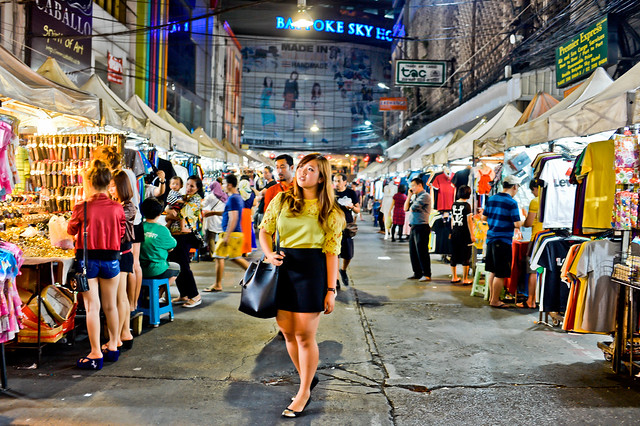 Some visuals from shopping streets around the world

So, without beating about the bush: I travel a lot. I’m very blessed and fortunate to be able to travel so much. It’s something I love doing, both exploring new places and writing about them, and I’m very grateful to have been given the opportunity to sustain myself doing just that. On the other hand, this is a rather recent development: it wasnt always like this. I remember post-A levels, wanting to take a trip to Bangkok with some of my JC girlfriends. Such were the arguments for and against the trip:

For: Everything will be SO cheap there! A top will cost about fifty cents!
Against: Some of the girls in the group don’t really want to spend so much on an overseas trip.
For: But everything there is really really cheap and we can go shopping crazy!
Against: But it evens out once you add in airfare and accommodation…

To be fair, it didn’t make sense to go – we had just finished our A levels, and had spent all our money on starbucks during study sessions (studying is expensive business you guys). No one really had money to go. Still, we had dreams..

But yes. My point is, traveling is expensive. It can be done in an affordable manner, but it’s still a relatively pricey venture in this day and age, which is why I do my broke student’s guide, because the pain is real, eh. Still, the world is becoming smaller everyday – more budget airlines are popping up, running promotions, and putting traditional carriers on edge, people are more mobile now, and travel innovation is moving faster than ever. Airbnb is pure genius and it was started only less than ten years ago. We used to all rely on travel agents and now fare comparison sites give us the ability to plan our trips to the tee. Upstarts like me write guides on how to survive on a hundred bucks per city. There are a zillion apps to show you the best things to do, where to do them, and a million alternatives that are cheaper and just as popular. Things are moving in the travel sector, and fast.

One of the recent innovations that caught my eye was this new service-based website called Airfrov. I first saw it on Facebook, and then when they emailed me to invite me to try out their site. The idea behind it is basically the creation of a portal for travellers to earn an extra buck out of their spare luggage space, and for consumers to hitch a ride or tompang a traveller to get something for them that cant be found in their home country. 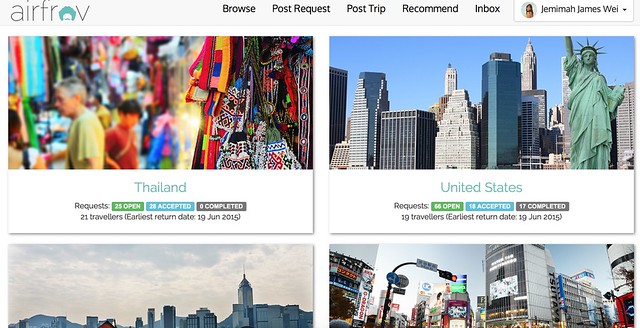 The idea itself isn’t new. So many times I’ve asked a friend to carry back some fairy lights from Bangkok for me and vice versa – because those things are about four bucks SGD in Thailand and have you seen how expensive they are in typo?! Twenty five bucks is how. Airfrov just took the idea and tinder-ed the hell out of it, matching up travellers and shoppers online like some form of shopping cupid.

Now, for broke students, this works two ways..
If you’re broke and have no money to travel
But you really really want something you cant find locally, you can pay someone to buy it back for you. This is especially useful if none of your friends are going to the region, or if you don’t foresee yourself heading back anytime soon. 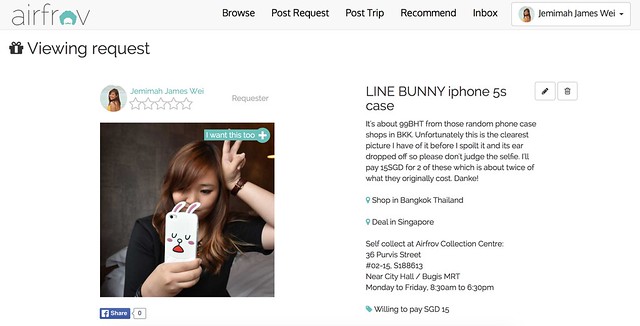 This is my own request. I really freaking want another LINE bunny phone case because mine spoilt sometime last month (the ear tore off, wear and tear, etc) and they don’t sell it anywhere in Singapore. This drives me nuts because it’s so damn cheap in BKK but I don’t think a 99BHT phone case justifies a 150SGD flight to Bangkok, no matter how badly I want it.

So.. tada! I post a request for it, specify that I’ll pay 15SGD for 2 of them, and all the people who have registered as travelling to BKK soon get a notification. Whoever takes it up then buys it back for me and I pay them. The minimum offer is SGD15, which is why I specified that it’s how much I’m willing to pay for 2 of them, because honestly, they cost about a sneeze in Bangkok. And now all I have to do is wait for someone to hopefully travel to BKK, see them, get them, and bring them back for me! 😀

And truth be told, if people start selling these in Singapore they’re probably going to cost a bomb because of how cute they are, so I really don’t mind paying seven bucks for the case even though the BKK cost price is about 3-4 dollars. I still see it as saving money.

Or, if you’re travelling and want to alleviate some of your travel cost..

How it works is, if you already know you’re going somewhere and you dont mind sparing some luggage space for cash, you can post that you’ll be travelling to this place and till when. Then when someone wants something from HK and posts a request, you get a notification and you can decide whether to take it up or not.

This is never going to apply for me because I never have enough luggage space even for myself, let alone someone I don’t know, but I imagine it’d be useful for people who do have extra luggage space and want to earn some money. I mean, look at this: 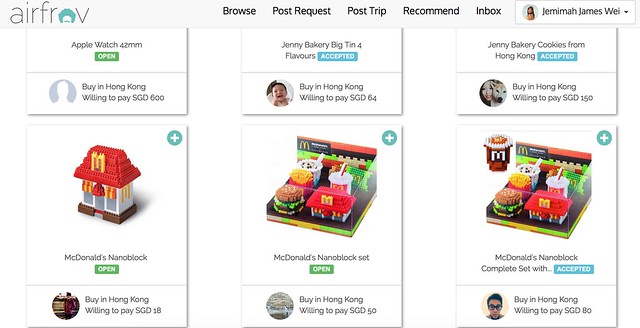 Walao look at how much people are willing to pay for Mcdonald toys??

Some people apparently really want those toys. The difference between the amount the two guys are willing to pay for it just shows that even if the cost price of the toys are about 50 bucks, some dude is going to earn 30 bucks just by carrying it back because another person in Singapore is willing to pay a premium for it. If you’re a student, well, that’s pretty decent money for a tiny square of your luggage space, no?

PS. Ever since composing this post, the offer for these toys have gone up to 120SGD. 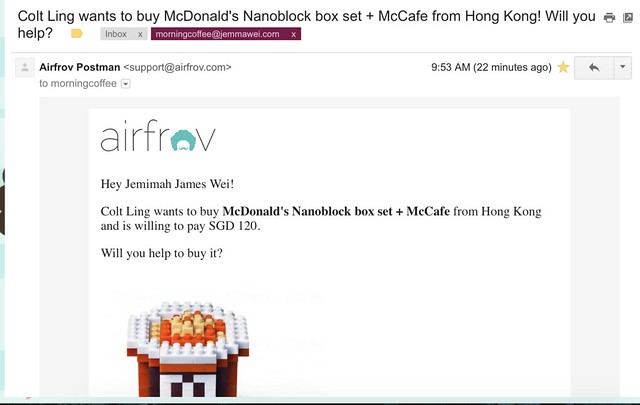 I registered the fact that I’m in HK right now and I’ve been getting notifications for people who want things from HK, like the one above from this dude with cash to blow.
What if you just want to get something special for an upcoming occasion but don’t know what to get?

Go and browse lor. The fun part about Airfrov is basically that it’s like an open market, where people are posting requests and waiting for them to be taken up. You can even see when the request has been completed or undertaken. If you want something special or unique for, say, a family gathering, but dont know what to get, you can always go browse the requests to see what other people are getting. Eg. it looks like mcDonald nano blocks are a good idea if you want to wow your guests right now.

Alternatively, Verified travellers can also post recommendations for a place to give you ideas – this is mine: 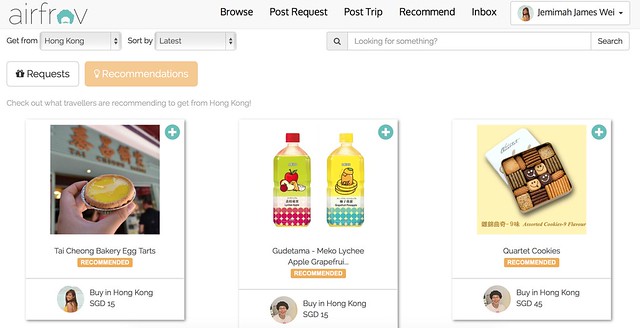 Bc it’s really the best egg tart ever, ok?

I think my suggestion is damn good because if you have these life changing egg tarts at your party or whatever everyone will forever think you are damn cool and throw super parties because YOU CANT GET THEM IN SINGAPORE. But yeah I dont have luggage space to offer to carry it back for cash so I just recommended it and someone else can offer to bring it back for people who might be interested haha.

Safe a not ah?

Well I’m still waiting for someone to take me up on my LINE BUNNY PHONE CASE Offer, so I haven’t completed any transactions yet. I asked Airfrov about this and this is what they said:

Me: So if a traveller accepts the request, does he/she pay for the product out of his/her own pocket first?
Cai Li (from Airfrov): Once a requester accepts the request – the traveller will have to fork out the money first before getting reimbursed after delivery. The money will have been deposited with Airfrov though, hence peace of mind for both parties.

So you can quote them on that.

So, a little something to help you get started

Airfrov is a relatively new service, so they have very generously offered the first twenty of you who sign up a SGD25 credit voucher to use on your purchases and requests! Just enter this code: ULK3S into your AIRFROV Credit and you will get $25 off your next purchase. No prior purchase necessary. Just for reference, if you refer a friend to Airfrov you get five bucks credit once they complete a transaction, and while that’s cool it means I am the best friend ever because I am worth five friends hahaha.

And when you get the credits, you know what to request for. 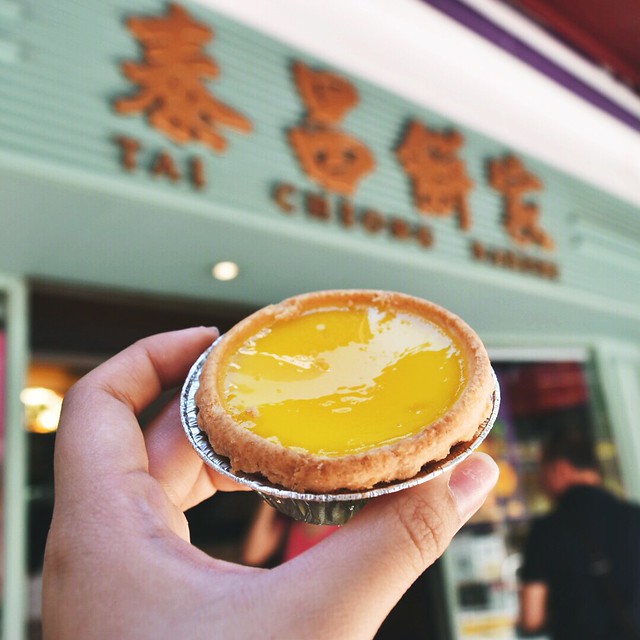 They are really damn good ok??