Some days you wake up with hardly anything planned and then life throws some insane stuff your way and by the end of the day you can hardly believe or recognize your morning self. Lots of you might have already seen from twitter or instagram that Andrea and I have finally gotten a permanent hair job done at urbanhair – it was such a spontaneous thing, with a morning text from Eugene asking if we’d want to drop by in the afternoon and a lot of insane screaming and panicking over the phone with Drea as we debated the pros and cons of colored hair before confirming our appointment. But before i get into that (because it’s a mad long story and i want to capture every moment of it down), the entire day was honestly one of my craziest days ever.

My results weren’t the only thing i woke up to- my dad woke me up at about 830am going eh. eh. look. and i basically hyperventilated because this huge brown parcel was sitting at the foot of my bed. A parcel that huge could only mean one thing:

I ordered the leather bound edition of this book i can’t understand for my best friend’s twentyfirst over a month ago- he’s been drooling over it since forever, and it’s coincidentally possibly going to be one of his textbooks or reference books in college when he goes off to London to study some weird complicated form of business that i also cant understand, so i thought it’d be a nice gift since he wanted it so badly and anyway if nothing else he could impress the rest of his coursemates with the gold leafed leather bound version while they used the normal paperbacked one bahahha. Unfortunately, this book caused me more heartache than any other book i’ve ever read, debatably as much distress i was under when Sirius died in Harry Potter & the Order of the Phoenix (little bit of me died with him), because Amazon/bookdepository customer service officers are 1. assholes 2. irresponsible shitheads and 3. assholes. I was expecting the book only to arrive after he’d left for the UK so it was honestly the best christmas present ever that it came before then- completely unexpected!

In other news i am also boycotting amazon and bookdepository for aforementioned reasons. Consequently, I’m probably going to get a barnes and noble nook over an amazon kindle. Bah.

I was so super excited that i had to get it to him immediately- Andrea (complete sweetheart) drove me over to his place bright and early in the morning to surprise him. 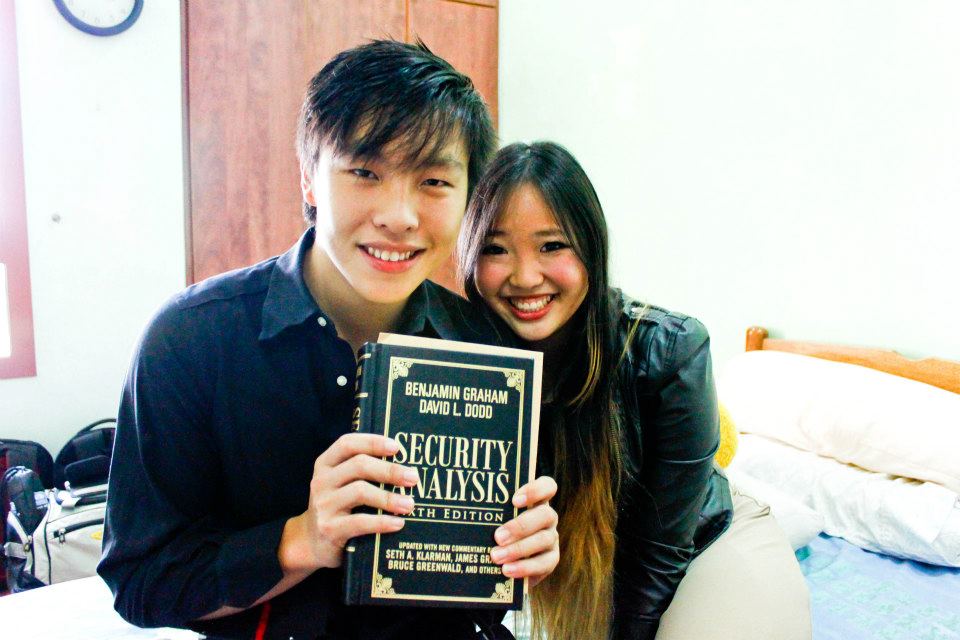 And surprised he was. Happy twenty first Fred, the best best friend a girl could wish for. May this book bring you to the top of the deans list and all that stuff. x ♥

Drea and I rushed off to an interview and informal shoot after that for this new magazine that NTUC’s Entertainment branch, Nebo, is going to be launching come mid 2013. I don’t have any photos yet but I’m pretty sure sometime in the first quarter of next year I’m going to be excitedly waving our feature in everyone’s face so no worries about that. It’s the first interview that Drea and I are doing together for a formal local publication- our previous interview was done for the Nanyang Chronicle. It’s so surreal. We had the shoot and interview at the Gardens by the Bay: i hate the place because it’s so hot, but thankfully we did the interview in bakerzin (air conditioned with a side of iced latte thank you very much) and the shoot in a relatively more cooling part of the gardens. After that we rushed off to Urbanhair at MBS for our appointment and so begins the very long story R U READY 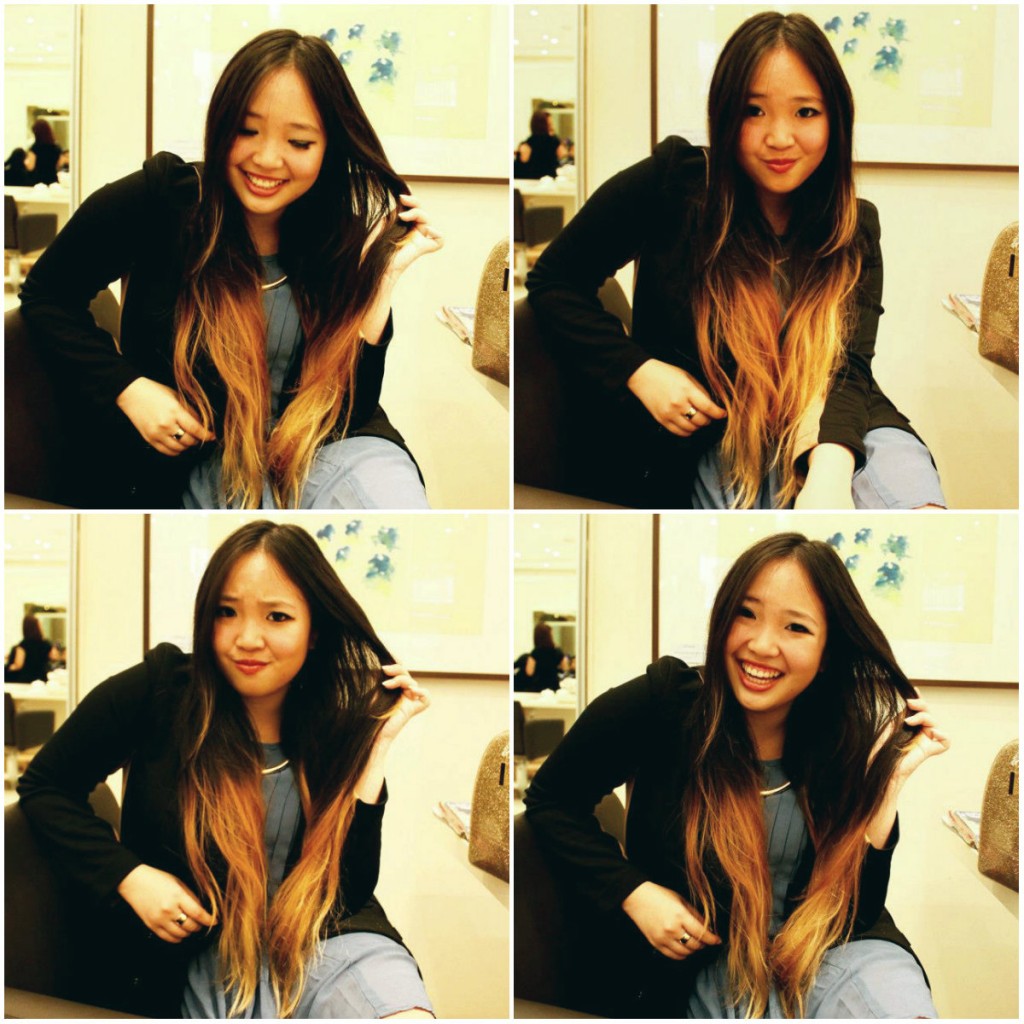 I’ve had ombre blonde hair for the longest time, inspired by fashiontoast’s rumi, and i love it- it’s been about a year and a half now and I just.. love it more and more every day. There you have it. My love affair with my hair. Anyway. I went to the salon and requested the same thing, but with a more gradual gradient, and they said okay sure, but do you want to try something a little different? A week earlier i was speaking with Syaf and she planted ideas of adventure and spontaneity in my head so i took the ultimate leap of faith: i told Cecelia (my hair stylist and colorist for that day)

i trust you, do whatever you want.

THIS IS YOLO BABIES. 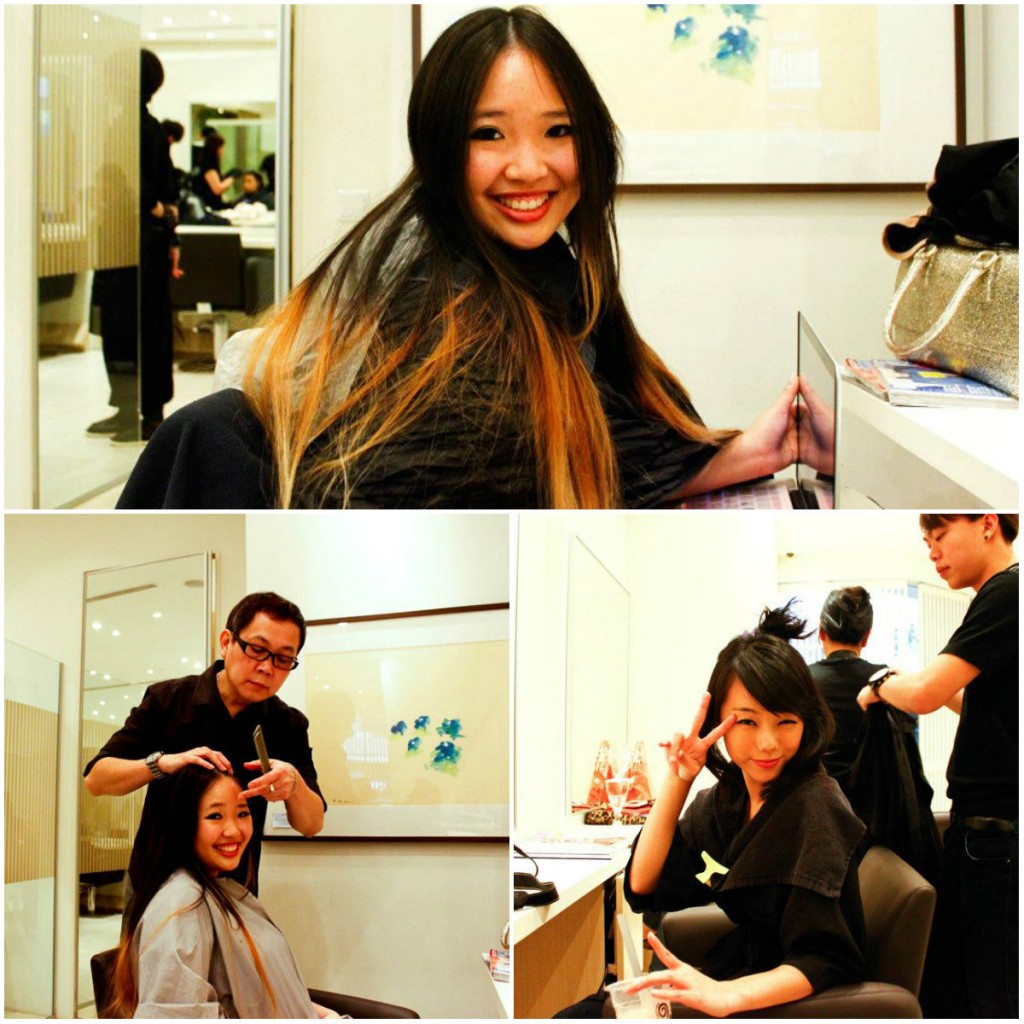 Sitting there with my macbook so i could do my writing and work whilst they tried figuring out what to do with my hair. Eugene cut a lot of it off- i know after hair hits a certain length it just looks long and noone can really tell if it’s any shorter, but i live with it so the length difference is really obvious to me! Previously i had a blunt cut done so Eugene added in layers for volume and snipped off all my hair ends to keep it healthy. I was gasping each time he casually sliced off whole chunks of it, but i’d trust Eugene with my hair anyday so i wasn’t unnecessarily worried.

Noel and Cecelia were my colorists for that day- this is the pre-lightening stage where they bleached my hair before adding color on later. I specially requested that they dye the hair a few inches away from my scalp because i’m a bit paranoid about chemicals touching the scalp itself, also, i’ve got a bit of sensitive skin. LIKE MY SOUL. No I’m just kidding im dead inside. Anyway. I sat there cheerfully typing away and bombarding them with questions they must have heard a thousand times before, and was also informed that i won the award for the customer having the longest hair, hands down. Even after Eugene took his scissors to it. You know me. I just rake in the awards huh.

Anyway a couple of hours later, it was time for the big reveal. The entire time they wouldn’t let me see what was going on behind me (you can’t really tell anyway, what with all the color cream just looking wet and blonde), and made me close my eyes till they’d blow-dried it and fluffed it out, so i was kind of really anxious. Not worried, because i trust them, but anxious because for all my show of bravado the idea of large change still scares me slightly. 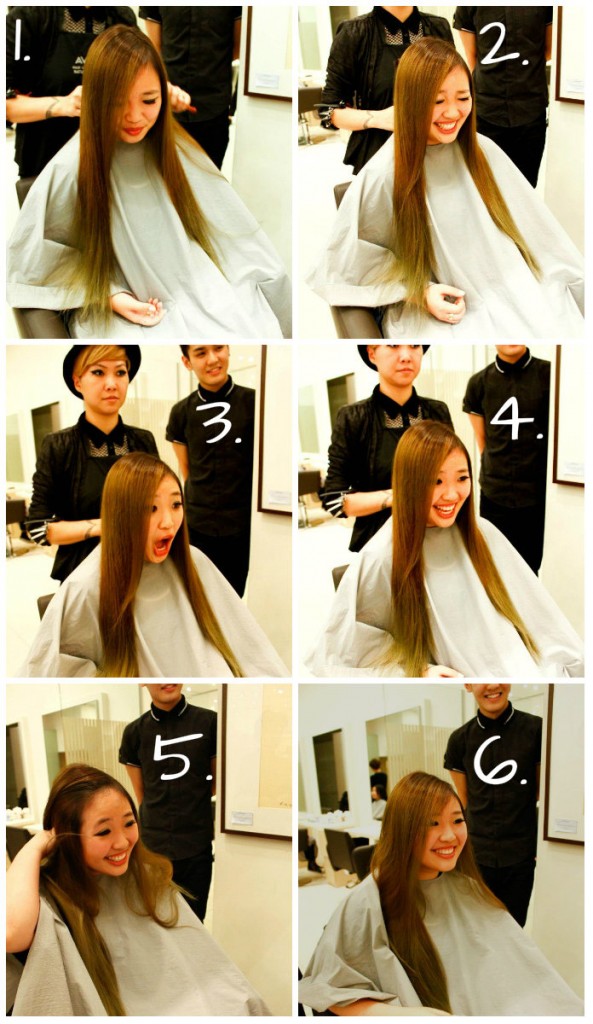 CRAZY, RIGHT? It’s so different!! This is called a soft ombre, done in the cooler tones of ash, brown and green, as opposed to my original warm blonde hues. Cecelia said that cooler tones suit asian skin tones more, and i really love how the ombre is so insanely gentle that you hardly realize it’s changing color till you realize the ends are green and ash instead of brown! It’s a lot lighter in real life, i dont know why it turns out so dark in photos, so i consistently look like i’m being surrounded by a floaty halo of bright waves. Curls were tonged in soft japanese waves, but i like the hair straight too. Either way goes.

I’m still slowly trying to get used to my new hair- the thing is, i keep forgetting what i look like so i get a bit of a shock everytime i pass by a reflective surface. I like it though, it’s a very different look, and although i miss being blonde im pretty sure it was time for a change: anyway, this will eventually fade to a platinum blonde ombre, so there’s that. I love how they dyed the top in layers- it’ll continue looking like the color gradually seeped downwards when my hair grows out, one of my favorite things about the ombre hairstyle. Forward thinking or what. (Actually, really just for lazy people like me.) 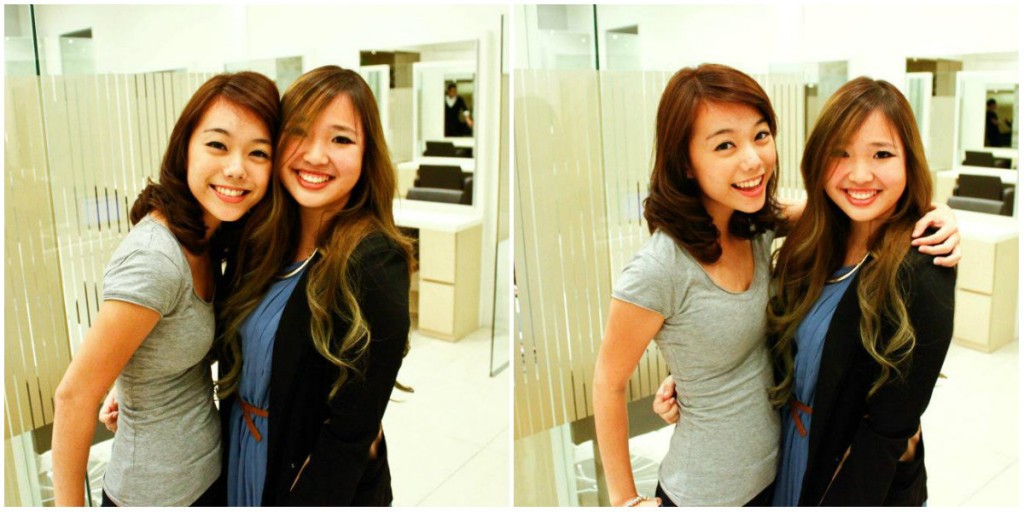 With Andrea, who lost her hair virginity to urbanhair (hur hur)- it’s now a lovely shade of dark brown! Not gonna elaborate too much because i’m sure she’s gonna want to relate her experience more in detail on her blog, but spoiler alert: it looks great.

I’m wearing my standard black blazer and a zara kate middleton inspired dress. Because it’s the closest i can ever get to living my princess dream. Ah well.

Anyway, a little reminiscing over the various stages of my hair:

I don’t think i’ll ever regret anything- up till now i still pine over my pink hair, and i even liked it when it was full on black, but honestly, what’s life without a bit of fun trying new things? With all that’s said and done, i’m so grateful and glad that all the crazy shit ive done to my hair hasnt driven me broke. Thank you so much Urbanhair, you guys are the best x

I spent my evening today in the most lovely way- the year end church service and then a dinner party at my best friend’s place with his family, friends and girlfriend- which also meant plenty of reactions to the new hair. I was worried about how different it looks at first, but about 70% of the people i’d met today seem to prefer this new one: glenn commented that it’s generally a pretty rare color (you really have to see it in real life to get it) and my best friend sealed it by gently knocking his fist against my head- his version of a real life stamp of approval. And that’s good enough for me.