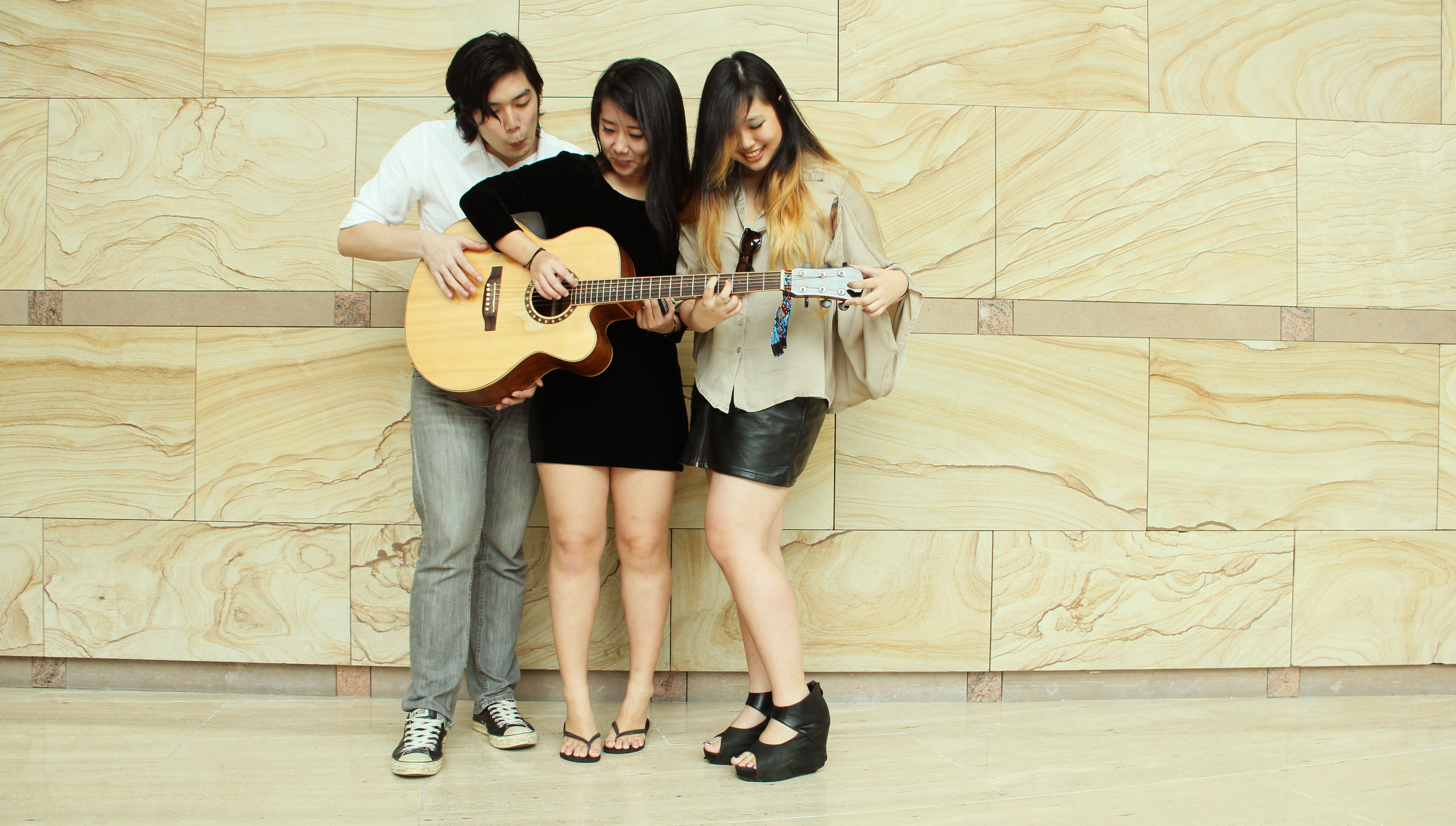 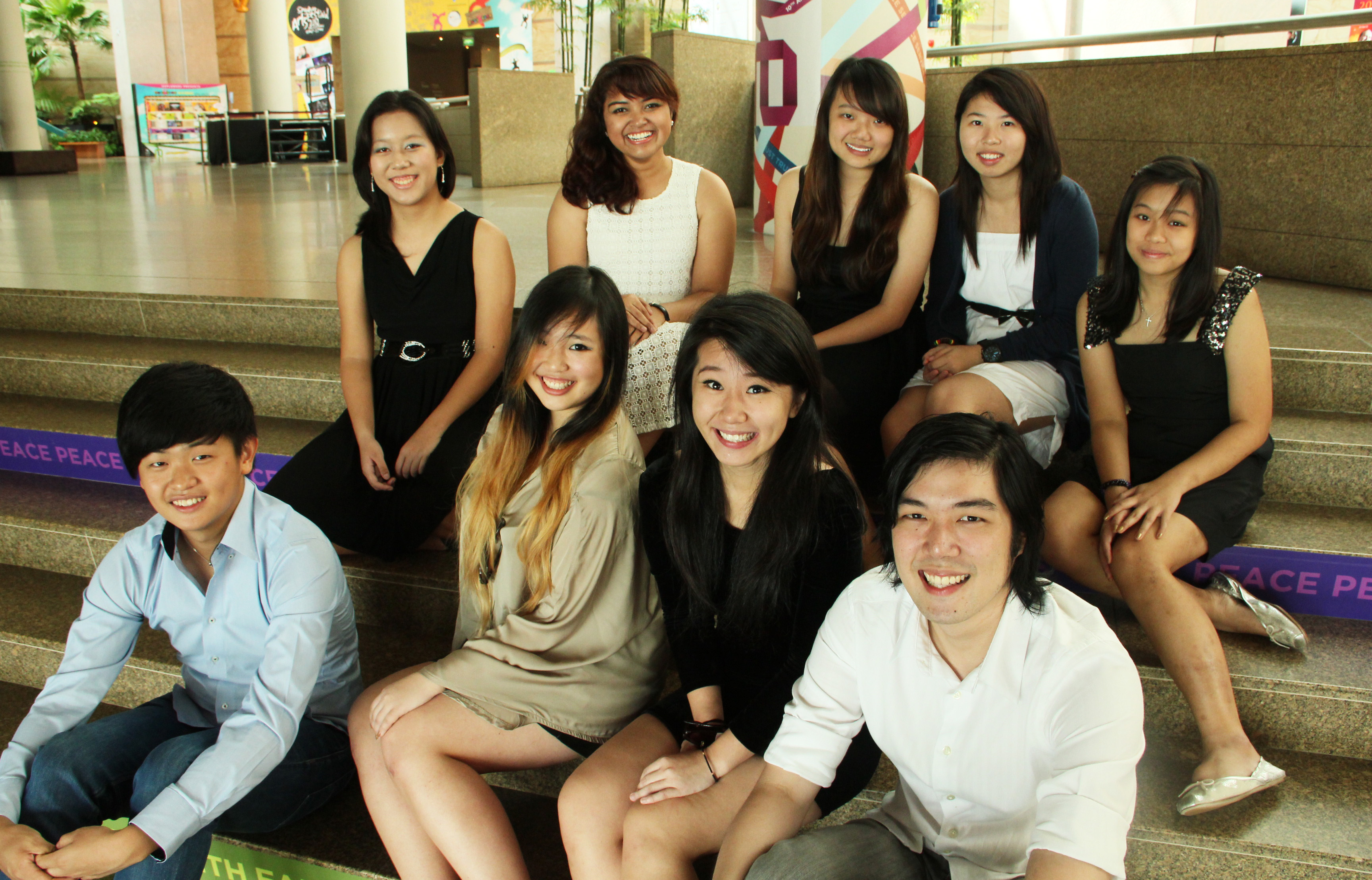 Moving on, work is moving towards the scope of mobile increasingly. Today a representative from Mobext came down to conduct a mobile training workshop- and i thought i’d share a few intriguing case studies. The kind of stuff advertisers’ dreams are made of.


A campaign run in South Korea for Tesco, the giant supermarket brand. I’d love for something similar to happen in Singapore, but i don’t know if our newly revised 2gb data caps can handle it.


This reminded me of Ju’s hair tattoo awhile back. It’s really innovative- turning your customers into your brand advocates, and marrying the offline and online curiosity generated into a brilliant campaign. If you like it so much, why don’t you do it, jem? you ask. Well, I’m terrified of cutting my hair and this is a legitimate phobia so get off my back about it. If everyone else does it its totally cool though.


I wouldn’t mind being woken up by that, i think.
They were nominated for the Cannes Cyber Lions 2008, but i don’t know if they won.

Essentially achieving top of mind awareness for their brand by starting off each individual’s day with a reminder associated with Axe. Curiously, it reminded me of Carly Rae Jensen’s Call me Maybe, only performed by a bunch of SNSD lookalike girls in hot shorts and curly hair.


Another one that was wildly popular with the guys, i must imagine.

Just to add context to this video- Lynx is a brand of deodorant, and their tagline is Even Angels Fall as in, you’ll smell so good and exciting that you’ll cause even angels to fall. Slightly cliche, but worked wonderfully here. A splendid example of how augmented reality can be integrated into your campaign.


Insanely cute, i’d love for this to hit singapore!

Basically, you collect butterflies and they give you coupons or discounts. You can trade butterflies with your friends too. It’s like a cutesy version of pokemon trading cards and foursquare. And it works- I REALLY WANT THIS APP TOO.


Nominated for the Cannes Lions 2011.

This is the kind of thing i can imagine the likes of Syaf and Fee digging. Letting music and clothing taste curate each other- my only concern is, what happens if your neighboring dressing room is playing metal while you’re dressing in a tutu? Also, queues are obviously not a concern for them in this video, but all I’m saying is if i get into one of those dressing rooms, the party is on. And if you think you can get me to just try on the clothes and leave, you’ve got another think coming.

Insane.
Six examples of fantastic advertising campaigns made of stuff all of us dream of. You orchestrate a campaign like this, and for the rest of your life you can walk into serious meetings in sneakers and jeans and last night’s pullover. And when they ask you exactly what you think you’re wearing, you can go Chill man. We’re in creatives. We can wear whatever we want. And noone will bat an eye.

I hope you enjoyed the case studies as much as i did! I conducted a social media 101 workshop last week for a bunch of media managers, and my key takeaway was:

Clients all want the same thing. To go ‘viral’. (though half of them probably don’t know what they mean by the word viral but thats another point altogether) And Consumers all want the same thing- An easier life. Well, they want free stuff mostly, but besides that they want an easier life. Every campaign you run should aim to fulfill this massive desire to make your consumer’s life easier, and things should take care of itself from there on.

In any case, i have news. I can’t believe I’m saying this you guys, but i’ve finally succumbed and joined foursquare. This is after one year of vehemently shouting NO, ITS STALKERISH AND FREAKY AS SHIT AND WHY DO YOU WANT TO LET PEOPLE KNOW WHERE YOU ARE ALL THE TIME ANYWAY???? Trust me, Christel had an absolute ball of a time rubbing this in my face during lunchtime.

I was going to lie and say that it was part of an experimental research thingy I’m doing for one of my client’s social media campaigns, but then i was like yknw what, sod it. Im going to open myself up to judgement and tell the truth.

You see the thing is, I’ve got mild sheep syndrome. I get horribly paranoid whenever it seems as though i might be missing out on something fun. This is also why when i first started blogging, i had the compulsive urge to create an account with every single blogging host out there. Livejournal, WordPress, Blogger, Xanga, Posterous, Tumblr, you name it. I also get upset when i feel as though I’m left out of things all my friends are privy to, like the Shaker Fries Appreciation Club.

So we’ve established that I’m a wuss who HAS to follow the trend or i get upset. This explains why i have about three pairs of high waisted shorts that make me look like humpty dumpty which I’ve collectively worn out about 1.87 times in my entire life. Other times i put them on and strut around and home in them trying to convince myself that i didnt waste 80 quid on a pair of unflattering shorts from topshop, or whatever. Can you imagine what it did to me to hear all my friends doing things like checking in and collecting badges??? I wanted to check in too. AND I REALLY, REALLY WANTED TO COLLECT BADGES. 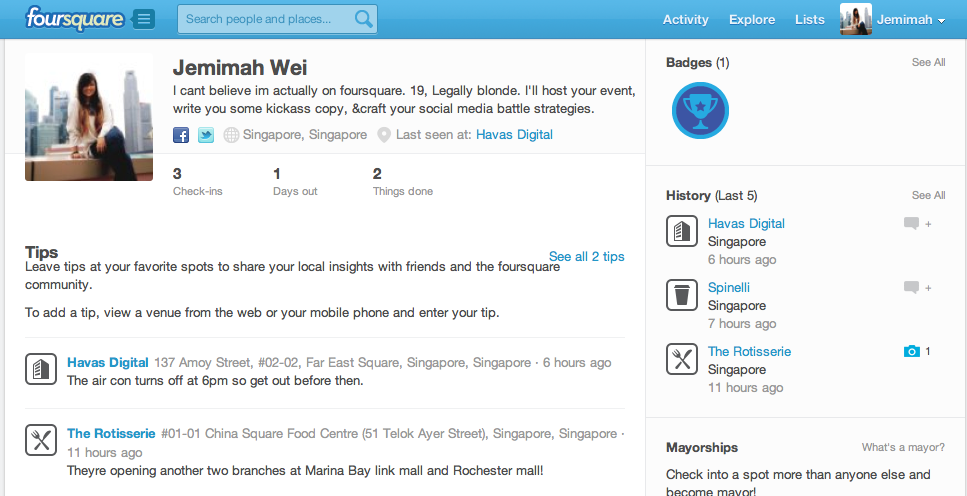 As you can see, i am contributing healthily to the general knowledge surrounding areas i frequent by peppering the foursquare community with useful nuggets of information.

Ha ha ha i am totally kidding. I just wanted the badges. Also, a mayorship or two.

I know what you’re going to say. Blah blah blah what a wuss she has to follow all these trends i bet she also says yolo at everything she obviously has no life outside of her online persona she must be so insecure. See, i said it for you already. Im making life easier for you, and following the basic rule of marketing and advertising! Wow, i sure do learn fast.