It’s going to be another one of those rambly posts full of things thrown in as and when they cross my mind. I should really come up with a category for this, like Weekly Page Analytics and Insights but 1. I am not Facebook and 2. Noone cares. 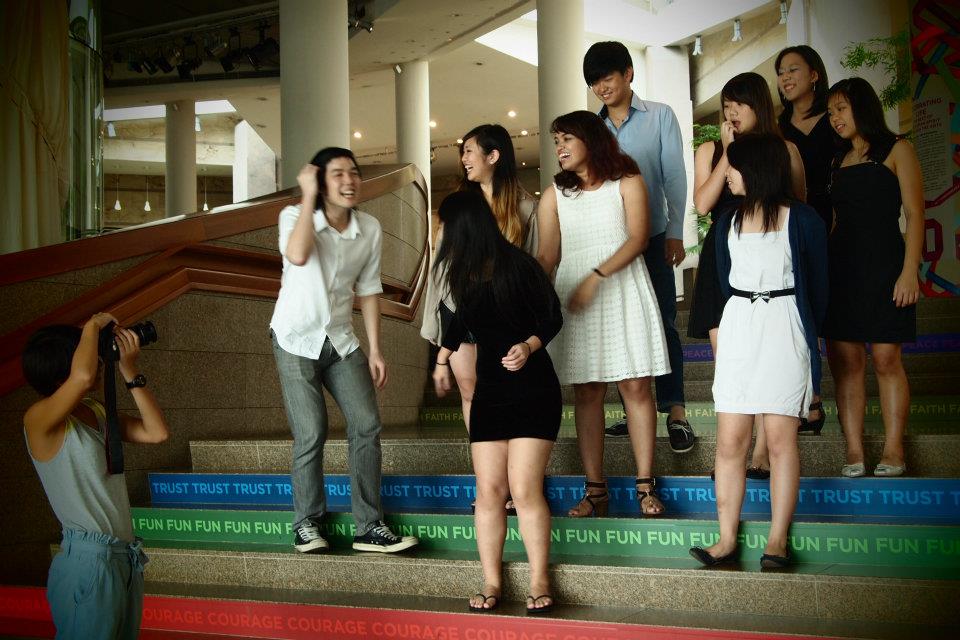 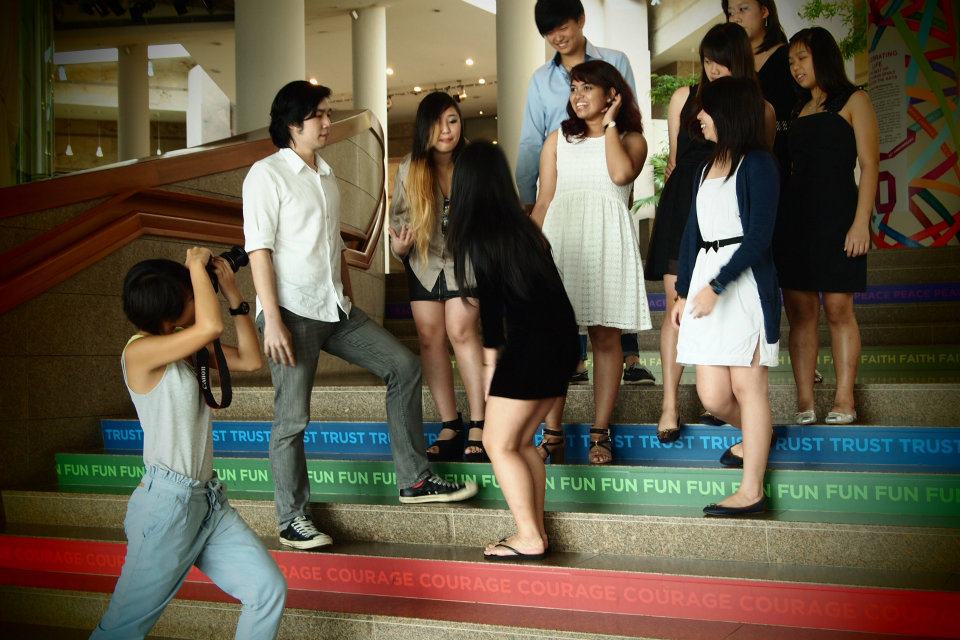 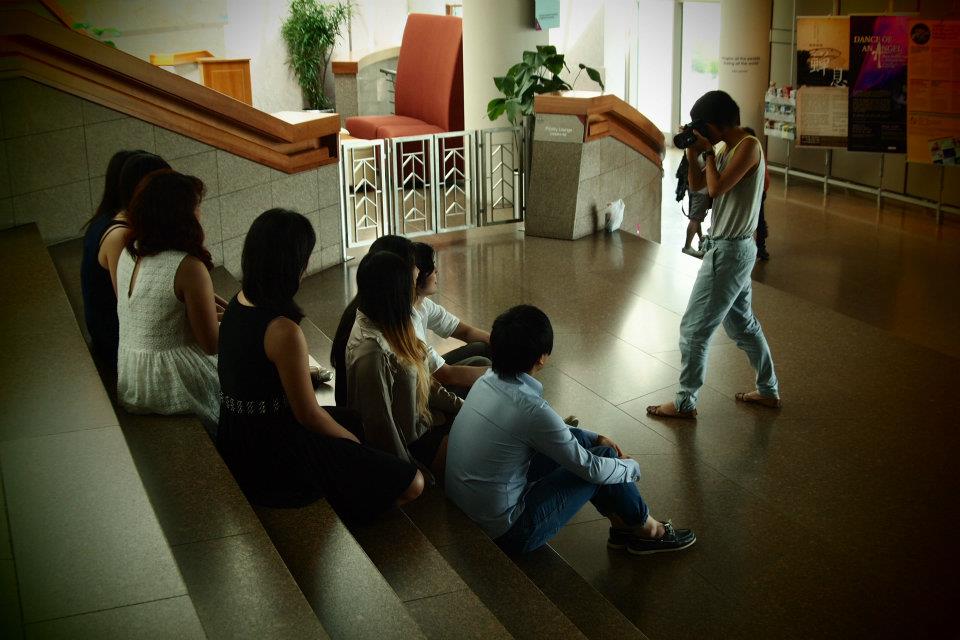 Had a shoot on saturday at the Esplanade for this concert that cindy, marcus and I are singing at. Originally the shoot was scheduled 8:50am (ikr, who is functional at 8:50am on a saturday) at the botanic gardens, but then it started storming and anyway i swear the weather is a troll. 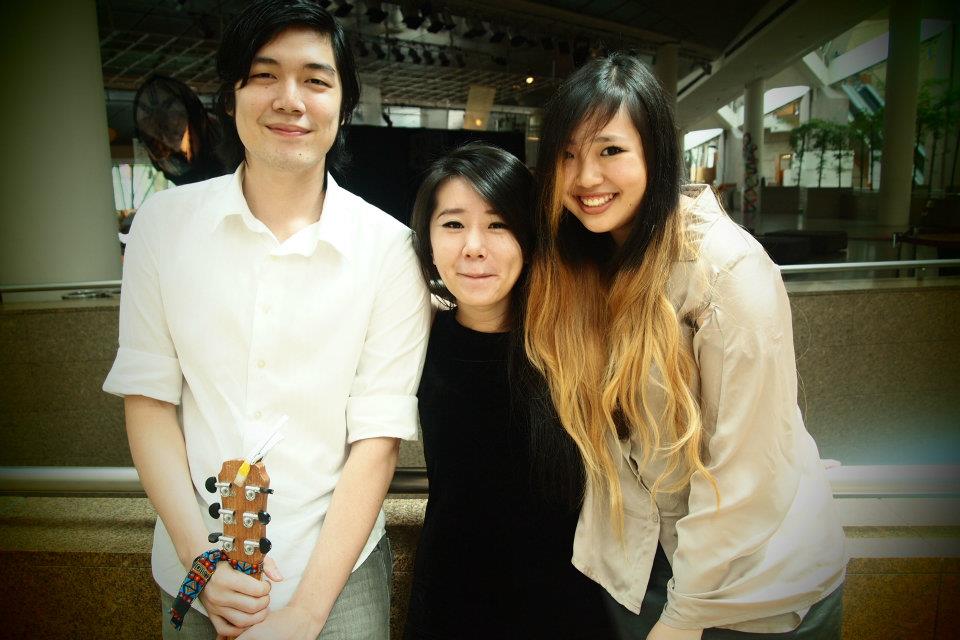 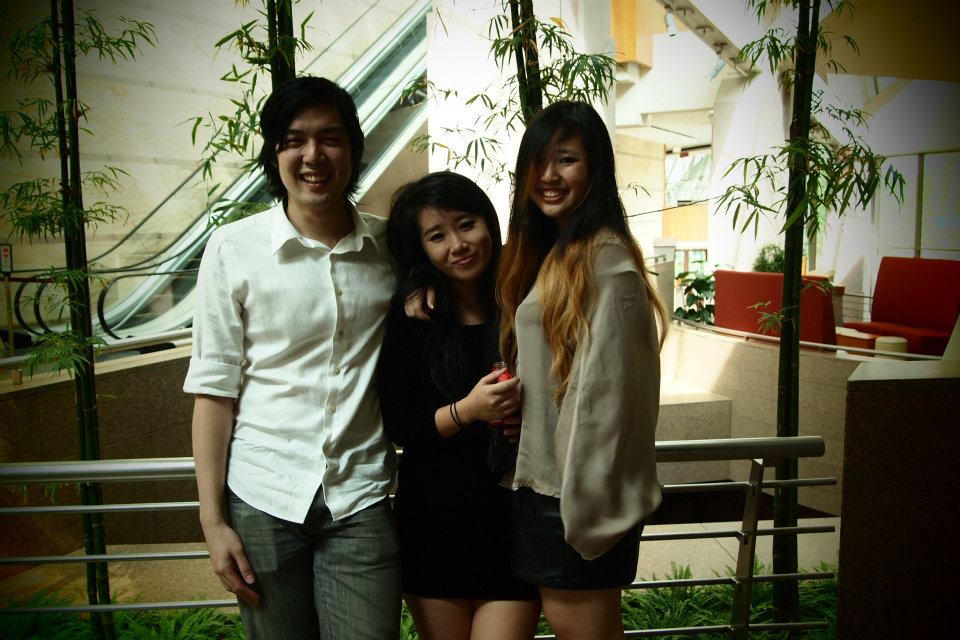 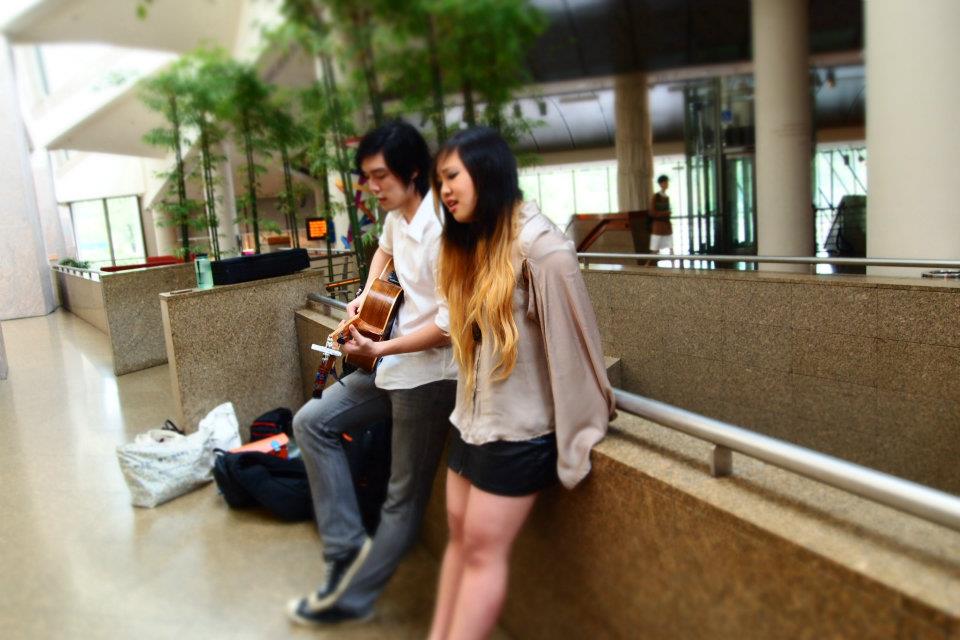 Mucking around behind the scenes while waiting for our turn to shoot. We were practicing payphone in the esplanade lobby, which drew a few strange stares..

Anyway, quote of the month from Marcus:

“The song payphone doesn’t make sense. if the call doesn’t go through your 10c gets refunded what.”

Evidently Adam Levine has never used a payphone before in his life. I bet his parents bought him an iPhone from the word go. Such a darling.

Marcus and I went for breakfast and then crashed Ferragamo Paragon to surprise Cindy with breakfast after that. Obviously, Ferragamo does not take too well to two (obviously broke) undergrads walking in suspiciously, holding a macdonalds paper bag and with a guitar slung over one’s shoulder. However, rest assured, friends. Our espionage/undercover skills are legendary. We had it set how it would go down if we got approached by sales staff.


Imaginary sales girl: Hi, can i help you?
Me: (turning to imaginary girl) yes, we’re having a slight dispute over the number of shoes i’m allowed to buy, actually.
Marcus: I think ten shoes is a ballpark figure, but why be inflexible, you know? Why not more? Why are our horizons so narrow?

At this point the imaginary sales girl will decide that she does not want to be involved in this conversation and quickly back off.

Some people might have told you that walking to LaSalle from Dhouby Ghaut would be a breeze. These people are lying to you. They lied to me too. I nearly died trying to find it and the weather, just so apocalyptic a mere five hours ago, was burning down the streets by 2pm and i nearly died.

The upside is, i did come across this on my way to LaSelle: 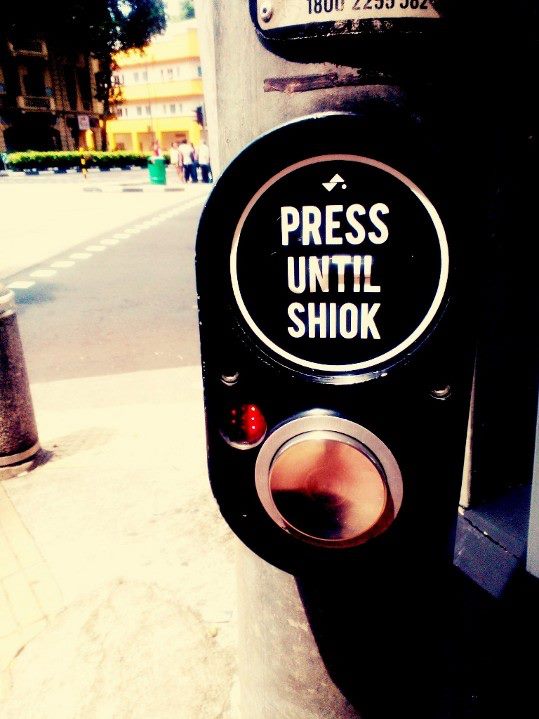 You might find it familiar, given all the kerfluffle that’s been going on around the internet regarding the arrest of sticker lady. When i saw this though, i had no idea what was going on and found it relatively hilarious.

Three thoughts on the situation:

1. stop calling her sticker lady. its a tragic nickname. it sounds like trash can lady, or bag lady. Would you like to be called the sticker boy/girl/person? No? Then for goodness sake, call her something else. How about SKL0, the online moniker she came up with? That sounds relatively artistic. There are CAPS LOCKED LETTERS and a digit in that.

there, i just really needed to say that. the nickname sticker lady has just been irking me the whole day
moving on,

2. (a) she broke the law but (b) it was an expression of artistic freedom. where does one go with this? should you put someone in jail for artistic freedom? do you let them off for breaking the law because of artistic freedom? lets not go into the basis of the law itself because God knows what the government is thinking, honestly. But you know what this reminds me of? The old lady who shot off two guys’ testicles because they raped her granddaughter. Especially the last line. Observe:

“What she did was wrong, and she broke the law, but it is difficult to throw an 81-year-old woman in prison,” Det. Delp said, “especially when 3 million people in the city want to nominate her for Mayor.”

3. I’m not an expert in public policy, nor do i have exceedingly strong views on laws and rules in Singapore. That is not to say that i am apathetic- i just don’t think i know enough to be yelling up impassionately about governmental practices. (though it would be nice if you lowered the COE, guys. the way i see it, my kids are gonna be cabbing to school all the time.)

But, i have a question. Say you’re a shopkeeper’s assistant, and in your hands you have a boy who stole a loaf of bread to feed his sick grandmother because she hasn’t eaten in days and his family is broke. Do you do the right thing and turn him in to your boss who you know will call the cops, or turn a blind eye?

My real question is- there’s a societally ‘right’ moral guideline and compass that we are supposed to live by. How much is this really worth? How much is your conscience worth?

The reason why i was going to LaSalle though, was for the MMC meeting we were having at 15 minutes, their in-school cafe. 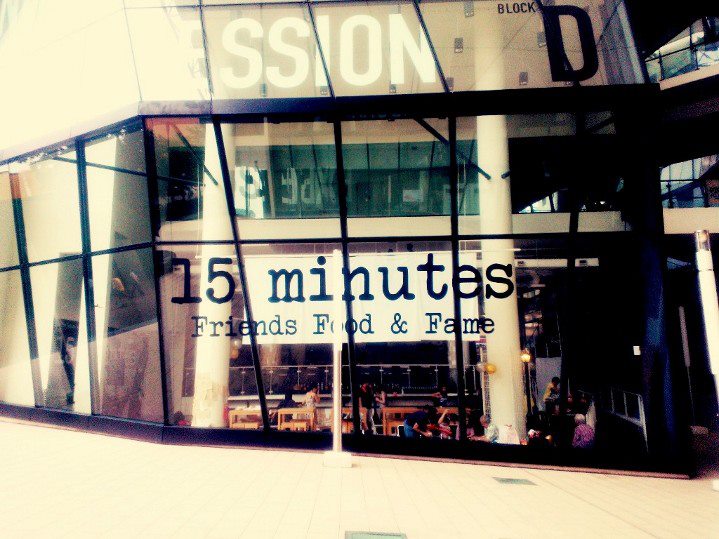 Now why doesn’t our NTU cafe express look like this?

I kid, of course. NTU is an internationally reputed research-intensive tertiary institution. Our broad-based education covers science and technology, business and the arts, entrepreneurial and leadership skills to prepare students for the global working world. The campus has 11 canteens and 3 cafes and a staff club offering a delectable array of cosmopolitan cuisines. We are all delighted and appreciative of the amazing cafeterial options we’re offered.

It says so on the NTU website, so it must be true. Come to NTU, kids! 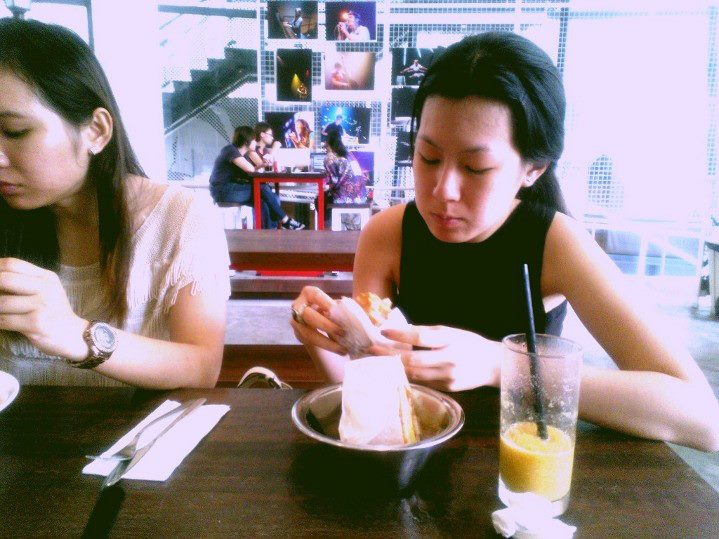 Besides that, I’ve been absolutely exhausted with work permeating every pore of my life. That day i had a nightmare about sending the right proposal to the wrong client. The next day i dreamt that lotus notes crashed and i couldnt access my work email for a full day and panicked and died. Of course, this was how i realized it was a dream. In real life, if my lotus notes breaks down, i would not look panicked and forlorn. I would bring out the master card and buy everyone a round of beer.

I really hate lotus notes is what i am saying, okay.

On a plus note- Christel is officially back in the office working for the Global team! 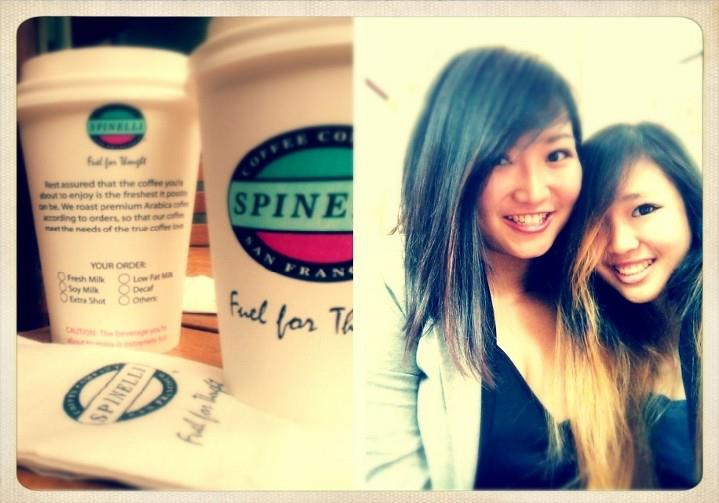 Also, our clients and media partners are being lovely. Last week, BBC sent over cupcakes in celebration of their upcoming Queen’s Diamond Jubilee and the 2012 Olympics 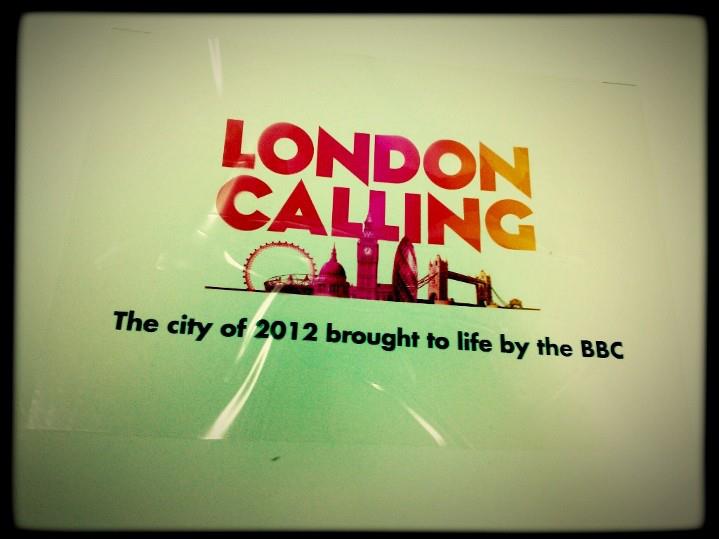 Today, a client dropped by with boxes of the hugest muffins ever: 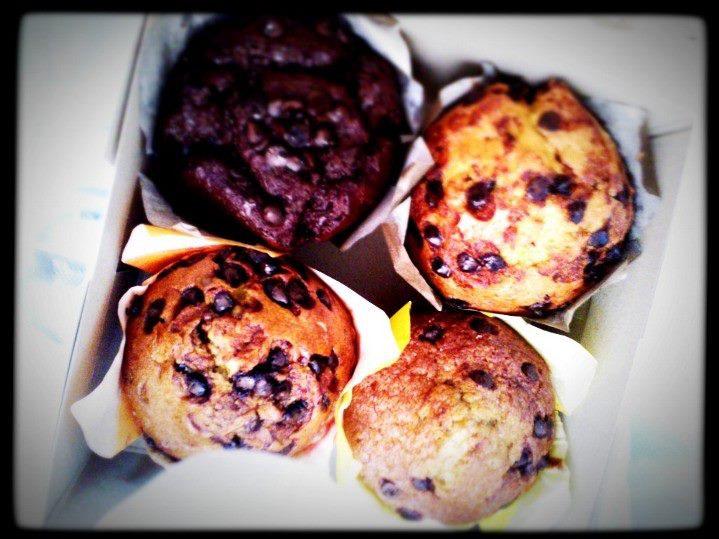 and in the afternoon, Yahoo came over with Tom’s Palette Ice Cream ‘in light of the recent scalding weather’. Incredibly sweet of them, i kept thinking it was christmas or something and checking my calendar for campaign launch dates. 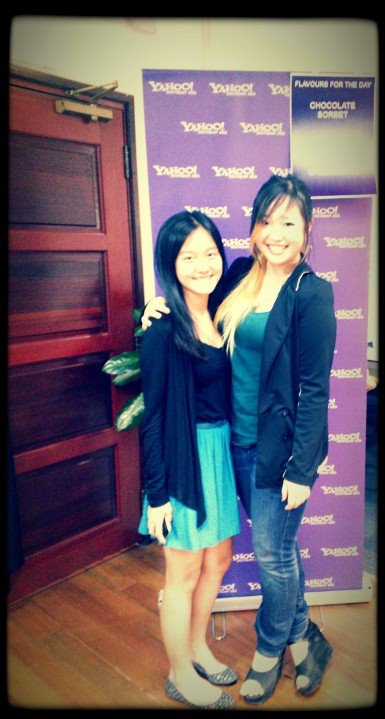 Also, Athena has been getting quite a bit of attention from all my friends who have been popping in to visit. They say they miss me, but i know what they’re up to. They really want to see the cat. I feel left out and overlooked all of a sudden. I feel like i’ve caught the Middle Child Syndrome. 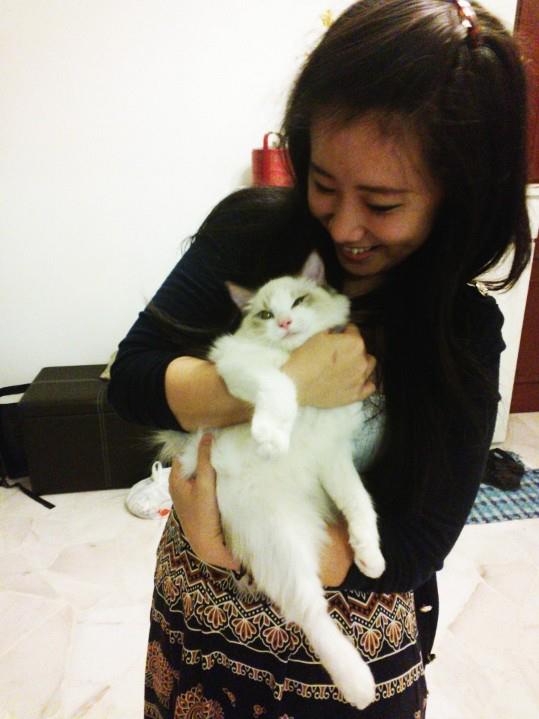 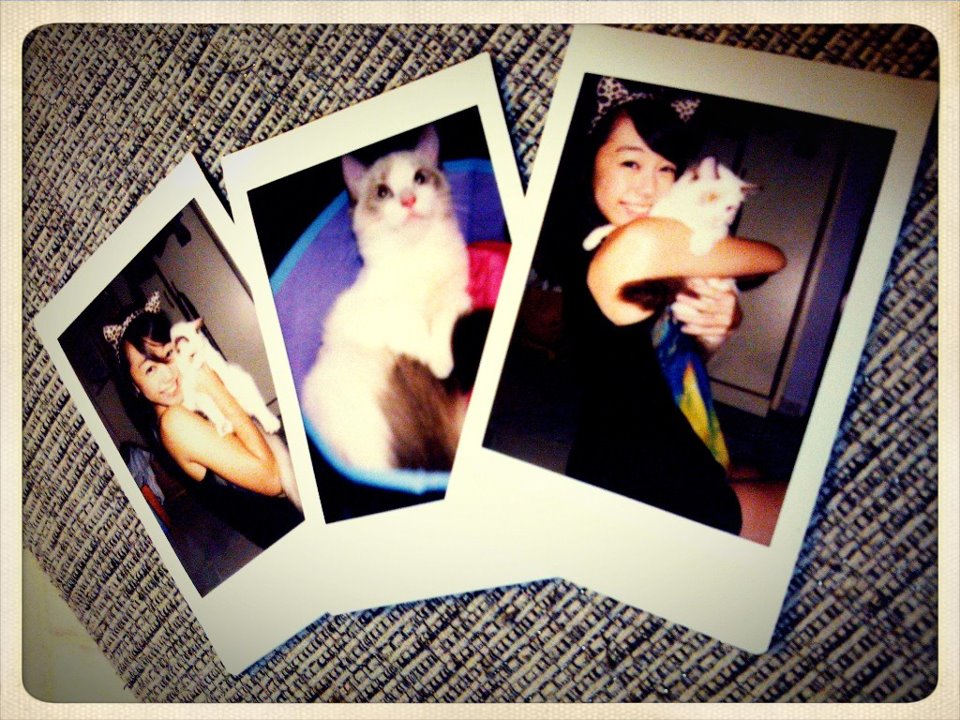 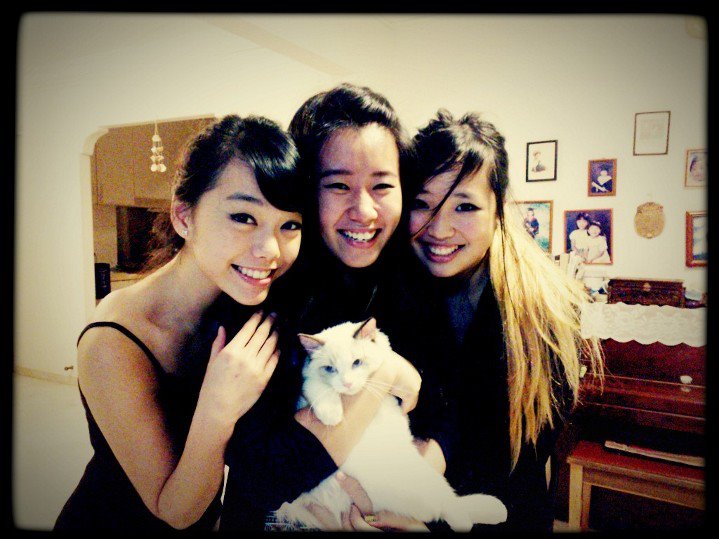 She continues to be unendingly cool and unruffled, just soaking up all the attention. In fact, she’s declared herself an extension of the computer: 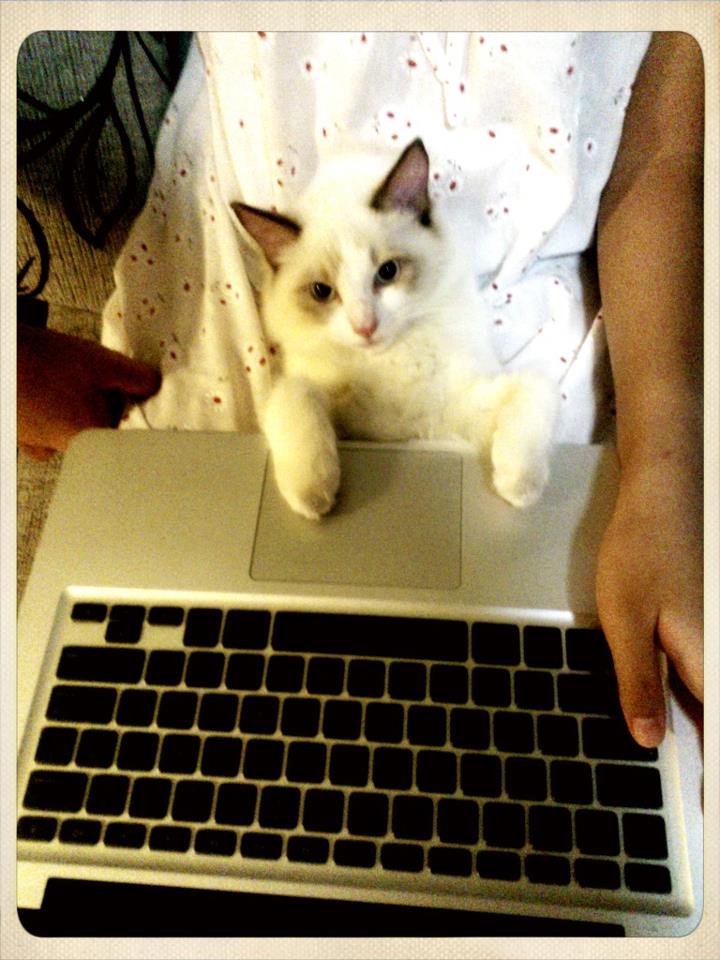 See what i mean. This cat. I don’t know what to say about it.

Oh, and last but not least!

Nokia UK has shipped over their latest Lumia 900 very generously for me to try out- so far, it’s been impressive and i like it lots, but this deserves its own blog post so i shall do a review and a lumia 800 vs 900 analysis soon. 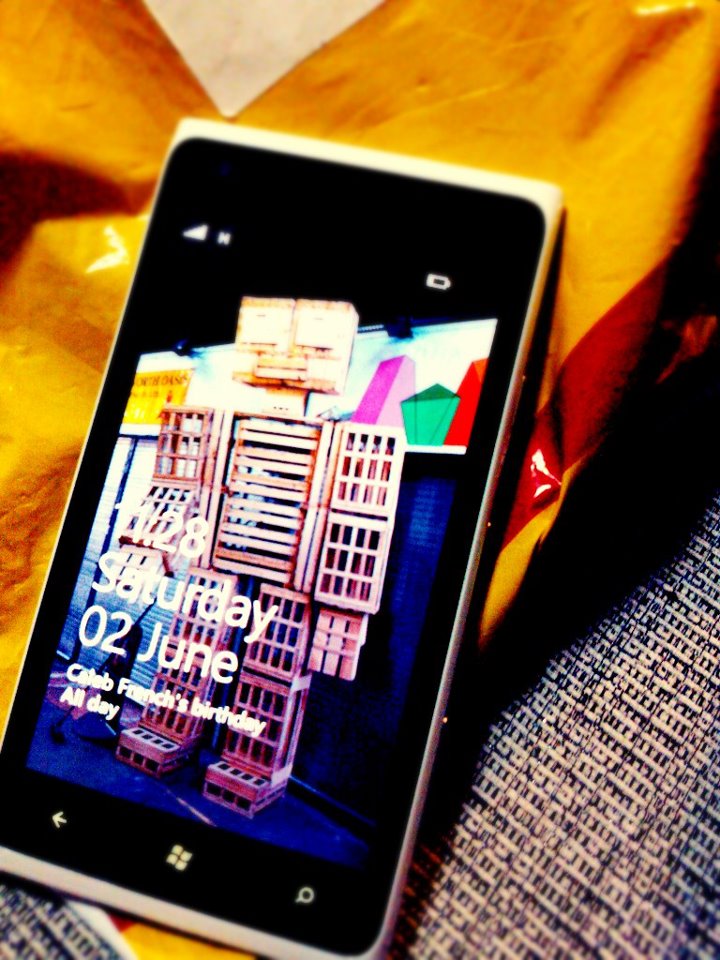 Right, i can’t stop yawning, so.