Currently listening to:Rolling in the deep by Adele
Status:MASSIVELY TIRED. 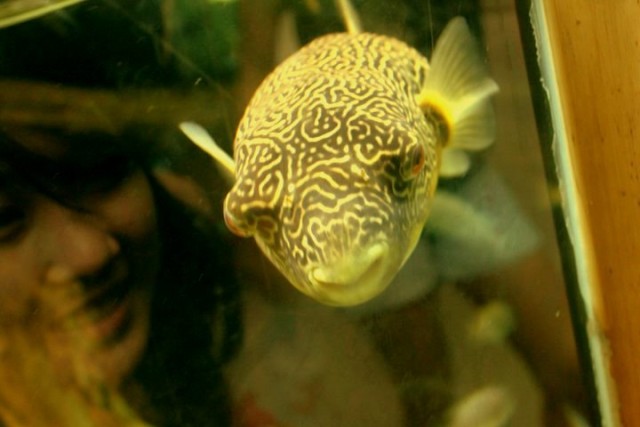 Would you look at that! A pufferfish!

Little bugger had a permanent smile plastered on its face, it was born with its mouth turned up on both sides i think (or maybe pufferfish are just like that).

Charmed a whole bunch of giggly girls. Guilty as charged.

I met Ashley on the train today.

Ashley: “Hey Jem, where are you going?”
Me: “The .. Zoo. Yes, i do realise it is raining why thank you very much.”
(Sa next to me smacks me and tells me to stop being grumpy about going to the zoo.)

So we went to the zoo.

Had quite a lot of fun, though i suspect that’s because of the company and not the location. (Was super grumpy about having been out-voted regarding the MS outing location- the ZOO, seriously?! it was raining! why cant we go to the science centre if we wanna relieve our childhood days?! etc etc) The zoo smells awfully like… Animal. Oh okay, that makes sense. The animals are gorgeous- We have one of the best Zoos in the world!!!! SINGAPOREAN PRIDE.

The last time i went to the zoo i was eleven. That’s a seven year gap, so im not intending to go back there till i’m.. twenty five. (Do not understand the rationale of going to stare at animals for hours and hours frequently, this can be a seven-yearly affair. Coincidentally, it looks like zoologist and zookeeper are both out of my career choices..) POLAR BEAR, YOU BETTER BE BACK BY THEN! Was kind of sad that i didnt get to see the polar bear and the penguins, they’re having some renovation upgrading thing.

Photos will be up tomorrow! The zoo was surprisingly really, really exhausting.